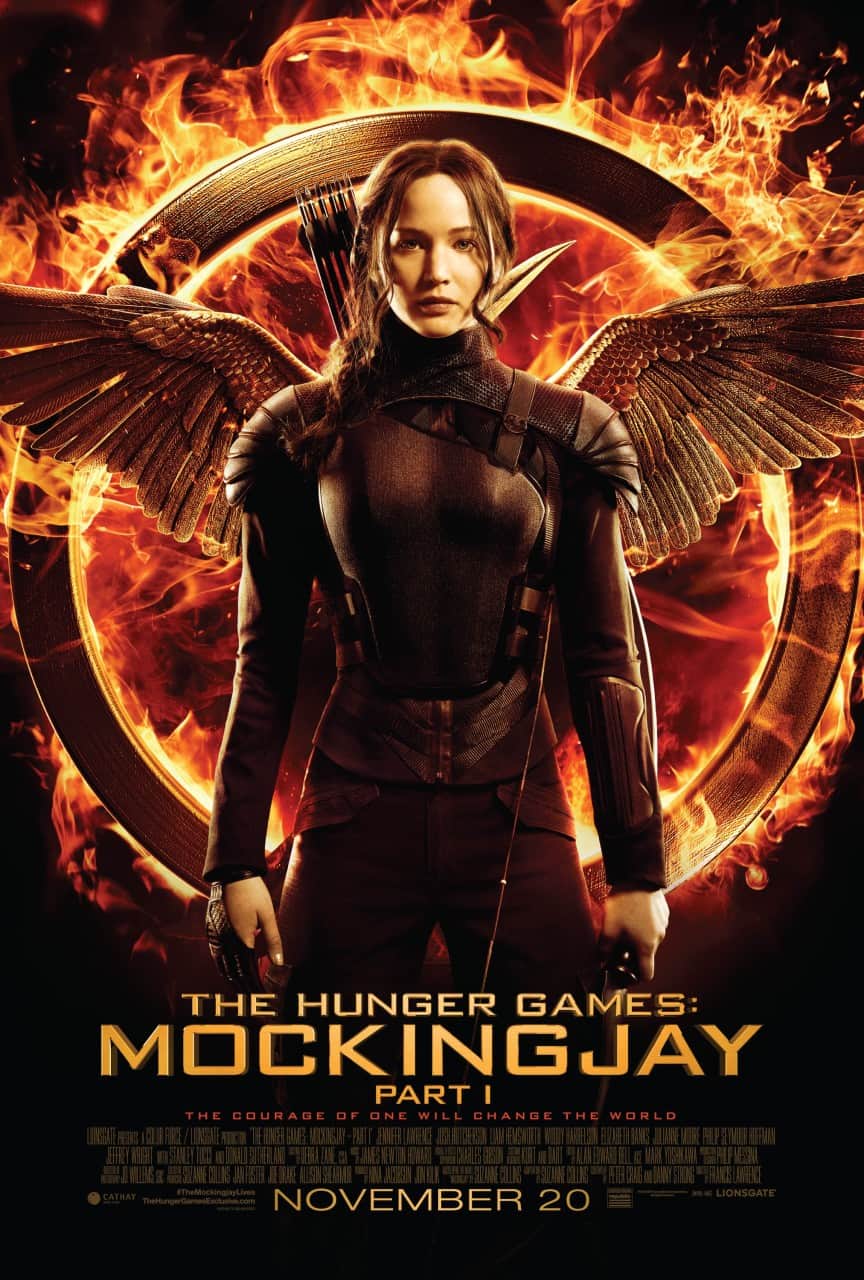 It’s time to raise the three-finger District 12 salute and whistle that four-note motif again because another Hunger Games movie is in theatres. Following her actions in the Quarter Quell, Katniss (Lawrence) has been whisked away to the secret stronghold of District 13. Her best friend Gale (Hemsworth), sister Prim (Shields) and mother (Paula Malcomson) are among the survivors from the Capitol’s bombing of District 12 taking refuge in 13. President Alma Coin (Moore), along with Plutarch (Hoffman), is in the midst of staging a revolution, calling on Katniss to become the face of the uprising. Despite being reluctant to after the trauma she experienced in the arena, Katniss assumes the role of the symbolic “Mockingjay”. Peeta (Hutcherson), who couldn’t be rescued, is held in the Capitol and forced by President Snow (Sutherland) to make televised appearances exhorting a ceasefire. Because of this, he is branded a traitor by the revolutionaries, but it only strengthens Katniss’ desire to rescue him and the other victors even more. 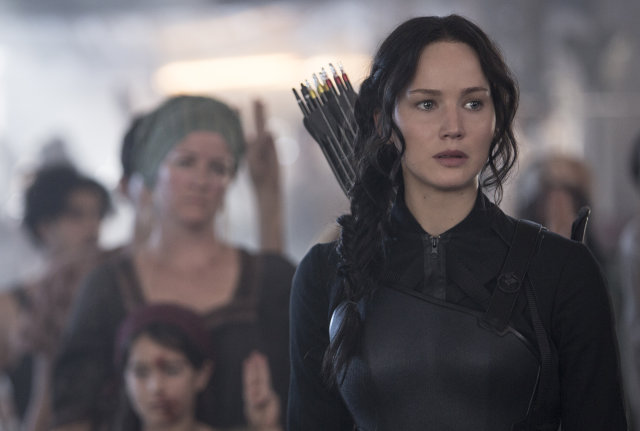 Mockingjay – Part 1 has followed in the footsteps of the Harry Potter and Twilight franchises by going the “last book adapted into two movies” route. Both Deathly Hallows – Part 1 and Breaking Dawn – Part 1 did a lot of treading water in padding things out. While Mockingjay – Part 1 fares far better than Breaking Dawn thanks to its denser plot, there’s still a degree of disappointment to be had from sitting through two hours of set-up, even if it is pretty good set-up. Introducing audiences to the subterranean District 13, there is the credible sense that this revolution is coming to a head. Moving past the Games themselves, we get to see more of the other districts, including the lumber-producing District 7, and power-generating District 5 with its massive hydroelectric dam. There is an increased sense of scale without it feeling like bloated and empty spectacle. There’s also more of the helicrafts in action, two of which Katniss shoots down with her bow and arrow. 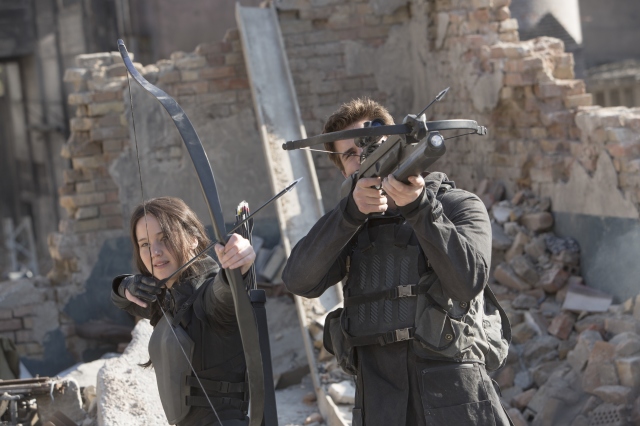 The film still is character-driven, Jennifer Lawrence returning to her star-making role with more of the drive, indignant determination and just the right amount of vulnerability she brought to the first and second films. Unlike a number of young adult novel adaptations, Mockingjay – Part 1 does a good job at establishing that there is much more to the story and the world than the protagonist’s personal struggles and heartache, without downplaying the importance of that. The premise of the franchise is televised bloodsport in which teenagers kill each other for the entertainment of the elite and to keep the masses in line. The role of media manipulation in shaping the perceptions of the public gets further explored here with the introduction of Natalie Dormer’s Cressida, a Capitol film director who defects to District 13. That the resulting propaganda films or “propos” end up looking like movie trailers is a sly, effective touch without having it go all Starship Troopers on us. 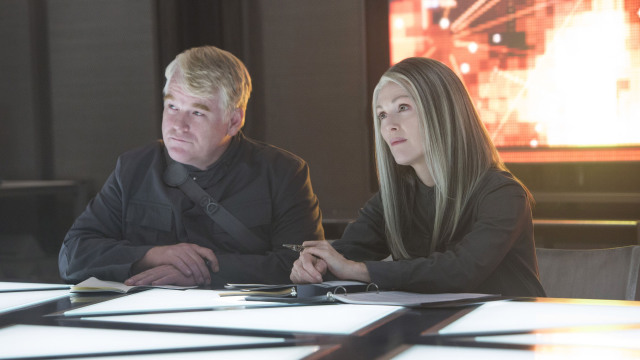 The politics of The Hunger Games is one of the key components that gives it an edge over other film series aimed at a similar demographic. Julianne Moore retains her stern exterior (looking more than a little like Ysanne Isard from the Star Wars expanded universe) but plays a warmer, kinder authority figure than moviegoers are used to seeing her as. Both skilled actors, she and the late Philip Seymour Hoffman make for believable collaborating revolutionaries – this marks their fourth time co-starring in a movie. The film is dedicated to Hoffman’s memory and while he completed shooting all his scenes for Part 1, some of Plutarch’s scenes in Part 2 will have to be distributed to other characters. 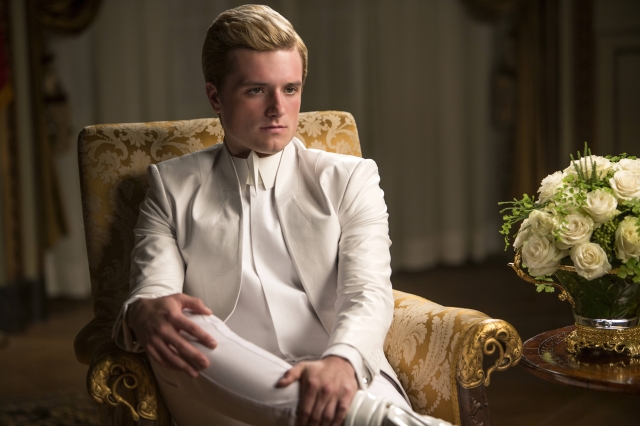 Much of the emotional content of the first two films was derived from the relationship between Katniss and Peeta and director Francis Lawrence uses the fact that the two characters are separated to generate a good amount of tension and anguish. Peeta being used as the Capitol’s new mouthpiece in his interviews with Ceasar Flickerman (Tucci) is contrasted and compared with how Katniss takes up the mantle of the Mockingjay for District 13. The role of Liam Hemsworth’s Gale is also expanded. It seems director Lawrence is all too aware that there are still detractors who dismiss this series as mopey teen romance, so scenes in which the love triangle is addressed appear sparingly. 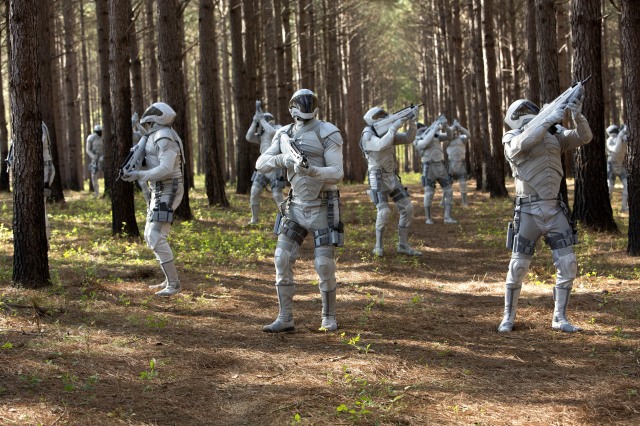 If Catching Fire was analogous to Empire Strikes Back, then Mockingjay – Part 1 is like if Return of the Jedi ended right after the escape from Jabba’s clutches. Perhaps this is an exaggeration, but there’s no denying that the climactic sequence, which director Lawrence has said was inspired by Zero Dark Thirty, feels like it belongs in the middle of a movie. Still, fans of the first two films are most likely more than willing to wait a year for the series’ conclusion and there is enough that takes place here to enticingly set the stage for the finale. 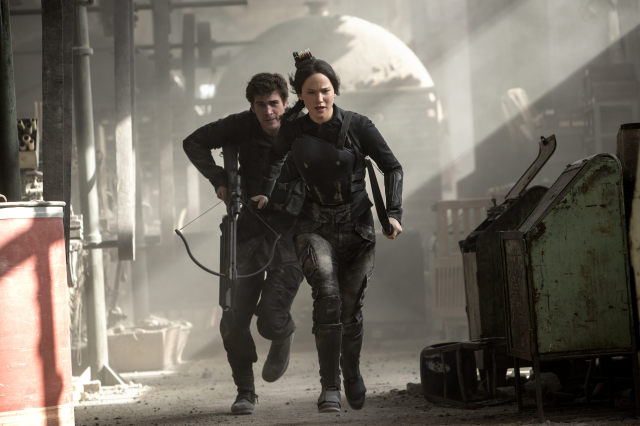 Summary: Despite suffering from “Part 1-of-a-two-parter-adaptation-itis”, the politics of Mockingjay and the turning gears of the revolution make this an intelligent, absorbing entry in the series.