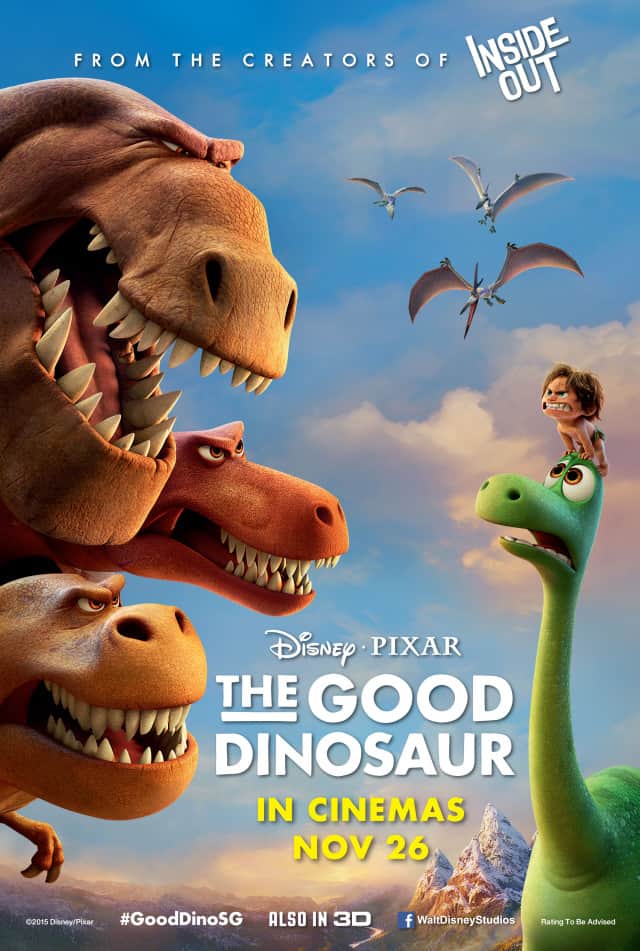 Pixar transports us back to an era when dinosaurs ruled the earth. Oh, and there are humans there too, no big deal. In an alternate version of prehistory, the asteroid missed the earth and the K-T Extinction that wiped out the dinosaurs never happened. Arlo (Ochoa) is the youngest in a family of Apatosaurus, living with his siblings Buck (Marcus Scribner) and Libby (Maleah Padilla) and their parents Poppa Henry (Wright) and Momma Ida (McDormand) on a farm. Arlo lacks self-confidence and while attempting to face his fears, he gets swept away by a strong river current, separating him from his family. A young caveboy named Spot (Bright) has been stealing corn from Poppa Henry’s silo, and while Arlo starts off viewing him as a nuisance, he gradually comes to befriend and care for Spot as they traverse the wilderness together. Among the characters they meet on their travels is a family of Tyrannosaurus, comprising Butch (Elliott) and his children Ramsey (Paquin) and Nash (Buckley). Arlo and Spot must survive the elements and hostile critters to make their way home safe and sound.

The Good Dinosaur is the second Pixar film this year after Inside Out, making 2015 the first year in the studio’s history in which they’ve released two feature films. The Good Dinosaur is a straight-forward, kid-friendly adventure film packed with breath-taking, realistically rendered environments and several cute character moments. However, we’ve come to expect more from this studio and the film lacks the wisdom and nuance that characterises some of Pixar’s best work. The film was originally intended to be released in 2014, and issues with the third act led to an overhaul, with Peter Sohn replacing Bob Peterson as director. The end result is largely safe, the coming of age story well-trodden territory for family films. There are story beats that seem lifted wholesale from The Lion King and there are no surprises as the narrative progresses.

The film is a take on the ‘boy and his x’ trope, except in this case the boy is a young Apatosaurus and the ‘x’ is a feral caveboy. Tales of cross-species friendship have long been fixtures of cinema and the example that leaps to mind in recent animation is How to Train Your Dragon. The bond between Arlo and Spot does possess a certain sweetness about it, but it doesn’t tug on the heartstrings as strongly as the connection between Hiccup and Toothless did. The generally high standard set by Pixar is its own undoing here. The environmental effects are expertly executed and the film has its share of colourful, eye-catching visuals, but the character design comes off as a little unsophisticated, like something that one would see in a typical children’s picture book. There is no shortage of neat physical humour, but the emotional through-line is undercut by the film’s episodic road trip nature.

Child actor Ochoa does capture the vulnerability of Arlo, but there is little to the character that adds to the stock underdog protagonist seen in many an animated movie. He’s picked on by his siblings and feels a need to prove himself, thrust into a journey in which he must discover “the strength that lies within” and all that. Bright must have had a ball of a time growling and yelping into the microphone as Spot, and there is a dynamism to the size contrast between the two lead characters. Wright’s kindly authority figure is reminiscent of a gentler Mufasa from the afore-mentioned The Lion King. The casting of Elliott, known for his roles in Westerns, as a cattle baron-type does feel more like a Dreamworks move than a Pixar one, but it’s still an amusing performance. The way the T. rexes are animated galloping comes off as jarring; it’s meant to evoke cowboys but it doesn’t quite work. The incidental characters include a pack of Velociraptor Rustlers that are, for all intents and purposes, the trio of hyenas from The Lion King.

The Good Dinosaur is touching and funny on occasion, but the maturity beneath the surface and the profundity displayed in the likes of WALL-E and The Incredibles is mostly absent. This will sound harsh, but especially in comparison with Inside Out, The Good Dinosaur feels like it was assembled by Pixar’s B-team. The wide open American Northwest landscapes are rendered with technical polish, and enhanced by Mychael and Jeff Danna’s Appalachian-tinged score, but the plot is formulaic to a fault. The predictability of the story is rescued by flashes of heartfelt sweetness, but The Good Dinosaur is ultimately an average animated film from a studio known for delivering masterpieces far above the average.

Summary: There’s nothing fatally wrong with The Good Dinosaur, but we’ve come to expect far greater things from Pixar than this pleasant but formulaic effort.