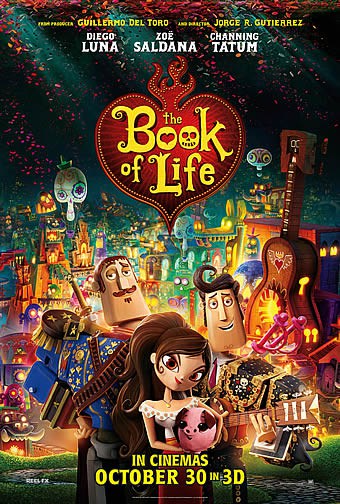 Many things could have gone wrong with The Book Of Life. This boisterous, big-hearted animated film is bursting with ideas and colour, stuffed to the brim with – one suspects – pretty much every idea that struck writer-director Jorge Gutierrez’s fancy. Indeed, the final film plays very much like the charming but unpolished debut of a filmmaker who can’t quite believe he was lucky enough to get the attention of producer Guillermo del Toro, and has no intention of wasting the opportunity in case it never comes around again. As a result, The Book Of Life practically trembles with too many ideas and influences, but remains so earnest and inventive that it’s easy to forgive its predictable, overstuffed plot.

In a small Mexican town on the Day Of The Dead, we meet the protagonists of the story: steadfast, earnest Manolo (voiced by Luna), who would rather strum a guitar than fight a bull in the tradition of his forefathers; brash, adventurous Joaquin (Tatum), who becomes the town hero in trying to avenge the murder of his father by bandits; and spunky, intelligent Maria (Saldana), daughter of the mayor who inevitably wins the hearts of both young men. The stakes, however, are higher than they could ever imagine: the two godly rulers of the underworld, La Muerte (Kate del Castillo) and Xibalba (Ron Perlman), have gambled dominion over each other’s lands on the outcome of the love triangle.

It would be an understatement to say that there’s a lot going on in The Book Of Life. The film covers everything from a mystical medal that lends invulnerability to anyone who wears it, to a tantalising love-hate relationship between the two gods, while spiced up with musical interludes galore. (It’s not often that the film’s hero will pause to belt out a soul-searching rendition of Radiohead’s Creep, but that kind of thing happens all the time in The Book Of Life.) Mix it all up with retellings of Mexican folklore, including visits to the joyously colourful Land of the Remembered and the ghostly grey Land of the Forgotten, and the film can be a somewhat frenetic viewing experience, to say the least.

But, for all that Gutierrez packs his film full of ideas and details, he also manages to make most of it work very well. The love triangle may be trite, but there’s nevertheless enough heart and humour holding Manolo, Maria and Joaquin together. Manolo’s relationships with his dad Carlos (Hector Elizondo) and his departed mom Carmen (Ana de la Reguera) are coloured in with surprising depth as well. It’s also wonderful to see a love triangle centred around a girl who knows her own mind – and rest assured that Maria speaks it often enough to make a real impact.

The Book Of Life also doubles as a very welcome riot of imagination and tradition. Every frame of the film is beautifully and thoughtfully designed, down to the fact that Manolo seems to have been intricately crafted out of wood. Moreover, instead of shying away from its Mexican roots to increase its global marketability, the film firmly embraces them. This gives Gutierrez room to craft some delicately dark moments in a graveyard or two, reminding everyone that those who have died can still live as long as they’re remembered by the ones who loved them. And yet, the film never descends into darkness, instead tapping into the giddying energy of a fiesta – most memorably in a journey through the Land of the Remembered – complete with heady bursts of colour and music. 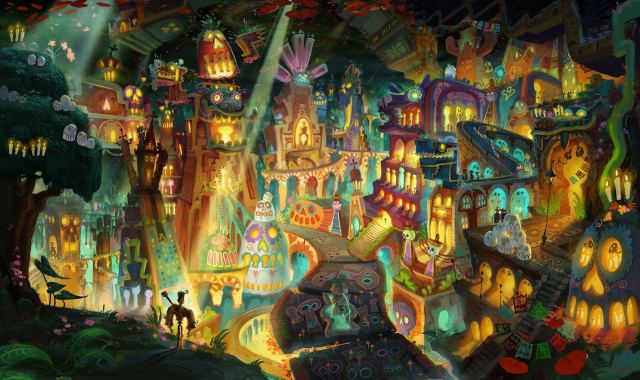 There’s no denying that Gutierrez’s film can occasionally be too much to handle. It’s loud and almost cheerfully silly, tossing pop songs and Mexican folklore into a mix that sometimes doesn’t work. But, at its best, The Book Of Life is like a rambunctious puppy: messy, loud and insistent, but radiating so much life and charm that it becomes quite impossible to resist.

Summary: Messy and overstuffed, but crackling with life, energy and colour.