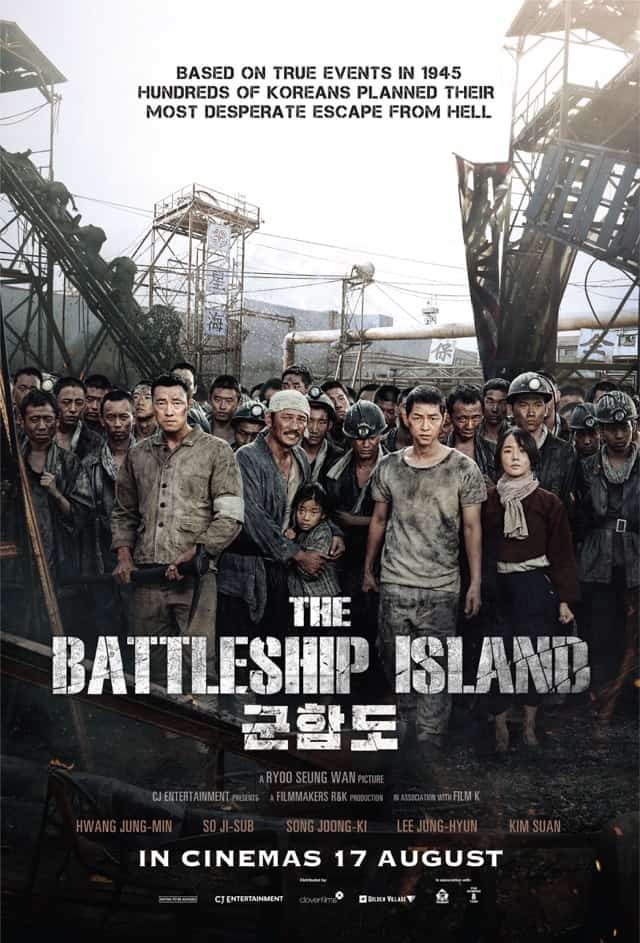 The Battleship Island tells the tale of Japanese war crimes, specifically forced labour and sex slavery suffered by the Koreans on the Hashima Island, otherwise known as the film’s title. The most heinous crime, though, was the Japanese military trying to bury 400 Koreans along with the ugly truth of their inhumane treatment. The Battleship Island is a film filled with unabashed gore and violence delivered with brilliant camera work.

The Battleship Island doesn’t attempt to be an accurate representation of history, as explained by director Ryoo Seung-Wan when Japanese newspaper Sankei Shimbun criticised the film of warping the truth. Ryoo’s intention, though, was to show “how war can make [a] man a monster” regardless which side people are on. Viewers must walk into the cinema understanding The Battleship Island is less of a historical film and more of a historical fiction film. It is nonetheless, a beautiful film in its own right, presented through brilliant cinematography. From the colour grading choices to the visual effects, the smooth camera tracking to picturesque aerial views of the set, which by the way, is actually a recreation of the actual Hashima Island.

Ryoo and his team showcased their deep understanding and technical capabilities in pulling off a war epic through extended fight scenes. The camera work and sequencing were on point, especially the lead up to the face-off between the captors and captives. With a low eight-figure film budget, Ryoo showcased dazzling visual and practical effects, comparable to action films with much deeper pockets. The Battleship Island opened with a sequence of grayscale only to end with another. It subtly nods to the fact that escaping the battleship island of hell was not the end of their suffering.

Unmistakably, The Battleship Island is a film made especially for the Koreans. The film touches on several themes, mainly social and political, close to the middle-aged and elderly generations. One theme that stuck out the most is the apparent familial separations inevitable during war time, represented by the single father and daughter duo. The film also traversed on a slippery slope, a topic familiar to Koreans who went through the silent fight for independence, and their children. The suppression during the Japanese occupation and Korean “comfort women” issue are controversies between the two neighbouring countries still lingering up to today, leaving an unpleasant taste in the mouth. Nonetheless, Ryoo and his co-writer Shin Kyoung-Il merely touch-and-go on the sensitive topics and placed more emphasis on the human element in a tragic historical event through fictional characters. A good attempt to say the least, with the convincing performances and selected meaningful character developments placed intelligently throughout the film.

Kim Soo-An plays as a single father’s little girl, and her performance is stellar in The Battleship Island. If that name rings a bell, that’s because Kim acted in another Korean-movie-turned-international-sensation, Train To Busan. Kim has an innocent charm that justifies every character’s desire to protect her in the film, most of them even going so far as to sacrifice their lives. Director Ryoo Seung-wan gave her sufficient screen time for character development to lead up to a wonderfully executed tear-jerking moment.

Let’s not forget Hwang Jeong-Min who played as Kim’s father in the film, doubling up as the leader of a musical band and con man of sorts. With decades of experience to Hwang’s name, he impresses with a near-flawless performance as a loving father willing to go to any lengths for his daughter. Most of his character’s interactions with other inhabitants of the battleship island make it hard to take him seriously, but he is more than just comic relief. The loving father compensates with his resourcefulness to manoeuvre his way around the Japanese soldiers and leaders with the sole purpose of surviving with his daughter.

Song Joong-Ki, arguably the most favoured actor among the main cast, doesn’t play a character viewers can care much for. Not much explanation goes into why and how Song’s character is sent as a spy-cum-escort to the battleship island. He is merely your typical impervious hero who doesn’t die despite getting shot multiple times over the course of just a few days. Song pulls off his role, though, with a decent performance coupled with several impressive action stunts clearly performed by himself. For viewers who love Song for his similar military hero role in Descendants Of The Sun, a Korean drama viewed by millions all over the world, his charismatic screen time is worth admiring despite his flimsily written character.

Last but not least, we have a rebel pair who had a painfully obvious sexual tension between each other the moment they interacted. So Ji-Seob and Lee Jeong-Hyeon assume both the roles of satisfying the romantic element essential in most mainstream movies and standing up for justice under the Japanese oppression. Their performances were impressive but not central to the plot, thereby not receiving more screen time. It gives the audience a bland but necessary reminder that The Battleship Island is a war epic and not a romantic comedy. So and Lee are undoubtedly great, delivering stunning performances that make audiences care while not overshadowing the Hwang-Kim father and daughter duo.

Nothing much can be said for the Japanese oppressors, who are depicted as nothing more than caricatures. Little effort was put into their characters, which fits very well with Ryoo’s intention. It’s almost a blatant signal for the audience not to take those characters seriously, giving more reason to only root for the Koreans. Even then, Kim In-Woo and Kim Joong-Hee, who played the two most important lead roles of the Japanese side, don’t hold back in being as obnoxious as possible to incite the audience’s hatred for them.

In a nutshell, the fictional characters and their stories are great crowd pleasers for audiences who love the typical Korean romantic drama plots. The emotional parts of The Battleship Island serve merely as a distraction and relief from its brutal and gory tone of a war epic. However, other than telling several interesting and heart-wrenching subplots, The Battleship Island alludes to little except how inhumane wars are. Most of the action scenes are more of the production team demonstrating their technical abilities than adding flesh to the plot. For the weak stomachs, the gore and violence might be overwhelming and unnecessary, especially the extended scenes with grotesque details. Nevertheless, the technical aspects were indeed well-executed, and it was satisfying to see the antagonists literally burn up in flames at the end of it all. The Battleship Island rightfully achieved what it set out to do, though it is more of a technical success than anything.

Summary: The Battleship Island is a historical fiction film told in the perspective of several interesting characters delivered with beautiful camera work but narratively lacking.