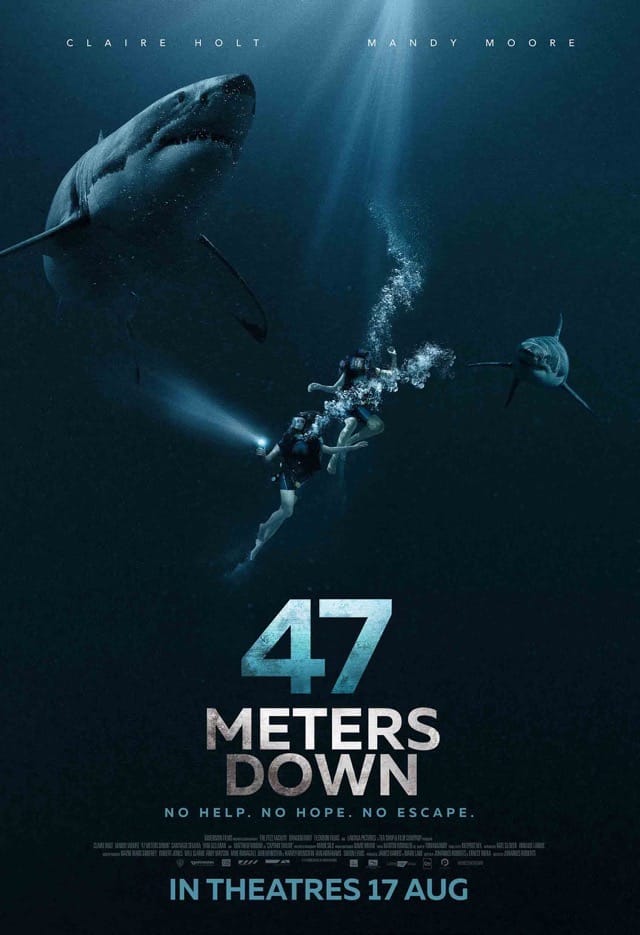 What would horror movies be without American tourists making horrible decisions? From Hostel to Turistas to Chernobyl Diaries, filmgoers have witnessed would-be fun vacations turn horrifying in the blink of an eye. In this thriller, Lisa (Moore) and her younger sister Kate (Holt) are on vacation in Mexico. Lisa’s boyfriend Stuart has just broken up with her, claiming Lisa made the relationship boring. Two handsome strangers (Gellman and Segura) whom the sisters meet convince them to go on a shark cage dive. After all, what better way to prove Lisa isn’t boring? Kate has some diving experience and Lisa has none, so Lisa is initially reluctant, but goes along with her sister anyway. Captain Taylor (Modine) takes the sisters out to a rickety boat, and they get into an even ricketier shark cage. Lisa’s worst fears are realised when the cable holding the cage snaps, sending the sisters plummeting to the ocean floor. Trapped and surrounded by great white sharks, Lisa and Kate must find a way out of their predicament before they run out of air.

47 Meters Down is one of those movies that must’ve made a great elevator pitch: two women get trapped in a shark cage at the bottom of the ocean. We have seen films built on intriguing premises that fall apart after a while, the high concept unable to sustain a feature-length film. 47 Meters Down has its genuinely thrilling moments, but even running a lean 85 minutes, it feels padded out, with it being around 20 minutes before our heroines step into the shark cage.

The film is built around a set piece, so director/co-writer Johannes Roberts and co-writer Ernest Riera don’t seem to be particularly concerned with crafting compelling characters. It’s all about the situation the characters are trapped in. It’s inevitable that any shark movie be compared to Jaws, the granddaddy of them all. It’s important to remember that Jaws had Brody, Hooper and Quint, and the dynamic between those three characters was as important to the movie as the shark was, if not even more so.

The sharks created by Outpost VFX look sufficiently convincing, but they don’t pop up quite as often as this reviewer would’ve liked. Even if there isn’t enough to the protagonists to care deeply for them, Roberts generates a visceral sense of panic and there are just enough jump scares without overdoing it. Any film is bound to take artistic license with the subject matter at hand, and any expert diver will probably be beside themselves with amusement and bemusement at the dive science on display in 47 Meters Down. Even for non-experts, some moments strain suspension of disbelief. The articles that break down the myriad inaccuracies in 47 Meters Down are expectedly technical, but make for interesting reading after watching the film.

47 Meters Down is a low-budget film that boasts above-average production values. Thanks to cinematographer Mark Silk, production designer David Bryan and other crew members, it’s easy to believe that Kate and Lisa are in the waters off Mexico when the film was mostly shot in a modest tank in Essex. As with many horror movies, 47 Meters Down is sometimes guilty of using the score to signal when audiences should be frightened – then again, that could be seen as merely following the example set by Jaws.

This reviewer quite enjoyed last year’s shark thriller The Shallows. What made that film better than 47 Meters Down was that audiences could assign a certain intelligence to the shark, and that it played out as a game of wits between the protagonist and her toothy tormentor. 47 Meters Down isn’t quite as inventive and is consequently not too memorable, but when the scares work, they work.

Summary: A spare thriller with just enough jolts to keep it afloat, 47 Meters Down is gripping in parts, but is also repetitive and even at just 85 minutes, feels too long.