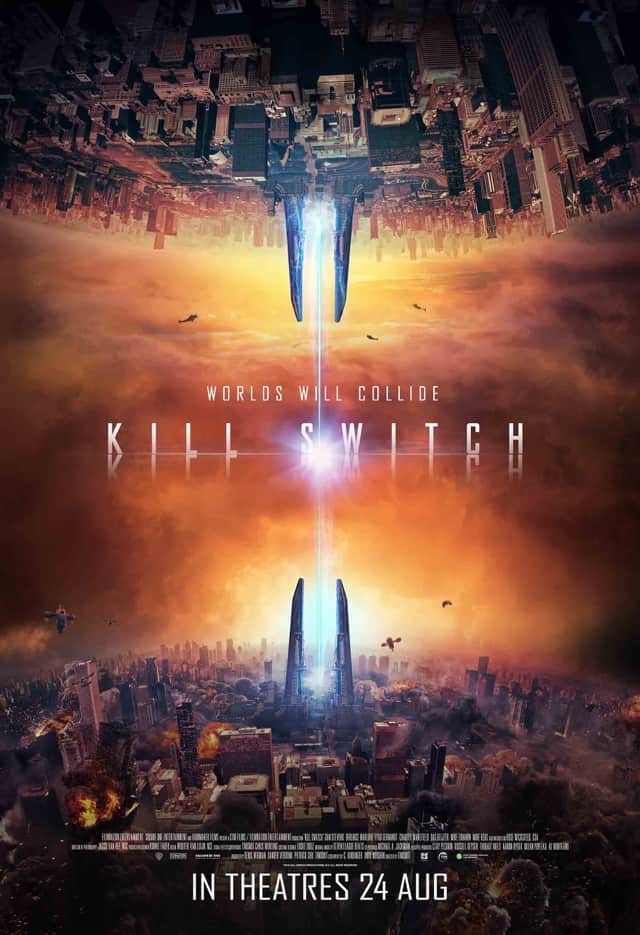 Dan Stevens looks set to be 2017’s breakout leading man. This year alone, The Downtown Abbey star can be seen in Beauty and the Beast, Colossal, The Ticket, Norman: The Moderate Rise and Tragic Fall of a New York Fixer, Permission, Marshall and The Man Who Invented Christmas. He’s also on TV, playing the lead in Legion. In this sci-fi action thriller, Stevens must stop the implosion of existence as we know it.

It is the year 2043, and Will Porter (Stevens), a physicist and pilot, is recruited by the massive corporation Alterplex. The company is on a mission to harness energy from parallel universes, hiring Will to travel to a realm known as ‘the Echo’. The experiment goes awry, and Will finds himself being pursued by a phalanx of heavily-armed mercenaries, and waves of deadly drones. Will must transport a mysterious obsidian box called the ‘Redivider’, which functions as a kill switch, to Alterplex’s tower. If he fails, his sister Mia (Wakefield) and her young son – not to mention the entire population of the world – will perish. Will discovers that Abigail Vos (Marlohe), the Alterplex employee who recruited him, might not be all she claims. Amidst the chaos, a rebel organisation that plans to undermine Alterplex might just be Will’s only hope.

Kill Switch is based on director Tim Smit’s 2009 short film What’s in the Box? Filmed from a first-person perspective, What’s in the Box? garnered considerable interest online because of the possibility that it was linked to the long-rumoured video game Half-Life 3 (it was not). The feature-length version is a perplexing, frustrating, but intriguing film. All the action scenes are filmed from a first-person perspective, giving this a video-game-like feel. Because it’s set in two parallel worlds and has the queasiness-inducing factor of filming chaotic, frenetic shootouts and pursuits in that format, Kill Switch is disorienting and is far harder to follow than it should be.

Smit is a visual-effects artist whose first feature film is Kill Switch, and it’s an ambitious debut. Shot in the Netherlands with a largely Dutch crew and several Dutch actors in the cast, the computer-generated effects work is solid and rivals Hollywood productions with much larger budgets. There are certain glimmers of cleverness: the original title of the film was ‘Redivider’ which, like the name ‘Tim Smit’, is a palindrome. Unfortunately, Smit’s focus is clearly trained on the visual effects spectacle, with the plot suffering as a result. While the screenplay by Charlie Kindinger and Omid Nooshin packs in exposition to explain the sci-fi workings of it all, it’s still tough to make head or tail of the proceedings.

Stevens has an intensity to him that sets him apart from the bland, cookie-cutter action leads in Hollywood who are sometimes hyped as ‘the next big thing’. He takes this far more seriously than he has to. The unique thing about the role is that, because all the action scenes are filmed in the first-person perspective, he doesn’t perform any of the action, merely providing the voiceover for those scenes.

Marlohe, best-known for playing a Bond girl in Skyfall, makes for a stiff femme fatale. Interestingly, Will is not in a romantic relationship with any of the female characters, which is another element that differentiates Kill Switch from the average action thriller. Mia is Will’s sister, when in any other film, that character would be the male lead’s wife instead. It’s a shame that Will’s bond with his sister and nephew gets insufficient development, and the potentially emotional scenes fall flat.

Low-to-mid-budget science-fiction films usually pique this reviewer’s curiosity, since conventional wisdom dictates that futuristic films are expensive to pull off convincingly. Kill Switch is sporadically fun, the visual effects are confidently and competently executed, and Smit shows considerable promise in an audacious debut. However, the first-person perspective gimmick wears out its welcome all too quickly, and the ‘gee whiz’ sci-fi plot is confusingly rendered.

Summary: Recommended only for curious sci-fi fans, Kill Switch boasts impressive production values that are in service of a muddled narrative.