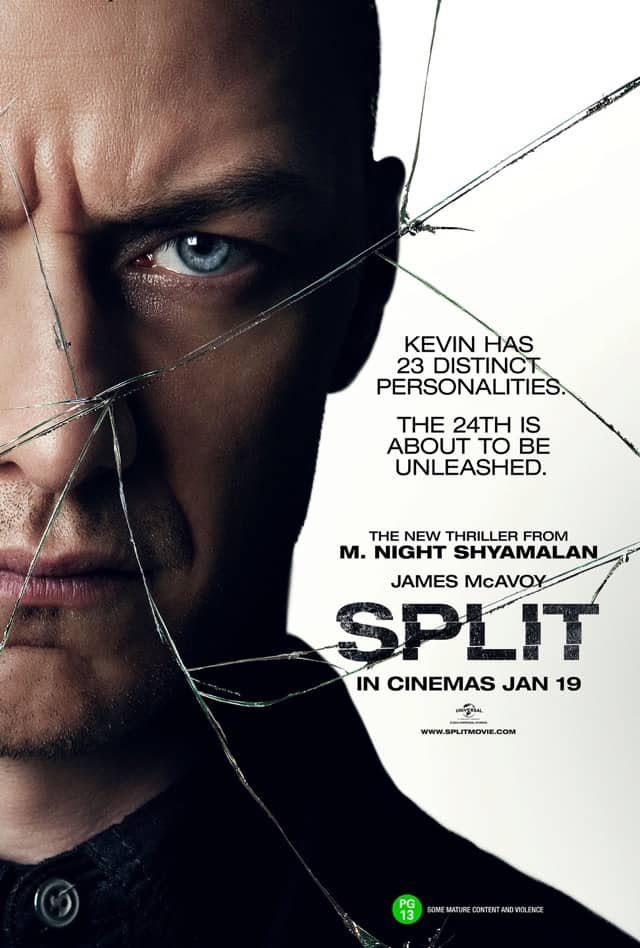 The X-Mansion is crowded enough as it is, what with all those gifted youngsters, but imagine if there were 24 Professor X-es running about the place. In this psychological thriller, James McAvoy plays Kevin Crumb, a man with Dissociative Identity Disorder. Kevin has 23 distinct personalities or ‘alters’, including a young boy named Hedwig, a flamboyant fashion designer named Barry, schoolmistress-type Miss Patricia and the severe, obsessive Dennis. Kevin kidnaps Casey (Taylor-Joy), Marcia (Sula) and Claire (Richardson) in broad daylight as they are leaving Claire’s birthday party. Casey, a social outcast at school, attempts to decipher Kevin’s behaviour and plot an escape for the three girls. In the meantime, Kevin’s therapist Dr. Karen Fletcher (Buckley) suspects that something is amiss with her patient, but is unaware of his criminal activities. The various alters ominously warn that a 24th personality, named ‘the Beast’, is about to emerge.

Writer-director M. Night Shyamalan has busied himself with paving a path towards redemption. With a string of high-profile missteps, the once-lauded auteur who was heralded as the next Hitchcock or Spielberg quickly became a laughing-stock. With 2015’s The Visit, Shyamalan returned to lo-fi suspense horror, and he re-teams with producer Jason Blum for Split. While nowhere near as embarrassing or inept as The Happening and Lady in the Water, Split is problematic.

First, the good: the film is often tense and creepy and with McAvoy firing on all cylinders, is largely engaging. The bad: Split takes advantage of how controversial and misunderstood Dissociative Identity Disorder is, playing up many misconceptions and potentially demonising the mentally ill. Sure, this is fiction and many viewers won’t take offence because it isn’t intended to reflect reality, but it reminds us of horror movies in which physical deformity is used to signify that someone is evil. Nobody is going to walk into Split searching for clinical accuracy, but it seems lazy of Shyamalan to use mental illness as a plot device in this way.

Joaquin Phoenix was originally cast in the role and Split would’ve reunited Phoenix with his Signs director. McAvoy is fully committed to the challenging part, but have a feeling that Phoenix would’ve been significantly more menacing in the role. McAvoy is creepy enough, but is also goofy. This performance can be viewed as little more than a string of funny voices and exaggerated mannerisms. It’s a valiant effort and however tasteless the premise, we will admit that the concept of a movie villain who unpredictably manifests multiple personalities is unsettling and potentially compelling.

Taylor-Joy, the breakout star of The Witch, is haunting and mesmerising as Casey. A misfit with a dark past, Casey gets character development by way of flashbacks which show her hunting with her father and uncle. When it’s ultimately revealed, her back-story turns out to be clichéd and emotionally manipulative. The most interesting bits of the film are Casey’s attempts to get into Kevin’s head and to play his alters against each other. Alas, there’s not nearly enough of that. Despite Shyamalan’s effort to give Casey an air of mystery, she ends up embodying many recognisable horror movie heroine tropes, right down to being pursued through a basement by, for all intents and purposes, a slasher film villain.

To throw Casey into sharper relief, both Marcia and Claire are given very little character development and fade into the background. We also have to endure stretches of dialogue, with which Shyamalan demonstrates how he thinks teenage girls talk. Buckley’s psychiatrist character, a well-meaning elderly woman who finds herself in over her head, seems intended to give the film’s portrayal of mental illness a modicum of credibility. However, Dr. Fletcher amounts to little more than yet another plot device. At least it’s more dignified than her role as the creepy lady in The Happening who demanded to know why Mark Wahlberg was eyeing her lemon drink.

Many critics are praising Split as a return to form for Shyamalan, but we’re not so convinced. For all its atmospherics and McAvoy’s wild lead performance, Split is about someone who kidnaps (maybe kills?) young women because he has a mental illness, extrapolating this premise into B-movie horror hijinks. It’s not the first movie to demonstrate a misunderstanding of mental illness, nor will it be the last. If that’s something you can overlook, Split has its thrilling and entertaining moments. In lieu of a big Shyamalan signature twist, Split serves up a surprise connection to an earlier film in his oeuvre (hint: it’s not The Last Airbender).

Summary: Split gives James McAvoy a meaty, showy role, but that doesn’t diminish how tasteless it is to play mental illness for scares. Still, Shyamalan should continue down this path of smaller-scale, performance-driven thrillers.