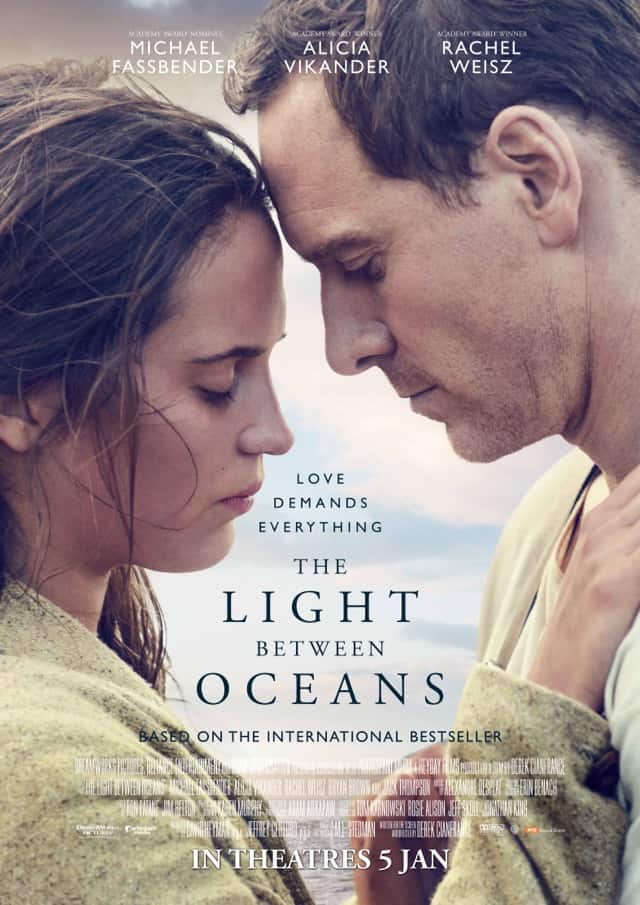 In this period romantic drama, there’s a lighthouse – it’s situated on Janus Rock, off the coast of Western Australia. There’s a man – World War I veteran Tom Sherbourne (Fassbender), in search of a quiet existence after braving the horrors of war. Tom becomes the lighthouse keeper of Janus Rock, and falls in love with local girl Isabel Graysmark (Vikander). Tom and Isabel marry, the couple keen on having children. One day, a rowboat washes ashore. Its occupants: a dead man and a newborn baby girl. Isabel convinces Tom that they should raise the girl, whom they name ‘Lucy’ (Clery), as their own daughter. Tom later spots a woman visiting the grave of her husband and daughter, who were lost at sea the day Tom and Isabel found Lucy. This is Hannah Roennfeldt (Wesiz), and it turns out that Lucy is indeed her daughter and is actually named Grace. This revelation torments Tom and Isabel, who know it’s the right thing to return Lucy/Grace to her biological mother, but who have grown attached to her after raising her as their own child.

The Light Between Oceans is based on the 2012 novel of the same name by M.L. Stedman. Writer-director Derek Cianfrance, known for The Place Beyond the Pines and Blue Valentine, stated that he had set out to make “a John Cassavetes movie in a David Lean landscape”, which is quite the lofty goal. The Light Between Oceans has the makings of an old-fashioned, sweeping romance, bolstered by the picturesque setting of Stanley, a seaside town in Tasmania. While Cianfrance adopts the vocabulary of classic filmmaking, The Light Between Oceans sometimes feels like a pastiche of arthouse prestige period pieces. The film is bald-faced in its emotional manipulation and while the central conflict has the potential to be heart-rending, it’s handled more as a full-bore assault on audiences’ tear ducts than anything else.

With its acclaimed indie darling writer-director, leads who are either Oscar nominees or winners and a bestselling novel as its basis, The Light Between Oceans has a lot going for it. If one can overlook the heavy-handed cheesiness and leave their cynicism waiting outside the theatre, the film has its charms. Some viewers might find themselves pondering what decision they would make if they found themselves in the dilemma that plagues Tom and Isabel. However, others will be distracted by the contrivances in the narrative and the nigh-absurd coincidences required to keep the story moving.

Both Fassbender and Vikander are ideal leads for a period romance: he has the pulchritude of a male lead from Hollywood’s Golden Age, she is expressive and endearing, and they both have acting chops to spare. Despite their considerable skills and the chemistry the leads share, Tom and Isabel can’t help but feel more like ciphers than satisfyingly developed characters. The circumstances under which Tom and Isabel fall in love are awfully convenient. He’s the withdrawn, tormented soldier and she’s the beautiful, lively local lass who gives his existence meaning. It’s not plain sailing, and that’s when we get slightly more histrionics than are strictly required.

Since Weisz’s Hannah only shows up during the second half of the film, we’re conditioned to root for Tom and Isabel. Weisz’s performance allows us to see Hannah’s point of view as well, leading us to accept that there really aren’t any bad guys in the equation. The scene in which Lucy/Grace is separated from Isabel is difficult to watch, and parents will be able to relate to the anguish experienced by both Hannah and Isabel. The supporting cast consists of reliable Australian character actors, including Bryan Brown and Jack Thompson.

Adam Arkapaw’s sumptuous cinematography and Alexandre Desplat’s melancholic score might give The Light Between Oceans an air of class, but pare away the standard prestige pic bells and whistles and you’ll be left with soap opera hokum. Granted, it’s soap opera hokum that’s packaged and presented extremely well. This reviewer felt a little like Elaine from Seinfeld, who is confused and angry at how everyone around her seems to adore The English Patient, which she finds insufferably dull.

Summary: The Light Between Oceans features gorgeous scenery and gorgeous leads, but it’s hard to stay afloat in its sea of mawkish sentimentality.