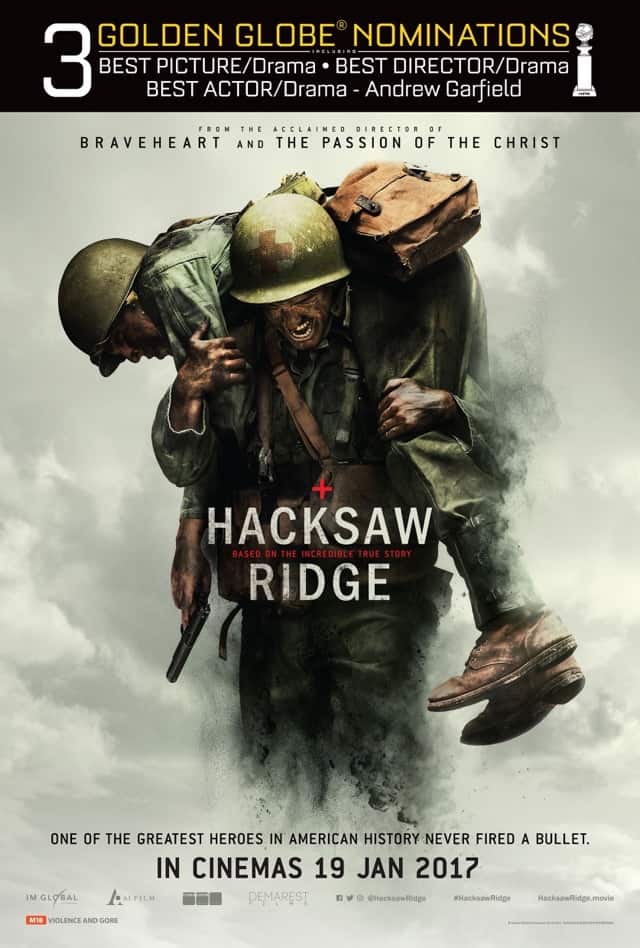 Stepping behind the camera for his first film as director in ten years, Mel Gibson tells the true story of war hero Desmond T. Doss (Garfield). Doss was born in Lynchburg, Virginia. Doss’ father Tom (Weaving), a traumatised World War I veteran, often lashes out at his wife Bertha (Griffiths). Doss’ brother Harold (Nathaniel Buzolic) enlists in the military to serve in World War II. Doss decides to enlist, but his strongly-held beliefs as a Seventh-day Adventist forbid him from taking a life, or even touching a weapon. Doss’ superiors Sergeant Howell (Vaughn) and Captain Glover (Worthington) try to get Doss discharged out of fear that Doss will be unable to contribute as a soldier. Doss persists, training as a medic, and his unit is eventually deployed to the Pacific theatre. In the Battle of Okinawa, Doss’ unit faces off against hordes of Japanese troops atop the cliff face of the Maeda Escarpment, nicknamed “Hacksaw Ridge”. Without firing a single bullet, Doss goes about rescuing his fellow men who are wounded on the battlefield, hoping to make it home to his wife Dorothy (Palmer).

For years, the real-life Desmond Doss, who passed away in 2006 at the age of 87, resisted the idea of a film being made about him. Doss feared that his religious beliefs would be misrepresented on the big screen, and was finally convinced in 2001. Hacksaw Ridge was stuck in development hell, as producers Bill Mechanic and David Permut tried for 14 years to get the film made. Mechanic sought Gibson to direct, and Gibson agreed after turning Hacksaw Ridge down twice. While Gibson has some ways to go if Hollywood at large is to forgive him for his inflammatory anti-Semitic outbursts, homophobic remarks and other erratic behaviour, Hacksaw Ridge is a big step along Gibson’s path to redemption. Permut, himself Jewish and gay, has publicly stated that Gibson is not the man that tabloid headlines make him out to be.

It’s a positive thing that Hacksaw Ridge finally got made and that Doss’ story will now reach a wider audience than it ever has. The real-life Doss is worlds away from the pre-conceived notion of a square-jawed action hero who charges into battle with guns blazing, and this underdog quality is quietly compelling. Garfield, as rangy and awkward as he is charming, imbues Doss with a folksy charm and an unwavering earnestness. Through its depiction of Doss’ Seventh-day Adventist beliefs and the opposition with which he was met, Hacksaw Ridge paints a vivid portrait of someone who stuck to his guns. Maybe that’s not the best way of putting it, but you get what we mean.

Hacksaw Ridge spends a little too long setting up Doss’ childhood and his training at Fort Jackson before his deployment. We understand the need for meaningful character development, but in between Doss’ courtship of Dorothy and his tumultuous relationship with his father, these earlier scenes feel embellished for dramatic effect. The character of Smitty (Bracey), Doss’ squad mate who accuses Doss of cowardice, is fictional. However, the journey Smitty undertakes to respect Doss’ beliefs and his heroism is moving all the same.

On a relatively modest budget of $40 million, Gibson pulls off explosive battle sequences which are effectively concussive and chaotic. The Japanese forces are depicted as ferocious, relentless and faceless – this is not a war movie which even remotely attempts to give the enemy a shred of empathy. The battlefield carnage is excessive – we see viscera strewn all over the place, limbs blasted off and rats picking at corpses of the fallen. Perhaps it’s a moot point to call out a war film for being “too violent”, but Gibson sometimes crosses the line from authentically grim to self-indulgently gory. It’s not as pronounced as in The Passion of the Christ, which was also a graphically violent faith-based film, but is in that vein.

Hacksaw Ridge is squarely Garfield’s to carry, but there are supporting performances of note here too. Vaughn plays very much against type as a harsh drill sergeant and is surprisingly believable in the part. Weaving’s portrayal of Doss’ father Tom is menacing but also sympathetic, with the audience understanding that it’s the trauma of war that has made Tom this way. Palmer brings a dose of old Hollywood glamour to the part of Dorothy, but as is often the case in war films, the character amounts to little more than “the wife waiting back home”.

The screenplay by Andrew Knight and Robert Schenkkan contains moments that border on being cheesy, including when Sgt. Howell announces “we’re not in Kansas anymore, Dorothy”. Perhaps it should be expected from a war movie about a pacifist, but Hacksaw Ridge’s message of standing by one’s principles seems a little at odds with how the camera lingers on grisly brutality. Even taking all this into account, Hacksaw Ridge manages to be rousing and emotional, a grand tribute to an unlikely hero.

Summary: Beneath the over-the-top carnage and war movie clichés lies a fascinating true story brought to life by a remarkable performance from Andrew Garfield.