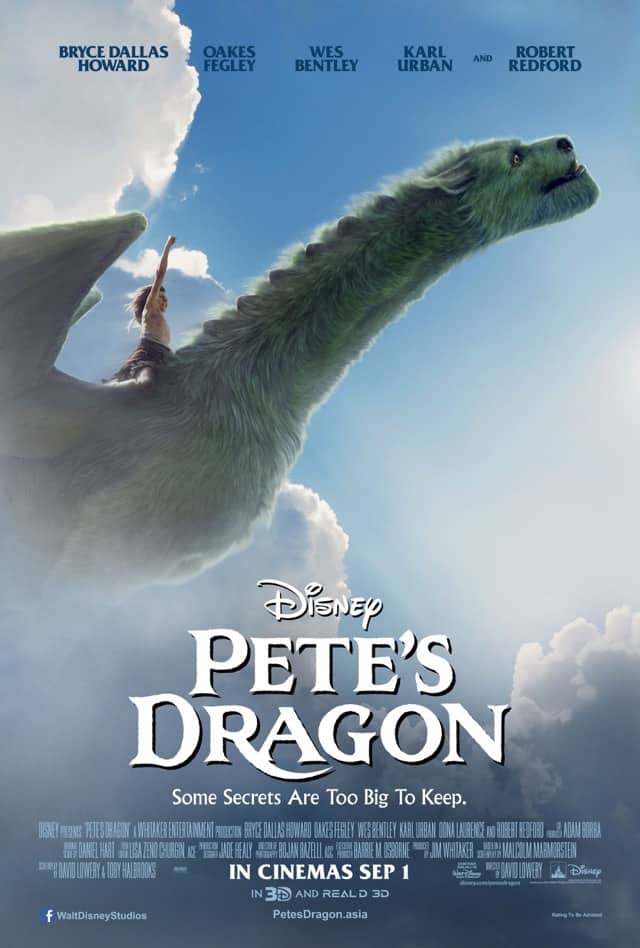 Call it “Re-Pete’s Dragon”: Disney has remade one of the lesser-known films in their canon, changing the setting from a seaside Maine town in the 1900s to the forests of the Pacific Northwest in the 1980s. Pete (Fegley), has spent six of his 11 years alive living in the forest after being stranded there following an accident. He has since befriended a green, furry dragon named Elliott (Kassir), who has the ability to turn invisible. Elderly wood-carver Meacham (Redford) claims to have encountered a dragon in the woods in his youth, but everyone writes it off as a tall tale. Meacham’s daughter Grace (Howard), a forest ranger, takes Pete in after Natalie (Laurence), the daughter of Grace’s boyfriend Jack (Bentley), spots Pete in the forest. In the meantime, Jack’s brother Gavin (Urban) becomes obsessed with capturing Elliott, thinking it will bring him fame. Pete must learn to live as a regular boy, but yearns to be reunited with his friend Elliott.

Pete’s Dragon is quite the wonder in that it contains nary a shred of cynicism. Director David Lowery strives to recapture the charm of old-school ‘A Boy and his X’ tales, and largely succeeds. Little of the original 1977 musical film remains: there’s a boy named Pete and a dragon named Elliott who can turn invisible, and the characters of Nora and her father Lampie are reworked into Grace and Meacham. Pete’s Dragon is what a remake should be: key components of the source are repurposed to fit a new vision and it isn’t a beat-for-beat re-tread of what came before. It’s warm-hearted but does take a while to get into gear, with a few moments bordering on cheesy. Pete’s Dragon stands on the shoulders of kids’ adventure films like E.T.: The Extra-Terrestrial and The Iron Giant, its old-fashioned sensibilities contrasted with the advanced visual effects technology used to bring Elliott to life.

Elliott is a supremely loveable creation, with some design cues taken from The Never-Ending Story’s Falkor the Luck Dragon. Lowery justified giving Elliott a furry coat by saying he wanted Elliott to be “the kind of dragon you really want to give a hug to”, and this reviewer did indeed very much want to hug Elliott. The visual effects work, supervised by Tony Baldridge and Eric Saindon, makes Elliott feel like a living, breathing creature. The moments in which Elliott interacts with his environment, knocking over trees, splashing about in the river or sliding into the grass after a rough landing, are uniformly convincing. Elliott possesses multiple doglike attributes, with his vaguely Chewbacca-like vocalisations provided by voice actor John Kassir. Every whimper and growl makes Elliott seem more like an actual animal, and the in-universe explanation of the dragon being regarded as a folk legend cryptid gives this flight of fancy some grounding.

The live-action actors expectedly play second fiddle to Elliott, but they all take this quite seriously. Fegley’s Pete is the second feral boy in a live-action Disney movie this year, after Neel Sethi’s Mowgli in The Jungle Book. Fegley brings a wildness and physicality to Pete, whose years in the forest have made him adept at climbing pretty much anything. His interactions with Elliott are the very stuff that warm fuzzy feelings are made of.

Between this and Jurassic World, it seems giant CGI creatures just won’t leave Howard alone. She doesn’t get much to do, but her performance does feel straight out of an 80s Amblin movie. Redford’s gravitas, warmth and that perpetual twinkle in his eye give the film plenty of heart. Meacham is an old-timer who never lost that sense of imagination. Laurence was one of the child actresses who originated the role of Matilda in the eponymous musical on Broadway, and glimmers of the precociousness integral to Matilda are present here. She gets to boss Redford around a little, and it’s a lot of fun to watch the living legend getting barked at by a kid. Bentley is passable if not terribly interesting as a blue-collar dad, while Urban sinks his teeth into the antagonist role even though it’s a little thinly written. He sneers the line “the dragon is mine!” with admirable conviction.

While it bears more than a few similarities to that recent Boy and His X favourite How to Train Your Dragon, Pete’s Dragon is charming in different ways too, thanks to its wholesome Americana vibe. Live-action kids’ adventure movies are a bit of a dying breed, but Disney’s recent live-action successes might mean a resurgence for the subgenre. As an avid indoorsman, this reviewer enjoys experiencing the wonders of nature from the comfort of a cinema hall. New Zealand doubles for the Pacific Northwest, and the actual scenery is as pleasing as the computer-generated visuals. Daniel Hart provides a rousing score, and ‘hip-hop violinist’ Lindsey Stirling makes her feature film debut performing ‘Something Wild’ with Andrew McMahon in the Wilderness. It all makes for a simple, wistfully-told story that harks back to simpler times and yet doesn’t drown in schmaltz.