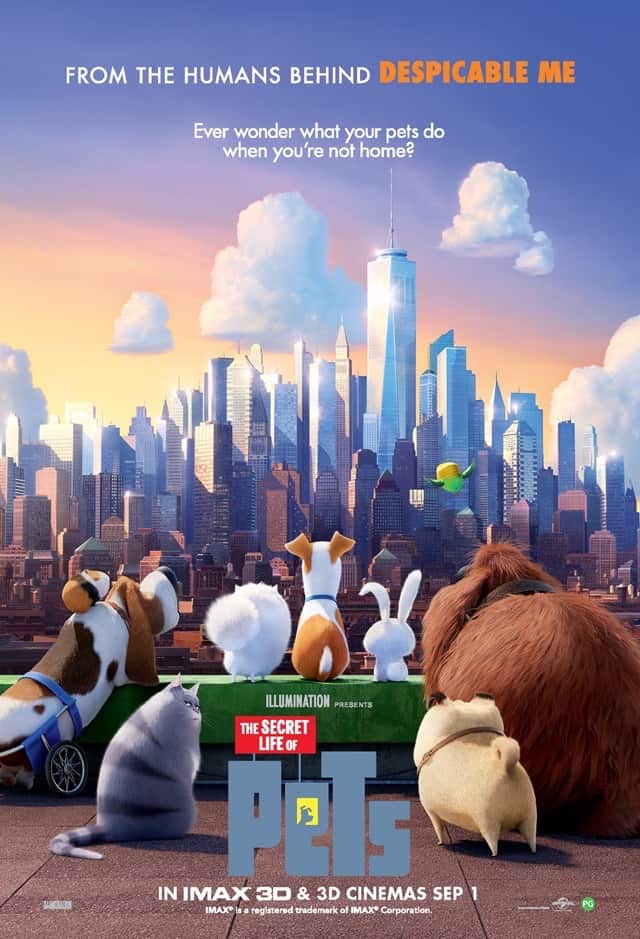 Double lives make for inherently intriguing storytelling: from the playboy/vigilante to the Wall Street stockbroker/serial killer to the electronics salesman/superspy, we can’t get enough of them. This animated film sheds light on what pets get up to when their owners head out to work. Naturally, it’s not quite as dramatic as the above examples.

Max (C.K.) is a Jack Russell terrier who is completely devoted to his owner Katie (Kemper). His idyllic existence is upended when Katie brings home a new dog, the shaggy mongrel Duke (Stonestreet). Upset that he is no longer the sole beneficiary of Katie’s affection, Max plots to get Duke kicked out of the house. The two get into an altercation and get lost, running into a gang known as the ‘Flushed Pets’. These unceremoniously abandoned animals are led by the psychotic rabbit Snowball (Hart), who has vowed vengeance against all humans. Gidget (Slate), a Pomeranian who has been nursing a crush on Max, leads a group of their friends to search for and rescue Max and Duke. The group includes aloof tabby cat Chloe (Bell), geriatric basset hound Pops (Carvey) and Tiberius (Brooks), a red-tailed hawk who has to keep his killer instincts in check. An odyssey through New York ensues, as Max and Duke have to put aside their differences and try to make it home.

The Secret Life of Pets is directed by Chris Renaud, who helmed the Despicable Me movies, and Yarrow Cheney, who was the production designer for them. Animation studio Illumination Entertainment is on a roll, with The Secret Life of Pets now a worldwide box office hit. The bits and pieces that have been cobbled together from other films are clearly evident and have been frequently pointed out: Max’s resentment of Duke echoes Woody’s jealousy when Buzz Lightyear enters Andy’s playroom in Toy Story and the story of stranded pets finding a way back to their owners is reminiscent of Homeward Bound.

While it isn’t exactly original, the film is energetic and vibrant and remains engaging throughout. The animation isn’t a dizzying sensory overload, and the design of New York City is just heightened enough while still being recognisable. Composer Alexandre Desplat channels George Gershwin with a breezy, jazzy score. Inventive moments of physical humour are showcased during several intricately choreographed set pieces, including a skirmish in which Max and Duke are bounced about between multiple clotheslines and when Buddy (Buresss), a dachshund, navigates a fire escape. While there are obvious jokes about bodily functions, The Secret Life of Pets does hit a few balls in the direction of the parents in the audience. “For me, every breath is a cliff-hanger,” the elderly Pops wheezes. Elsewhere, there’s a reference to the gentrification of Brooklyn. It’s the right shade of ‘adult’. A hallucination sequence in which Sausage Party seems to have invaded this film is more miss than hit, though. It’s not razor-sharp wit, but this reviewer laughed more often than not.

This film marks C.K.’s first voice role. Cynicism and wry, world-weary observation is very much built into C.K.’s persona as a comedian – as such, this reviewer was pleasantly surprised at how convincing he sounds as an earnest, enthusiastic Jack Russell terrier. The conflict between Max and Duke is efficiently established and predictably enough, they have a few bonding moments along the way, eventually reaching that inevitable “hey, you’re not so bad” point. Stonestreet is a good choice for the loveable big lug, who isn’t as dim-witted as one might expect. Yes, we’re guilty of judging books by their covers.

Speaking of going off appearances, a lot of the humour in The Secret Life of Pets is derived from first impressions being deceiving. There’s the refined poodle who head-bangs to System Of A Down’s Bounce, and of course there’s Snowball. Hart does a lot of manic yelling, and while it’s not a bad concept for the primary antagonist, the character’s drastic change of h(e)art towards the film’s conclusion is difficult to buy. As it stands, Snowball is not much more than a less esoteric Rabbit of Caerbannog from Monty Python and the Holy Grail.

Slate’s distinctive raspy tones sound very apt emanating from a Pomeranian, and the character’s determination to rescue her beloved Max is endearing. Brooks, voicing a very different animated character from Marlin in Finding Nemo and Finding Dory, gets some of the film’s funniest moments. Tiberius is a lonely hawk cooped up in a cage whose nature as a predator gets in the way of him making any friends, and it’s always fun to see a kids’ film with talking animals actually acknowledge the fact that animals eat other animals, while giving the carnivore in question some redeeming features. Bell’s cool indifference as Chloe the cat is an amusing counterpoint to the overall enthusiasm expressed by the various dogs.

We’ve avoided this comparison for this long, so here goes: The Secret Life of Pets can’t match the warmth and profundity of Pixar’s best works, but it’s still sufficiently moving and entertaining, with quality animation work making it a visual treat. Oops, we said ‘treat’ out loud. No, sit, sit!

Summary: Thanks to a funny, talented voice cast and eye-catching animation, The Secret Life of Pets is good fun in spite of its familiar aspects.