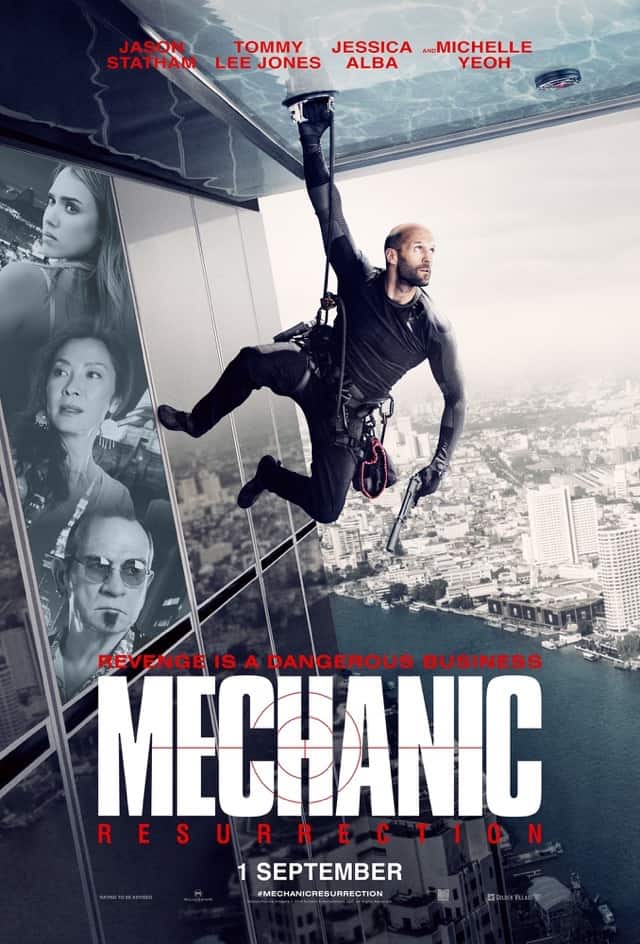 Brace yourselves for another Stath attack – everyone’s favourite bald, grimacing English tough guy with the limited acting range is back as Arthur Bishop. After surviving an attempt on his life by his would-be apprentice, Bishop has retired from being a hitman, or ‘mechanic’, and is lying low in Brazil. Riah Crain (Hazeldine), an arms dealer with a grudge on Bishop, kidnaps Bishop’s girlfriend Gina (Alba) and coerces him into completing three hits. Bishop’s three targets are African warlord Krill (Femi Elufowoju Jr.), who is holed up in a Malaysian prison that he rules from the inside, Australian mining magnate and sex trafficker Adrian Cook (Toby Eddington), and American arms dealer Max Adams (Jones). With the help of his old contact Mae (Yeoh), Bishop must pull off these nigh-impossible assassinations to ensure Gina’s survival, while also devising a way to get back at Crain.

Mechanic: Resurrection is the sequel to 2011’s The Mechanic, which was a remake of the 1972 film of the same name starring Charles Bronson. The contentious relationship between Bishop and Ben Foster’s Steve McKenna in the previous film lifted it slightly above the familiar trappings of the genre, but there’s nothing as interesting here. Mechanic: Resurrection pretty much meets all the expectations of your standard-issue Statham-led action flick. Its plot is entirely predictable and the action sequences aren’t staged with lots of panache, but Statham’s physicality means he’s always a convincing action hero.

There’s a decent amount of globe-trotting going on, with Bishop making stops in Brazil, Thailand, Malaysia, Australia and Bulgaria, taking advantage of the latter’s film production tax breaks. There’s some fun to be had in seeing Statham run through the streets of Georgetown in Penang, Malaysia or dangle from a skyscraper in Sydney. However, it’s painfully obvious that no actual filming was done in Brazil, with the opening sequence featuring distractingly phony green screen work. More than a few computer-generated explosions also look pretty embarrassing.

Statham’s virtually non-existent acting chops have never hindered his career, and he’s probably the closest thing we have to the action stars of the 80s and 90s with whom he palled around in the Expendables films. The former national diving squad member gets to reference his sporting past with a dramatic leap into the ocean, and there’s no shortage of our hero stabbing and shooting the bad guys.

Alba does a lot of frolicking on the beach in sundresses, and despite hints that her character might not merely be a damsel in distress, she spends the bulk of the film held captive by the villain. Gina is meant to be a combat veteran who opens up a shelter for sex trafficking victims in Cambodia, so one would think she’d be able to hold her own. While Gina does help Bishop track her down, she generally comes off as utterly helpless. In the previous film, it was established that Bishop is a ladies’ man who loves ‘em and leaves ‘em, but here, he forms a sentimental attachment to Gina with almost comical speed, and it’s difficult to buy that this woman whom he’s just met is someone he’d go to the ends of the earth for.

As the lead villain, Hazeldine is gruff but bland, lacking the wily smugness of a master manipulator who has Bishop wrapped around his little finger. Yeoh’s character doesn’t seem to serve too much of a purpose in the plot, and quite disappointingly, Yeoh doesn’t get to take part in a single action sequence. Jones’ appearance amounts to not much more than a cameo. He’s sporting a deliberately ridiculous look comprising red-tinted shades, a soul patch, earrings and a leather jacket, but he’s phoning it in rather than hamming it up for the most part.

Director Dennis Gansel delivers what is very much a production line action flick that’s barely a few notches above something that would be released straight-to-video, but which will meet the expectations of undemanding Jason Statham fans. The overarching plot is formulaic, the romance is trite and performers like Yeoh and Jones are woefully underused, but certain moments when Bishop plans and executes his elaborate assassination plots are interesting to watch. It’s barely satisfying junk food, but that’s what Statham does best.

Summary: Silly and generic but sufficiently entertaining, Mechanic: Resurrection is as predictable as clockwork.