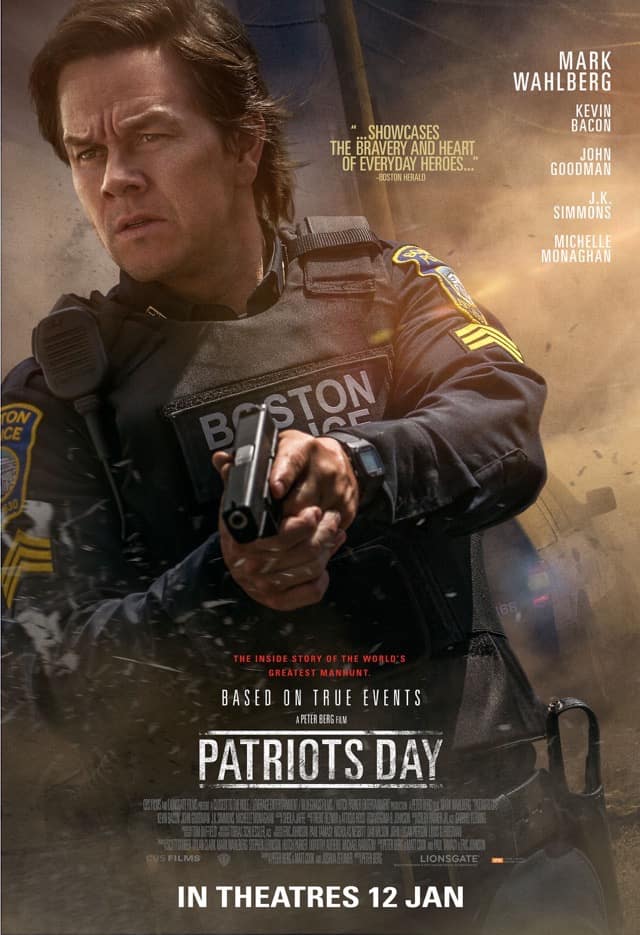 Following Lone Survivor and Deepwater Horizon, director Peter Berg and star Mark Wahlberg have re-teamed for a third film based on a recent tragedy. Patriots Day centres on the bombing of the Boston Marathon on April 15, 2013. Boston Police Department Sergeant Tommy Saunders (Wahlberg) is on duty at the finish line when the bombs go off. As the city is stricken by shock and grief, Saunders joins the effort to hunt down the perpetrators, brothers Dzhokhar (Wolff) and Tamerlan (Melikidze) Tsarnaev. Boston Police Commissioner Ed Davis (Goodman) and FBI Special Agent Rick DesLauriers (Bacon) coordinate the manhunt. Dzhokhar and Tamerlan steal a car from Dun Meng (Yang), the brothers eventually engaging in a fierce firefight with Watertown Police Sergeant Jeffrey Pugliese (Simmons) and his men in a quiet Watertown neighbourhood.

It’s a question that gets asked any time a film based on actual tragic events, particularly recent ones, is made: is this exploitative? There isn’t a clear answer to that question where a film like Patriots Day is concerned, since so many factors must be considered. Some who have lived through the Boston Marathon bombing have condemned the film as opportunistic and insensitive, while others have voluntarily taken part in its production in the hopes that the stories of the heroism and perseverance in the wake of the attack are told. Patriots Day concludes with tributes to the three civillians who were killed in the blast, in addition to interviews with survivors and law enforcement personnel. While it is respectful in that regard, one could argue that nobody really needs to see maimed victims lying in the streets, complete with close-ups on gory makeup effects.

One aspect of the story that’s noticeably omitted is the death of Sunil Tripathi, a student at Brown University who was misidentified as a suspect in the bombing and was hounded by online vigilantes. His death was ruled a suicide. While it’s likely that this is because there’s enough going on in the film as it is, it can be interpreted as a reluctance to confront challenging issues like racial profiling.

Patriots Day works best as a procedural, detailing the detective work that went into tracking down those responsible for the terrorist attack. In a warehouse, crime scene analysts reconstruct a mock-up of Boylston Street, where the bombs went off, determining which security cameras might have caught a glimpse of Dzhokhar and Tamerlan. The firefight between the brothers and Watertown police is an intense, impactful action sequence that is visceral and unnerving. Berg avoids the gloss of blockbuster action thrillers while keeping things tense and propulsive. When Patriots Day goes the docu-drama route, it feels like a big-budget version of the re-enactments one would see in a National Geographic program. The score by Trent Reznor and Atticus Ross is not one of their most remarkable, but the droning electronica does an adequate job of signalling impending dread.

The character of Tommy Saunders is a fictional one, a composite of Boston police officers who functions to string the events in a linear fashion. He’s there when the bombs go off, he’s there at the gas station after the Tsarnaev brothers escape, he’s there at the firefight, and he’s there when Dzhokhar is captured after hiding in a boat. Unfortunately, it couldn’t be more obvious that Saunders is a plot device, albeit one that’s justified. Wahlberg makes a valiant effort, but comes up short, especially when he’s sharing the screen with actors like Bacon, Goodman and Simmons. When Saunders objects to the way DesLauriers is running things, it comes off as petulant rather than impassioned. For most of the film, Wahlberg wears this expression which is someone between a look of surprise, and the face you make seconds before you sneeze.

As with most procedurals, it is the characters’ function more than who they are which matters, which is just an exigency of films of this type. While the afore-mentioned trio of Bacon, Goodman and Simmons (a show about the three of them heading up a law firm would be insanely entertaining) don’t get to show the range they’re capable of, they’re all convincing and steadfast.

Both Wolff and Melikdze refrain from going over the top as the Tsarnaev brothers, with Wolff being the right shade of annoying in the moments when Dzhokhar displays expected teenager traits. As Tamerlan’s wife Katharine, Melissa Benoist, TV’s Supergirl, displays her dramatic chops in an intense interrogation scene opposite Khandi Alexander. Alas, the female characters in general get overlooked, with Michelle Monaghan having close to nothing to do as Saunders’ wife. The closest Patriots Day gets to outright sentimentality are the scenes with newlyweds Patrick Downes (O’Shea) and Jessica Kensky (Brosnahan). Their story is as romantic as it is inspiring and moving, but the attempts at ‘aww shucks’ couples banter border on grating.

For this reviewer, it was Jimmy O. Yang’s turn as Dun Meng that was the revelation. O. Yang is known to fans of Silicon Valley as Jian Yang, in which he displays impressive comedic chops. In Patriots Day, the scenes in which the Chinese app-developer is at the mercy of the Tsarnaev brothers turn out to the most harrowing and suspenseful in the film.

Patriots Day is riveting, compelling and moving, but it’s difficult to shake the notion that even if it wasn’t made for the sole purpose of profiting off tragedy, it’s still profiting off tragedy. Then again, any studio film is made primarily to turn a profit, so at the risk of sliding down a slippery slope, we’ll end our review here.

Summary: Patriots Day is solidly constructed and resonant, but making its main hero a fictional character for expedience of storytelling is just one of several ways in which it is possibly distasteful.