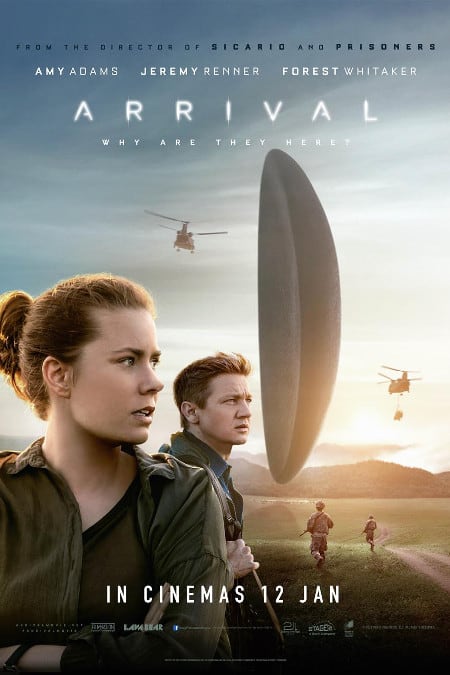 It’s Close Encounters of the Learned Kind: aliens are greeted not with a barrage of laser fire, but by academics seeking to understand their motive for travelling to Earth. When 12 extra-terrestrial spacecraft appear hovering above Earth, US Army Colonel GT Weber (Whitaker) ropes in linguist Dr. Louise Banks (Adams) and theoretical physicist Dr. Ian Donnelly (Renner) to head a team that will attempt communicating with the aliens. The arrival of the 12 ships throws society into disarray, with other countries’ handling of the situation posing the threat of all-out war. Louise and Ian enter the ship, making contact with the aliens, which come to be known as ‘heptapods’. Louise studies the heptapods’ language, a series of complex circular shapes, gradually figuring out how to speak to them. In the meantime, tensions escalate worldwide, with many Americans calling for a show of force against the heptapods after the aliens convey that their purpose on Earth is to “offer weapon”.

Arrival is based on Story of Your Life by Ted Chiang, a Nebula Award-winning novella. Director Denis Villeneuve, currently working on the Blade Runner sequel, had wanted to make a science fiction film for some time. Meanwhile, screenwriter Eric Heisserer had been unsuccessfully pitching an adaptation of Story of Your Life and was about to give up on it. Producers Dan Cohen and Dan Levine eventually united Villeneuve and Heisserer, with the result being a towering achievement in the genre. Villeneuve’s approach of measured stillness gives this first contact story considerable gravitas, while keeping it intimate and personal in that the events are largely seen from one character’s point of view. Aficionados of the genre will recognise certain elements in Arrival, but the way they’re assembled and presented is unlike any sci-fi film before it.

Villeneuve refrains from flashy stylistic flourishes, with the aliens and their ships deliberately under-designed. Much of the atmosphere comes courtesy of Jóhann Jóhannsson’s score. Its ominous electronic tones are contrasted with the stirring strings of Max Richter’s On the Nature of Daylight, which opens and closes the film.

Arrival’s premise is built on the Sapir-Whorf hypothesis, the concept in linguistics that one’s worldview is intrinsically shaped by the structure of one’s language. While Arrival does require its audience to be engaged in the story, it doesn’t drop one off in the deep end to drown in dense techno-babble. Several sci-fi/fantasy TV shows and movies have boasted entirely invented alien languages, but this has generally been done as a world-building move to give the fictional civilisations more texture. In Arrival, the heptapods’ language is the backbone of the story rather than a detail, with the structure of the language demonstrating the heptapods’ transcendent perception of time. By the time we get to the mind-bending conclusion, we were fully invested in the plot. As trippy as the ending is, it does not break any of the earlier-established rules.

Villenueve’s films can generally be described as “cold”, but Adams’ performance anchors Arrival with warmth and humanity. Adams’ ability to convey a rich range of emotions while remaining understated is an invaluable asset here. We are presented with a back-story for Louise that seems emotionally manipulative, but Adams’ performance gives the character great depth, and we are later provided context for said back-story. Louise is analytical, but not condescending in the way academics in movies often can be. She is shaken by her initial encounter with the aliens, as anyone would be, but she forges ahead to make sense of the information she’s been given.

Renner’s Ian serves as a foil to Adams’ Louise, with Renner bringing just enough roguish charm to the part. Ian takes a back seat to Louise for most of the film, but in the middle of stressful circumstances, they find solace in each other. In Ian’s introductory scene, he disagrees with Louise that language is the foundation of any culture, contending that science is instead. Louise and Ian’s relationship is symbolic of how the ‘soft’ and ‘hard’ sciences intersect. By working together towards a common goal, Louise and Ian overcome the obstacles in their path instead of getting in each other’s way, making the duo one that is easy to root for.

Whitaker plays the military man whose every action is governed by orders from on high, and who baulks at some of the unorthodox methods employed by Louise and Ian but is ultimately supportive of their efforts. The film lacks nuance in its portrayal of how other countries are reacting to the alien ships stationed in their backyards. Louise and Ian are spearheading the American effort to establish contact with the heptapods and as expected, Russia and China are seen being the most aggressive. Still, “lacking nuance” is relative, since most the film is complex and sensitively realised. It is disheartening to think that the current U.S. President-Elect would likely nuke the heptapods into oblivion as a knee-jerk reaction instead of sending a linguist and a physicist to deduce the aliens’ raison d’être.

While Will Smith welcoming an extra-terrestrial marauder to Earth with a swift punch to the face might be the pop culture conception of first contact with aliens, sci-fi abounds with more contemplative approaches to this hypothetical situation. As Arrival draws to a close, it becomes clear that this film deserves a place in the sci-fi pantheon alongside the very best examples of the genre.

Summary: As intelligent and thought-provoking as it is moving and profound, Arrival’s approach to the scenario of mankind’s first contact with beings not of this Earth is powerful and sublime.