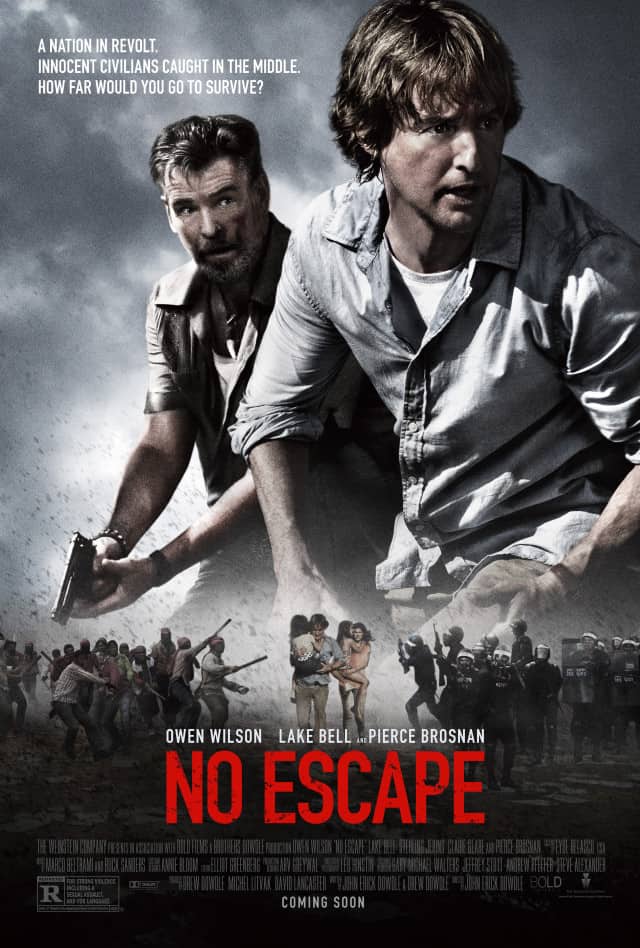 A government will be overthrown. Chaos will reign. Kids will be flung across rooftops. In this action thriller, Owen Wilson plays Jack Dwyer, a water treatment engineer from Austin, Texas. Together with his wife Annie (Bell) and young daughters Lucy (Jerins) and Beeze (Geare), Jack travels to Southeast Asia, where they will live as expatriates. On the flight there, they meet Hammond (Brosnan), a friendly but enigmatic man who might know more than he’s letting on. As a violent coup breaks out and their hotel is under siege, the American family is caught in the thick of the bloodbath and it will take every ounce of determination, every stroke of luck and all the help they can get if they want to make it out alive. 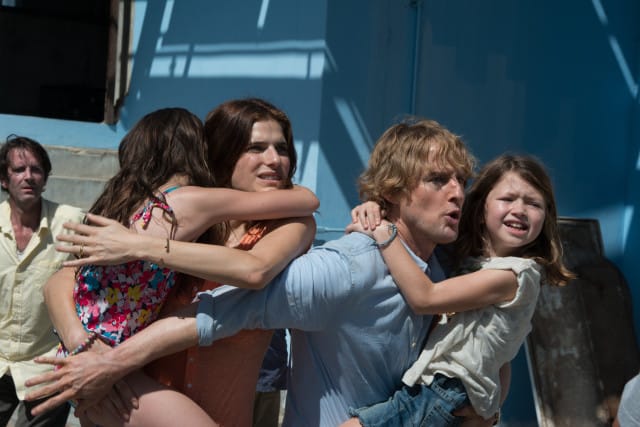 No Escape is directed by John Erick Dowdle, who co-wrote the screenplay with his brother Drew. The Dowdle brothers are primarily known for found-footage horror films, including The Poughkeepsie Tapes, Quarantine and last year’s As Above, So Below. While this is a departure for them in that it’s a straight-ahead thriller, there’s still a very terrifying element to the story, which plays on the fears many of us have of being caught in a dangerous situation in an unfamiliar locale. The nation in which the story is set is never referred to by name and the characters nebulously say “Asia” pretty often. It’s intended to be ambiguous, with Thai-like script and Thai-sounding dialogue, plus the Vietnamese border being across a strait. To avoid offending any sensibilities, great pains are taken to not explicitly refer to the ostensibly fictional country by name, which reminded this reviewer of those seasons of 24 where the terrorists are from “the Middle East” and nowhere more specific than that. We’ll refer to the country as “Not!Thailand”.

While this tiptoeing does take one out of the movie a little, this is actually a largely effective thriller. Straightforward and nothing ground-breaking, but effective. Dowdle manages to create an authentic and frightening sense of chaos with uncompromisingly brutal violence and this reviewer found himself sucked into the plight of the family at the centre of the story. Of course, it’s not supposed to matter so much if everyone else dies, as long as our protagonist, his wife and daughters makes it out alive, but that’s an exigency of films of this type. The film was shot on location in Chiang Mai and other regions of Thailand, which does an excellent job of doubling as Not!Thailand. In the first scene in which Jack realises something has gone terribly wrong, he is stuck in the middle of a clash between the riot police and rebels, and it is appropriately disorienting and scary. The film mostly relies on the atmosphere of the location to do the work, but while the action set pieces are not spectacular, they get the job done.

There are several traps that are very easy to fall into with “family tries to survive ordeal”-type films. One is convenient ways out where it seems like a guardian angel is working overtime – there are a few such moments here, but it doesn’t neutralise the overall feeling of danger. The other is putting kids in jeopardy as a way to manipulate the audience into feeling something. Lucy and Beeze are caught in some pretty hairy predicaments, but it really helps that the way Sterling Jerins and Claire Geare play them and in the way they’re written, these feel like regular kids and not “movie kids”. Then there’s the predictability of the “get trapped, just barely escape and get trapped again” structure, but things move along quickly enough so that the tension doesn’t fizzle out.

Owen Wilson isn’t an actor you’d expect to be headlining an action thriller, and he hasn’t done a role of the type since 2001’s Behind Enemy Lines. He’s actually excellent in this, mostly because he’s convincing as an everyman way out of his element. If it were a Tom Cruise (as in War of the Worlds) or a Brad Pitt (as in World War Z) instead, it wouldn’t have as much impact when the character has to draw on everything he has and become a badass to protect his family, because it’s something that would come easier for a Tom Cruise or a Brad Pitt than for an Owen Wilson. 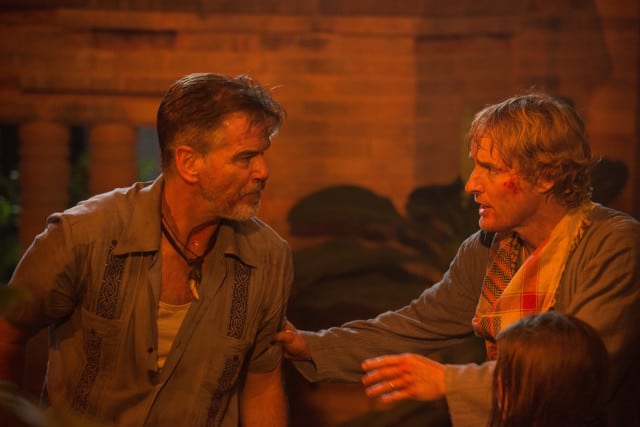 Lake Bell, replacing the initially-cast Michelle Monaghan, is also believable as a mother who has to be strong for her children in spite of being terrified herself. Annie gets to pull off some impressive physical feats while trying to evade the rebels and Bell, Wilson, Jerins and Geare are quite easy to buy as a family unit. The scenes in which the parents try to comfort and reassure their kids are well-written, which helps to balance out the slightly more outlandish moments in the story. Pierce Brosnan as the helpful, secretly badass stranger is excellent casting. He even gets to tip his hat to the Bond role and when he explains what’s going on, as he eventually must, it doesn’t sound like tedious exposition. Thai actor Sahajak Boonthanakit adds some texture and much-needed levity to the proceedings as the requisite “friendly local”, a driver with an amusing Kenny Rogers obsession.

No Escape often looks like it was shot for TV, but what it lacks in polish, it makes up for in harrowing, mostly credible scenarios that will have audiences asking themselves “what would I do in a situation like this?” With Owen Wilson doing a really good job as the “everyday hero” dad, a palpable sense of danger present throughout and clever use of the already-existing environments and locations, No Escape is adequately riveting.

Summary: It doesn’t break the mould, but No Escape is a solid thriller with some edge-of-your-seats moments and a central family that’s easy to root for.