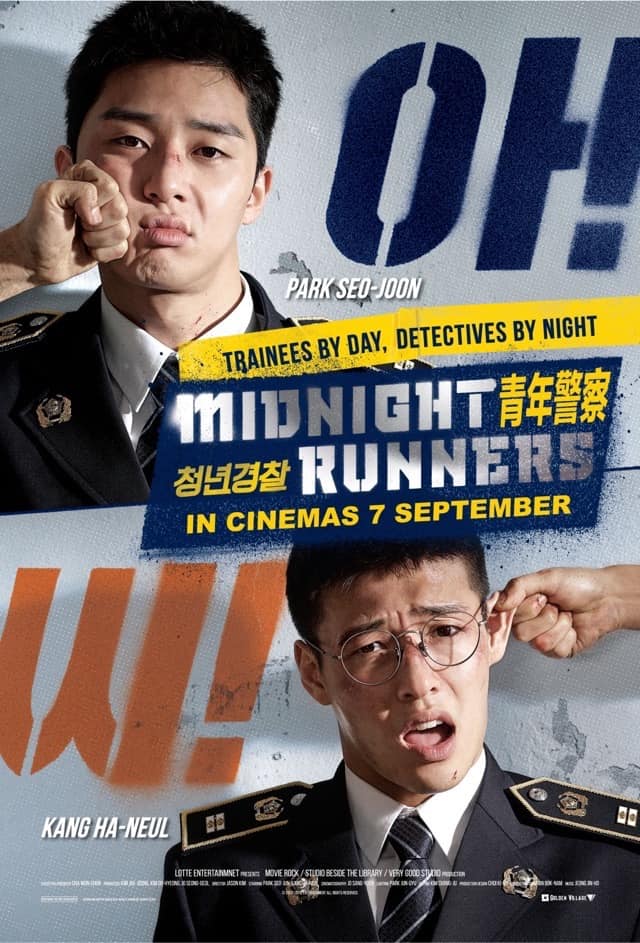 Without a doubt, Midnight Runners is an enjoyable action-comedy film about the bromance between two police cadets and how being selfless can make a huge difference. Despite being an action-comedy, Midnight Runners touches on a couple of dark themes – the rigid bureaucratic system of the Korean law enforcement and the Korean black market run by Chinese immigrant gangs – the main draws of the film are the intelligently-planted gags and well-executed action sequences. Jason Kim Joo-Hwan’s brilliant directing and writing also maintained the focus on the interesting lead characters – played by Park Seo-Joon and Kang Ha-Neul.

Our two leads are misplaced police cadets; they didn’t join because of passion or dream to be a policeman. Gi-Joon (Park) is a poor young lad raised by a single mother, and he thinks the police force can provide him with a stable income to support his mother. Hee-Yeol (Kang) is a slightly awkward bookworm who thinks a traditional university education is too ordinary, so he just wanted to try something unconventional. They are not model students by any means and are cynical of the usefulness of the lectures and training in the police academy. But they soon face obstacles within and outside the law, while experiencing first-hand the importance of the skills they honed.

Like your typical Joes on the streets, our heroes get jealous over a fellow cadet’s pretty hook-up from the club, leading them to meet K-Pop idol group 2PM’s Chan-Sung while searching for a partner of their own. It’s their first time trying to flirt with random girls, and they fail terribly but not without tickling audiences with their hilarious fumbles. The real action begins when they witness a kidnapping in a deserted alley after midnight. What follows are even more elaborate character development and action sequences that make viewers wholly invested.

Deserving honourable mentions too for their amazing acting are seasoned performers Park Ha-Seon and Seong Dong-Il, who play the instructors of the two police cadets. Although they are given limited screen time, Kim’s near flawless directing and writing maintains their characters’ significance to the film and its narrative.

The camera work and pacing of the action scenes are on point. As much as Kim isn’t a veteran in film making, he demonstrates a great understanding of the need for breaks between action sequences. He uses brief silences, short gags, transition shots and swift cuts to ensure viewers are entertained and on the edge of their seats but not gasping for air, a mistake some incredibly fast-paced films make.

That said, the action can’t be compared to high budget action films but is as good as it can get. Undoubtedly, the fighting shots could’ve been more elaborate, but Kim’s intention was to make it as believable as possible. If the fighting choreography was too elegant, it might come off as scripted and unnatural. Nevertheless, the practical and special effects are realistic and believable enough to make the audience cringe and moan in empathy as our characters – hero or villain – suffer blows and over-shoulder slams to the floor.

Above all, Midnight Runners delivers more than what it promises. It isn’t just another action-comedy where the audience wouldn’t care about anything other than the fighting sequences and hilarious dialogues and interactions. The film’s plot also alludes to an important message for viewers: be passionate, tenacious and sincere in everything you do just as our lead and supporting characters are in saving lives and upholding justice. An act of selflessness can make a huge difference in a society where the majority only care about themselves.

Summary: Unlike your typical action and comedy films, Midnight Runners isn’t just all fighting and gags – it hinges on well-crafted characters to tell a meaningful story that viewers will care about.