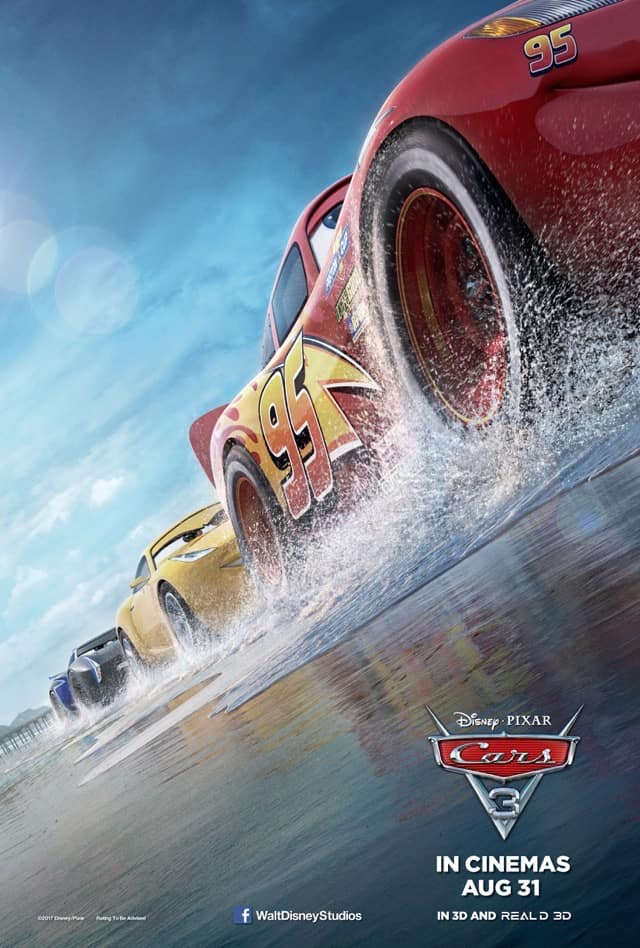 Lightning McQueen (Wilson) was once the fastest car alive, but his days at the top of the heap are numbered. In the third instalment of Pixar’s Cars series, Lightning’s status as a seven-time Piston Cup champ is threatened by newcomer Jackson Storm (Hammer), a high-tech, hothead next generation racer. Lightning’s Rust-eze team has been sold by owners Rusty (Ray Magliozzi) and Dusty (Tom Magliozzi) to the wealthy Sterling (Fillion), who has constructed a state-of-the-art training facility. Sterling assigns trainer Cruz Ramirez (Alonso) to Lightning, who resents the implication that he is old and on the brink of retirement. While initially dismissive of Cruz, the two eventually bond as they go in search of Smokey (Cooper), the former mechanic and crew chief of Lightning’s late mentor Doc Hudson (Paul Newman). With his girlfriend Sally (Hunt) and his friends Mater (Larry the Cable Guy), Luigi (Tony Shalhoub), Guido (Guido Quaroni) and Mack (Ratzenberger) in his corner, Lightning gathers the courage to regain the title and beat Jackson.

The Cars series is not viewed as one of Pixar’s crowning achievements, with 2011’s Cars 2 often viewed as the studio’s worst film. Cars 3 is a definite improvement on the second entry, often sincere and never aggressively obnoxious. However, it’s still difficult to get swept up in the story: the basic plot structure of an aging champion threatened by a rookie competitor brings films like Rocky Balboa to mind. It’s no surprise that co-writer Mike Rich is primarily known for penning sports films, including The Rookie, Miracle and Secretariat.

Lightning’s arc in this film isn’t exactly the easiest for kids to readily relate to. The themes of re-evaluating one’s purpose after getting a wake-up call in the form of a younger, faster rival might not resonate as well with the film’s young target audience as Pixar hopes. There’s also a great deal of sentimentality, with the impact that Doc Hudson had on Lightning, and Lightning’s search for inspiration in his late mentor’s wisdom being a crucial plot point. The adults might get a touch misty-eyed, but this might be lost on most kids.

As expected from Pixar, the animation is top-notch. The Cars are easy to buy as actual characters, and the way the characters shift their weight from one wheel to another is amusingly expressive. We get some gorgeously-rendered backgrounds and realistic atmospheric effects such as sparks and dust. However, Cars 3 lacks memorable set pieces. A Demolition Derby sequence is the most exciting the film gets, and even that falls a good distance short of the creatively conceived set pieces in other Pixar films. The bulk of the movie is spent chronicling Lightning’s training, which is good for character development, but isn’t all that exciting.

Wilson’s easy-going charm makes Lightning likeable even when the character gets caught up on his own success. The biggest thing Cars 3 gets right is the new character Cruz Ramirez. Alonso lends the character an upbeat eagerness and she’s set up to be annoying because she’s standing in Lightning’s way, but the character’s motivations are gradually revealed and the relationship between her and Lightning evolves organically. The dynamic between the two characters is sufficiently different from what we usually see in animated films, and to make another comparison to a boxing movie, is a little Million Dollar Baby-esque.

Thankfully, Mater takes a back seat in this one – arguably the biggest mistake the second film made was elevating him to a leading role. Fillion’s performance as billionaire Sterling is coolly sophisticated and just the right amount of condescending. Unused recordings of Newman from the first film are used for the flashbacks featuring Doc, displaying significance reverence for the legendary actor. Orange is the New Black’s Lea DeLaria has plenty of fun as the sadistic monster schoolbus Miss Fritter. As in the previous instalments, real-life racing drivers and sports commentators making vocal cameos: listen out for Lewis Hamilton, Bob Costas, Darrell Waltrip, Junior Johnson, Daniel Suárez and others.

While Cars 3 has its heart (or engine, as it were) in the right place, it’s far from impressive enough to justify its own existence. It surpasses the low expectations generated by its disappointing sequel and showcases surprising depth, but instead of sending heart rates racing, Cars 3 mostly coasts along.

As is customary for Pixar films, Cars 3 is preceded by an animated short. This one is Lou, directed by Dave Mullins, and about a loveable creature who lives in the lost and found box at an elementary school playground. Built on a charming, simple premise and packing a whole lot of emotion into its six minutes, Lou is a fine example of the storytelling power can summon.

Summary: Despite a story that most kids might find challenging to connect to and a dearth of memorable set pieces, there’s enough amiable sweetness to Cars 3, making it a marked improvement on its immediate predecessor.