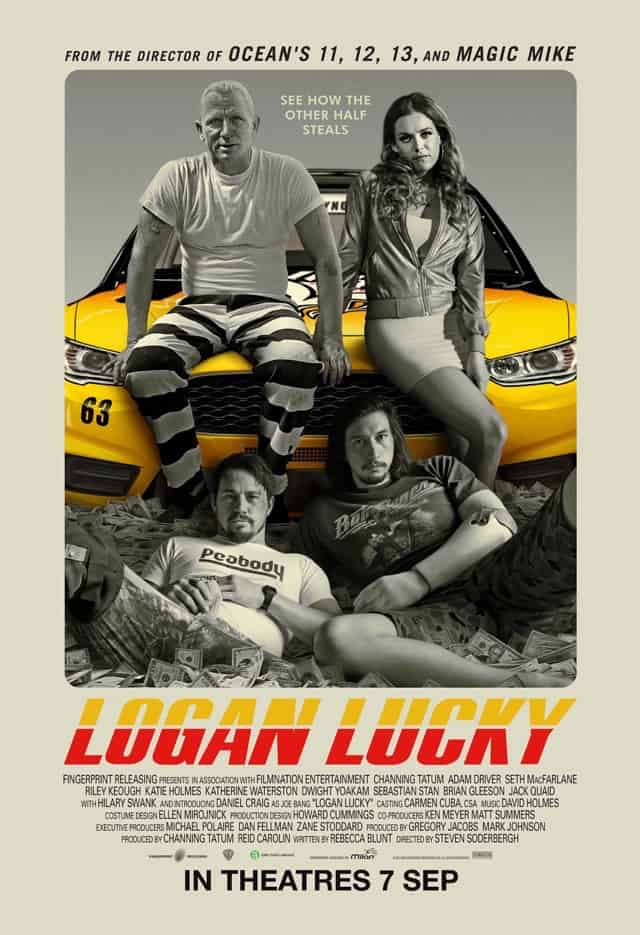 Despite announcing his retirement after 2013’s Behind the Candelabra, Steven Soderbergh is back in the director’s chair and off to the races with this caper comedy. The Logan family hasn’t had the best of luck: Jimmy Logan (Tatum) has just been fired, and his brother Clyde (Driver) lost his left arm while on military duty in Iraq. Jimmy loves his young daughter Sadie (Mackenzie), but Jimmy’s ex-wife Bobbie Jo (Holmes) plans on moving away with her wealthy new husband Moody (Denman), making it harder for Jimmy to see Sadie. While working his construction job at the Charlotte Motor Speedway, Jimmy hatches a plan: rob the vault containing money from the concession stands during the Coca Cola 600 race, one of the largest annual Nascar events. To pull off the heist, the Logan siblings tap on the skills of demolition expert Joe Bang (Craig) – but they’ll need to break him out of prison first. With limited resources and simple ingenuity, the crew must overcome a host of obstacles to make off with the money.

Logan Lucky has been referred to as ‘Redneck Ocean’s Eleven’, which is a fairly accurate description. There isn’t a hint of glitz or glamour to be found, and the protagonists are blue-collar guys from the South who love John Denver. While the expected stereotypes are trucked out and some fun is had at the expense of the characters and their cultural backgrounds, they’re imbued with humanity and are, for the most part, well-rounded creations. Screenwriter Rebecca Blunt crafts a script that’s not only funny, but is also admirably elaborate when it comes to the mechanics of the heist. There are so many moving parts, and it’s easy to be fooled by the laid-back vibe of the film because there’s a precision to the many hoops our heroes must jump through to pull off the heist.

Part of what makes Logan Lucky feel fresh is its status as a ‘big small’ movie. Soderbergh deliberately circumvented the studio system, formed his own distribution company named ‘Fingerprint Releasing’ and teamed with distributor Bleecker Street, making this technically an indie film. There are big-name stars in the cast, and Soderbergh himself is a well-known director, but like its protagonists, there is a scrappy underdog feel to Logan Lucky. Soderbergh has personally devised a marketing strategy that goes against conventional wisdom, targeting the film’s advertising instead of unleashing the expensive publicity blitz most studio films get. While ostensibly born out of Soderbergh’s disillusionment with the big Hollywood machine, there’s nary a hint of bitterness in Logan Lucky, which is exuberant even as it touches on the very real struggles of America’s working class.

This is Tatum’s fourth collaboration with Soderbergh, after Haywire, Magic Mike and Side Effects. The Jimmy Logan character taps into all of Tatum’s strengths as a performer, and the ‘lunkhead with a heart of gold’ archetype falls right within his skill set. While Tatum has showed off his comedic chops in other films, he’s largely restrained, and there are even moments when his performance is genuinely moving.

Driver plays well off Tatum, bringing a quiet earnestness to the role of Clyde. Keough is well on her way to A-list leading lady status, playing the plucky Mellie with entertaining confidence. The scenes in which Mellie bonds with her niece Sadie, styling Sadie’s hair before a beauty pageant, are quite sweet. Child beauty pageants aren’t depicted in the film as being exploitative the way they often are in real life, with Sadie taking great pride in her performance. Sadie’s talent showcase is the film’s most unabashedly sentimental scene, and thanks to child actress Farrah Mackenzie, it works.

Craig performs a heist of his own, single-handedly stealing the movie. This is a piece of stunt-casting that pays dividends: sporting a bleached blonde buzz cut, tattoos and affecting a southern accent, this is Craig like we haven’t quite seen him before. As with any good heist crew, there must be eccentric characters, with Joe Bang being the most eccentric of the bunch. Tatum, Driver and Craig develop an unlikely and amusing triple act, the result being silly while not so over-the-top as to lose audiences. Hearing Craig say lines like “I’m about to get nekkid” in a ridiculous drawl is the height of entertainment.

Not all of it works: as is often the case with ensemble comedies, there are a few too many characters and subplots at work. Seth MacFarlane’s turn as egotistical moustachioed Nascar driver Max Chilblain doesn’t land as naturally as the other performances, calling too much attention to itself and feeling awkward and forced in the process. Sebastian Stan, playing Dayton White, a driver on Chilblain’s team, gets very little screen time. So too does Katherine Waterston, who pops up for only a couple of scenes. Hilary Swank appears late in the movie as an FBI agent investigating the heist, and like MacFarlane, she goes a little too broad, registering as off-key.

Funny, packed with quirky down-home charm and containing an impressively-engineered central heist, Logan Lucky is bona fide sleeper hit material, and is enough to make one hope Soderbergh keeps making movies for a while longer yet.