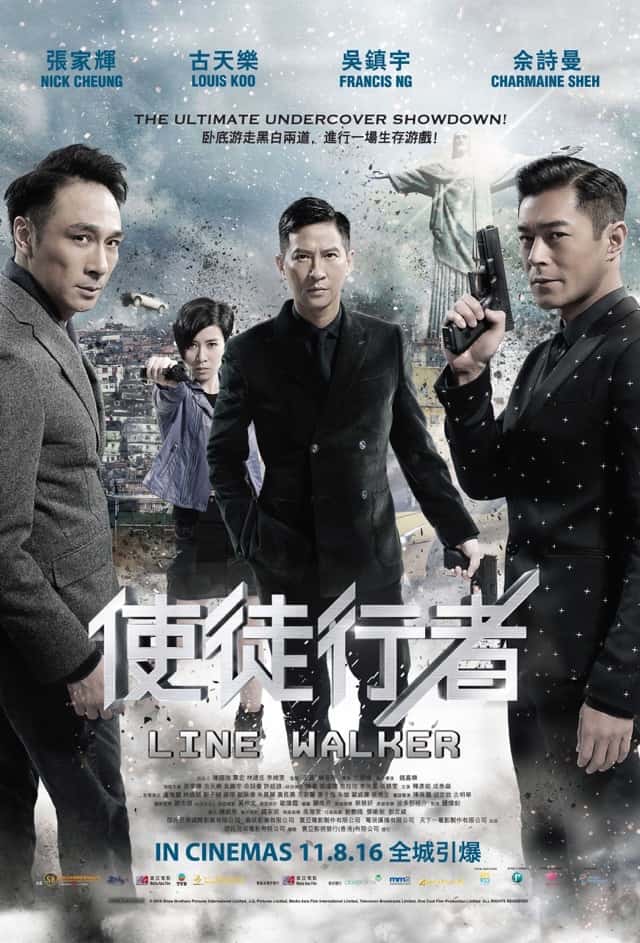 “I keep my eyes wide open all the time” – so sang Johnny Cash in I Walk the Line. In this crime thriller, undercover cops embedded deep within organised crime networks have to watch their backs, lest said backs get stabbed. Undercover agent Ding Jie (Sheh) receives an encrypted text message from a mysterious figure known only as ‘Blackjack’, who claims to be an undercover agent who is out in the cold after the death of his handler. Ding’s superior at the Criminal Intelligence Bureau (CIB), Q (Ng), launches a search for Blackjack. Q discovers that a financial firm is involved in a drug deal in Brazil, narrowing down the true identity of Blackjack to the firm’s advisor Lam (Cheung) or his right-hand man Shiu (Koo). Both are working with Foon-hei (Hui), a triad boss previously thought dead. When the triads catch wind of a possible mole in the ranks, suspicion and betrayal threaten to throw the crucial drug deal into chaos.

Line Walker is a continuation of the hit TVB action drama series of the same name. Of the show’s main cast, only Sheh and Hui return, with Raymond Lam notably absent. Lam, who played Bao Seed in the series, reportedly turned down an offer to star in the movie, much to the disappointment of fans. Ideally, a big screen spin-off of a TV show should stand well enough on its own while tossing out tidbits and Easter Eggs for loyal fans. Unfortunately, Line Walker starts out confusing and only ties itself in increasingly complicated knots. The double crosses and red herrings are stacked in a wobbly pile, such that by the time the conclusion rolls around, the story resembles a wobbly Jenga tower. Yes, it’s perfectly reasonable to expect a few twists and turns in a crime thriller, but the number of times Line Walker announces “but wait, there’s more!” is nigh absurd, and more tiresome than actually dramatic.

One can tell that considerable resources have been sunk into Line Walker, and it’s quite the lavish production: in addition to shooting in Hong Kong, parts of the movie were filmed at Macau’s new Studio City resort and in Rio de Janeiro, Brazil. The action sequences, choreographed by Chin Ka-lok, are brutal and relatively elaborate, with quite a bit of blood being drawn during the fights. It’s a shame that these flourishes come off as bells and whistles instead of actually enriching the story.

Line Walker also suffers from serious tonal issues: Sheh’s first scene, in which she’s astride a motorcycle being pursued by bad guys also on bikes, is packed with slapstick. Later, while exiting a car in an evening gown, her dress gets caught in the door. Elsewhere in the movie, there are overwrought confrontations and tearful dying confessions. A villain even slits another character’s throat, and gouges out someone else’s eyes. Thankfully, we’re spared from seeing that grisliness in all their graphic detail, but the effect is still pretty jarring.

Sheh may have gained a great amount of popularity from her role as Ding Jie in the Line Walker series, but all of the pouty, whiny cutesiness she exhibits feels patently out of place in what’s supposed to be an intense, explosive thriller. Cheung and Koo play off each other well enough, but both performers seem like they’re trying to out-cool the other, to the point where all their posturing being pretty silly. A major revelation with regards to Hui’s character was delivered in the show’s final episode – in which Foon-hei also supposedly bit the dust. The explanation for his return amounts to little more than, if you’ll excuse the pun, a cop-out. The fresh-faced Zhang Huiwen, star of Zhang Yimou’s Coming Home, is unconvincing as Lam’s badass bodyguard.

Line Walker is at once overblown and undercooked, packed with big-budget sound and fury but pointlessly frustrating instead of riveting. Director Jazz Poon is unable to keep the story from spiralling into a tangled mess, which is likely to alienate fans of the TV show and newcomers alike.