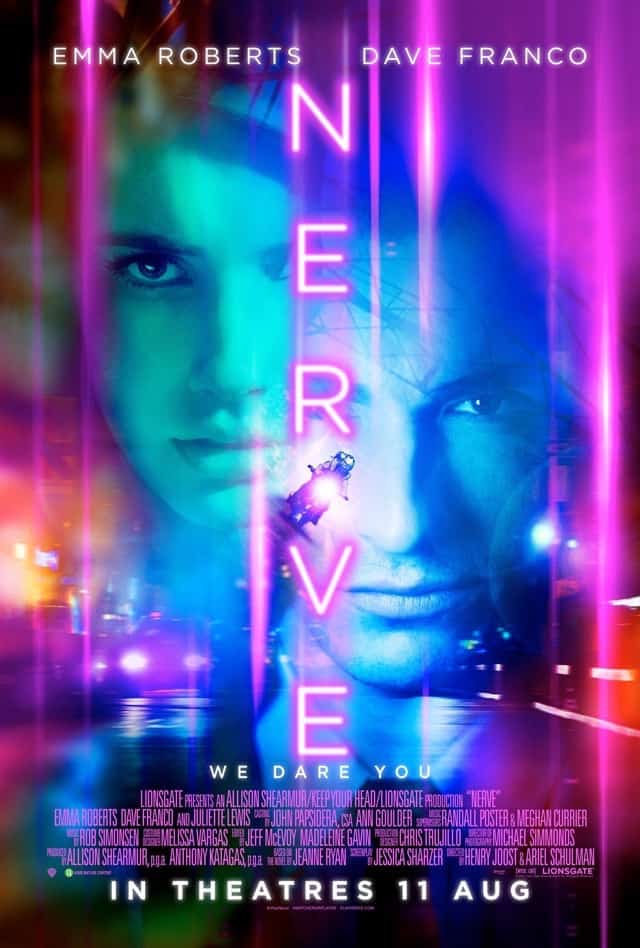 Calling something a “game” just makes it sound so innocent, even if it’s anything but. In this thriller, the online reality game Nerve is all the rage. “Players” participate in dares that escalate in risk and monetary rewards, aiming to accumulate as many “watchers” following their exploits as possible. Venus “Vee” Delmonico (Roberts), a reserved high school senior from Staten Island, is introduced to Nerve by her outgoing friend Sydney (Meade). Tommy (Heizer), also close friend of Vee’s, is wary of the game and begins investigating it on the dark web. Vee is paired with Ian (Franco), a stranger who is quickly climbing the Nerve ranks. Vee’s mother Nancy (Lewis) is unaware of what her daughter is mixed up in, and what began for Vee as an exercise in taking risks and stepping out of her comfort zone quickly becomes a heady, deadly adventure.

Nerve is based on Jeanne Ryan’s 2012 Young Adult novel of the same name. Henry Joost and Ariel Schulman direct from a screenplay adapted by Jessica Sharzer. Joost and Schulman are best known for their documentary Catfish, which chronicled the online relationship between Schulman’s brother and a woman who might not be who she claims to be. Nerve’s premise is reminiscent of the Thai horror film 13 Beloved and its Hollywood remake 13 Sins, in which an unwitting salesman performs increasingly dangerous and humiliating acts for money. Nerve can also be described as The Game for millennials. The quest for online recognition and an easy payday is something most teens can relate to, and while several elements are quite a stretch, it’s not completely implausible to imagine the YOLO (you only live once) set embracing an app like Nerve.

Nerve is very much tailored for maximum teen appeal, slick and trendy but occasionally feeling like it’s trying too hard to pander to its target audience. It’s peppered with soon-to-be-dated slang and there’s even a cameo from prominent YouTube personality Casey Neistat. It’s intended as a satirical cautionary tale, warning against peer pressure and of the ugly side that the blind pursuit of likes and followers might have. However, the film wants to have its cake and eat it too, by making Nerve look seductively exciting. Its finger-wagging indictment of hiding behind online anonymity is clumsily preachy, and the climax somewhat deflates the edge-of-your-seat thrills that have been building up to that point. Still, it’s hard not to get caught up in the mounting stakes, experiencing the illicit thrills vicariously.

While it’s initially difficult to buy Roberts as an awkward outcast who can’t muster up the courage to talk to the jock on whom she’s nursing a crush, the character of Vee makes for an ideal entry point. She’s the outsider who gets swept up in the Nerve craze, equally overcome by the euphoria of shedding her inhibitions and the creeping dread of the consequences that could arise by her continued participation. She makes for an appealing lead who is easy to root for even as we question her judgement.

Franco isn’t necessarily who comes to mind when one thinks “sexy bad boy” – his brother James probably fits that description slightly better. Ian and Vee are suddenly flung together by the mechanics of the game, and it is fun to watch the relationship between the characters develop. Franco is too earnestly likeable to be wholly convincing as a roguish, enigmatic figure astride his motorcycle, but that affability ends up serving him well. The supporting characters are quite thinly sketched, but serve their respective purposes. Heizer’s Tommy is the sensible nice guy stuck firmly in the friend zone and whose hacking expertise comes in handy later, while Meade’s Sydney is every bit the stereotypical vampy queen bee. Lewis is stuck in kind of a nothing part, looking worried and demanding to know what her daughter is up to and doing little else.

The cleverest thing about Nerve is how it appears to be more subversive than it really is, with nothing that makes this wildly inappropriate for younger teens. If you’re not in the target demographic, this might induce a tinge of “get off my lawn you darn millennials” sentiment, but it’s never annoying to an alienating extent. The ending is too pat to be satisfying, but it’s a safe enough distance away from being a howl-inducing cop-out. Teenagers glued to their smartphone screens might feel like they’ve been suckered into a Public Service Announcement with the message “don’t get too carried away on social media”, but the sharply crafted thrills make for a palatable coating.

Summary: While Nerve’s commentary on chasing after online fame is on-the-nose, it moves along at a good clip and is entertaining enough that you’ll resist checking your phone for the 96-minute duration.