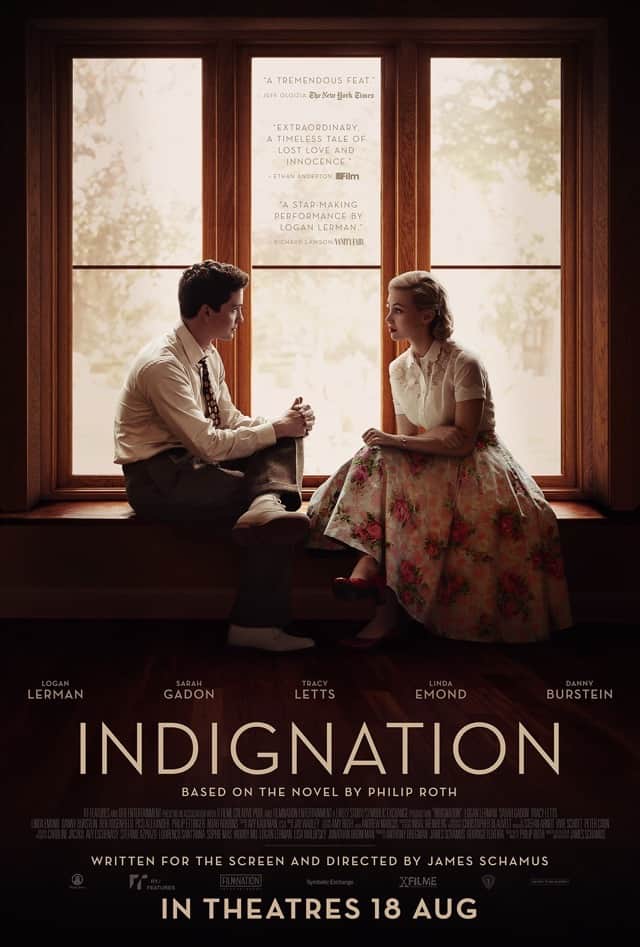 Philip Roth is considered a pre-eminent American writer, whose work centres around the Jewish-American experience. Indignation, adapted from Roth’s novel of the same name, revolves around Marcus Messner (Lerman), a Jewish college student. The son of kosher butcher Max (Burstein) and Esther (Emond), Marcus is exempted from being drafted to serve in the Korean War because he is going to college. Leaving his hometown of Newark, New Jersey for Winesburg College in Ohio, he is immediately smitten with the beguiling Olivia Hutton (Gadon), who comes from a wealthy family but who has had a troubled upbringing. After a disagreement with his roommates Bertram Flusser (Rosenfield) and Ron Foxman (Ettinger), Marcus requests a transfer to a different dorm room. When the school’s dean Hawes Caudwell (Letts) requests to see Marcus, the two butt heads, Marcus taking issue with the mandatory chapel attendance. Departing from his Jewish roots and embracing atheism, Marcus must come to terms with his own religious views as he experiences a sexual awakening.

Indignation marks the directorial debut of James Schamus, a veteran producer and screenwriter who is an oft-collaborator of Ang Lee. Roth himself hails from Newark and attended college in the 50s, Indignation’s semi-autobiographical elements making it a personal project for the author. As a coming-of-age period piece, Indignation approaches the fairly common themes of falling in love and questioning the beliefs with which one was brought up with considerable poise. Indignation is measured in its pace and many of the shots are symmetrically framed, visually reinforcing the juxtaposition of the fictional college’s stuffy atmosphere and the frank sexuality that is displayed. There’s a sprinkling of drol humour in just the right doses throughout the predominantly sombre piece. However, the film does often come off as distant, and the use of voiceovers in an effort to preserve some of Roth’s prose is occasionally awkward.

Lerman leverages his boy-next-door charm for all it’s worth in Indignation, getting to bust some heretofore unseen dramatic chops. It’s a mostly quiet performance, and Lerman is able to find the core of a character who is intelligent, but doesn’t have everything figured out. The character of Marcus isn’t one who questions authority because it’s cool to rebel, and the scenes between Lerman and Letts are masterfully acted. Letts can play the prickly, unlikeable authority figure in his sleep, yet Dean Caudwell isn’t a cartoon villain, and it is entertaining to see how the confrontation starts out relatively polite, and becomes heated while stopping short of being wildly uncivil.

While Gadon’s delivery is a little stilted, she’s still able to create a compelling, magnetic figure in the form of Olivia. Here impeccably put-together exterior, comprising 50s frocks and topped with soft blonde curls, belie a damaged soul. Yet, Olivia doesn’t function as a broken woman whom the protagonist feels is duty-bound to put back together. In all the interactions between Marcus and Olivia, one gets the sense that there’s raw passion lurking beneath a façade of politeness and conformity. Gadon has yet to hit to big time, but a few more roles like this one might be just what it takes.

Both Burstein and Emond fit the expectations of Jewish parents of that era, and it’s easy to see why Marcus longs to get out from under their thumbs, even if all the haranguing ultimately comes from a place of love. While there are impactful moments in Indignation, this reviewer felt like he couldn’t leap all the way in. The handsomeness of the piece sometimes works against it, making the story seem stodgier than it really is. Its abrupt conclusion is also as frustrating as it is intriguing.

Summary: Logan Lerman gets a platform to shine, but Indignation could use a little more urgency in getting audiences invested in its protagonist’s struggles.