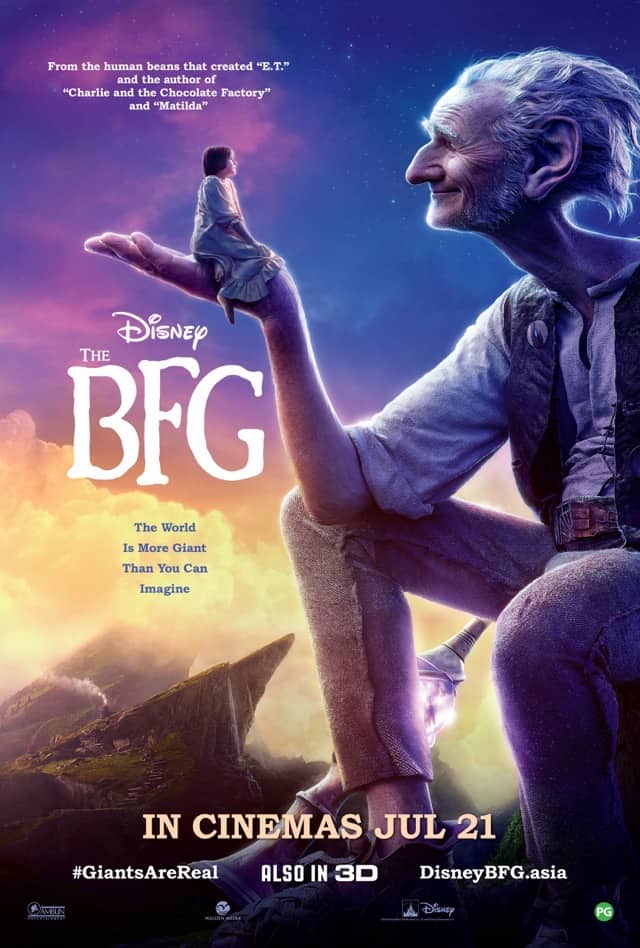 During the 90s, Wall Street securities analyst Joe Tinker stated “there are only two brand names in the business: Disney and Spielberg.” Now, these two juggernaut childhood-shapers have joined forces with The BFG. Sophie (Barnhill) is a young orphan who is spirited away to Giant Country by the Big Friendly Giant, or BFG (Rylance). The BFG catches and distributes dreams to the children of London in the dead of night. Sophie is initially fearful of the BFG, but is soon convinced that he is benign. The other giants who call Giant Country home however, are not. The man-eating giants, led by the towering Fleshlumpeater (Clement) and his sidekick Bloodbottler (Hader), bully the BFG and suspect that he might be harbouring a tasty “human bean”. Sophie decides to set up an audience for the BFG with none other than Her Majesty, Queen Elizabeth II (Wilton), so the other nasty giants can be dealt with once and for all.

The BFG is adapted from Roald Dahl’s beloved children’s book of the same name. Steven Spielberg was once strongly associated with heart-warming escapist tales, but over the last two decades or so has turned most of his attention to prestige pictures like Lincoln and Bridge of Spies – though there’s still the occasional The Adventures of Tintin or Indiana Jones and the Kingdom of the Crystal Skull. The BFG re-teams Spielberg with the late screenwriter Melissa Mathison, who penned E.T.: The Extra-Terrestrial; the film is dedicated to her memory. The BFG has plenty of charm, but lacks a narrative impetus, and is thus difficult to get into. Not every movie has to feature life-and-death stakes, but surely Spielberg of all people knows that a little peril can go a long way. For most of the film, Sophie is pretty much just hanging out with the BFG, and even when she’s threatened by the supposedly fearsome giants, the sense of danger just doesn’t take hold.

The BFG is very agreeable family entertainment, and in keeping in the “sweetness tinged with rudeness” spirit of Dahl’s writing, features what is likely the first-ever fart joke in a Spielberg movie. The performance capture work and the visual effects that integrate Sophie with the computer-generated giants are of excellent quality. Visual effects supervisor Joe Letteri, whose credits include the Lord of the Rings and Hobbit films, Avatar, and Rise and Dawn of the Planet of the Apes, is a four-time Oscar winner, after all. There is, however, a noticeable trade-off: the giants, the villainous ones in particular, can sometimes come off as cartoony, because making them too realistic would result in falling headlong into the dreaded uncanny valley. As it stands, some audience members might find the BFG creepy rather than endearing, but this reviewer isn’t among them.

Rylance, who won a Best Supporting Actor Oscar for his turn in Bridge of Spies, seems to have become Spielberg’s new favourite person: he’s already secured roles in the director’s next two films, Ready Player One and The Kidnapping of Edgardo Mortara. The design of the BFG himself retains the defining features as drawn by Dahl’s regular illustrator Quentin Blake, and the performance capture approach allows for all of Rylance’s subtle expressions to shine through. The malapropisms and neologisms that pepper the BFG’s speech, as delivered by Rylance, give the character a folksy charm. He’s the absent-minded but well-meaning doddering grandfather, having taken on a larger-than-life form. The BFG also has a surprisingly tragic backstory that isn’t in the book, and as a tool for character development, it does work.

Barnhill makes for a spirited Sophie, with a dash of another Dahl protagonist, Matilda, evident in this incarnation. The interaction between Sophie and the BFG is wonderfully acted by both performers, and Barnhill’s turn is all the more impressive when one remembers there wasn’t actually a giant there for her to act against. In some ways, its reminiscent of Neel Sethi’s Mowgli from The Jungle Book earlier this year. Barnhill certainly deserves a place in the pantheon of memorable child actors from Spielberg films.

While a semblance of Rylance’s features is evident in the BFG’s digitally animated face, Fleshlumpeater, Bloodbottler and the other markedly less friendly giants do not resemble their respective voice/performance capture actors, meaning that less of the performers’ personality comes through. Wilton moves from Downton Abbey to Buckingham Palace, and her portrayal of the Queen is amusing and affectionate without becoming too much of a caricature. As the Queen’s butler Tibbs, Rafe Spall is on fine comic form. Rebecca Hall, Spall’s co-star from the Wide Sargasso Sea TV movie, is the picture of class as the Queen’s maid Mary.

The scenes in which the BFG carefully crafts the dreams could be seen as a metaphor for filmmaking, and Spielberg is a consummate crafter of dreams. It’s pretty to look at and composer John Williams is in full Harry Potter mode here – unfortunately, the music is pleasant but nowhere as memorable. Alas, The BFG is far from his most magical work, and we’re not sure that the typical kid’s attention span would be able to withstand its unhurried pace.

Summary: The BFG features delightful performances from its two leads, but the lack of narrative drive means it’s only intermittently engaging.