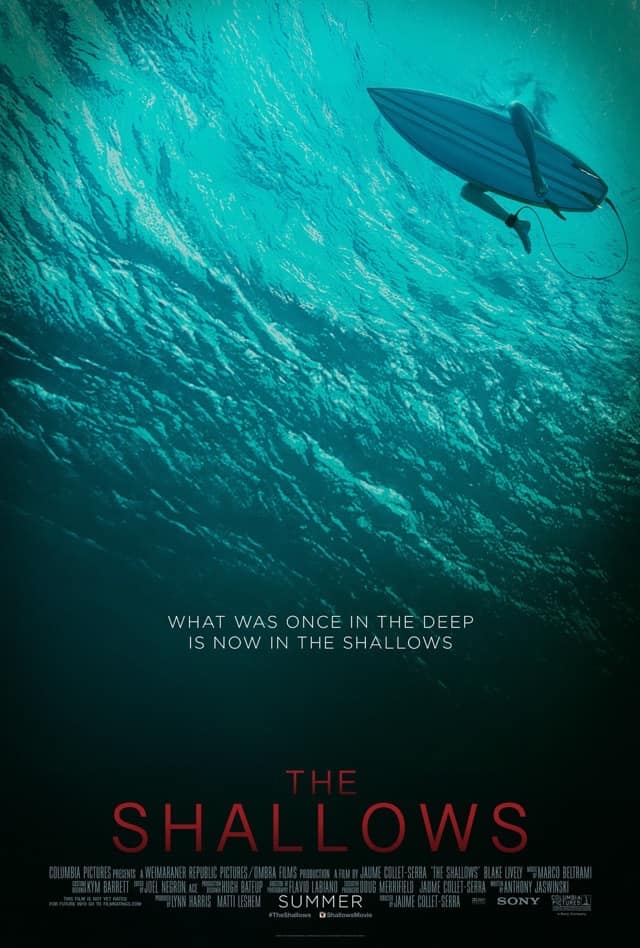 Blake Lively has to keep from becoming shark bait (Ooh ha ha!) in this survival thriller. Lively plays medical student Nancy Adams, who has travelled to Mexico in search of a secluded beach where her mother once surfed years ago. She hitches a ride from local resident Carlos (Jaenada), heading into the water to catch the waves. Nancy meets two other surfers (Corzo and Salas) and is enjoying herself, but the fun is cut short when she’s attacked by a great white shark. Nancy is able to swim to the relative safety of an isolated rocky outcrop, but with the tide coming in, Nancy has to signal for help or swim back to the beach, all while the shark ominously encircles her.

Director Jaume Collet-Serra’s last three films, Unknown, Non-Stop and Run All Night, starred Liam Neeson, who will also be in his next film The Commuter. It’s a bit of a shame he didn’t continue that run by having Neeson voice the shark. Serra works from a screenplay by Anthony Jaswinski – originally entitled ‘In The Deep’, it was a hot script that sparked a bidding war. As far as X meets Y elevator pitches go, “Jaws meets 127 Hours with a dash of Gravity” is pretty exciting. The result is a self-contained thriller in which the protagonist is paradoxically trapped in an open space, braving a variety of obstacles that are flung her way. It runs a brisk 86 minutes and Collet-Serra’s direction enables the audience to share in Nancy’s desperation. Most viewers might start out chiding Nancy for going out into the water alone, but soon enough, we’re right in her corner.

Lively’s husband Ryan Reynolds spent the majority of the film Buried trapped in a wooden coffin, and it was this role that inspired Lively to take on a project in a similar vein. She makes for a pretty convincing surfer girl and conveys gut-wrenching panic when required. The character gets wounded early on, with Nancy’s expertise as a medical student coming in handy when she has to McGyver some first aid. A few laughs ease the tension, most of which come courtesy of Nancy’s interaction with a wounded seagull stuck on the rock alongside her.

Sure, there are plenty of lingering shots of Lively’s bikini-clad physique, but Collet-Serra displays enough taste such that it doesn’t end up being uncomfortably leery. By the time the climactic confrontation rolls around, this reviewer was primed and ready to see Lively in full-on badass mode, and the final showdown is a rip-roaring, white knuckle sequence – if a little overblown and silly compared to what’s come before. Serra has revealed in interviews that the shark is female, because female great whites tend to be larger and thus more visually intimidating, making this faintly reminiscent of Ripley going up against the Alien Queen in Aliens.

While the central premise of woman vs. shark is rock solid, the attempts to give Nancy some characterisation through her back-story ring false. There’s been a death in the family and Nancy’s relationship with her father (Cullen) is somewhat strained. These elements come off as unnecessary and undercut the purity of the visceral, stripped-down “mission: survive” narrative that powers the film.

Strong production values make this relatively small film feel grander, with the photogenic Lord Howe Island in New South Wales, Australia doubling for the story’s unspecified Mexican beach. The visual effects work, supervised by Scott E. Anderson, is top-notch. If the shark looks phony, nobody’s going to be on the edge of their seat cheering for Nancy to triumph against the apex predator. Thankfully, the digitally-created great white is entirely convincing, coming off as a living, breathing beast.

Apart from the occasional Open Water or The Reef, most modern shark movies are intentionally goofy: nobody’s going to be genuinely terrified when watching Sharknado, Sharktopus or Ghost Shark. As such, it’s pretty gratifying to see a frighteningly plausible natural horror thriller that plays on the common fear of what lurks within the open ocean.