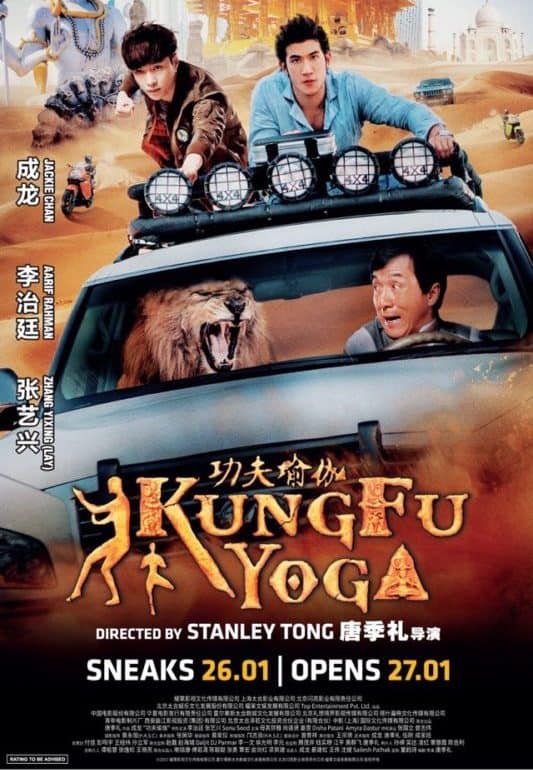 After hanging out with John Cusack and Adrien Brody in the Mongolian desert in Dragon Blade, Jackie Chan sets his sights on India with this Chinese New Year blockbuster. Jackie plays renowned archaeologist Jack Chen, who is enlisted by Indian professor Ashmita (Patani) to locate the fabled lost treasure of the Magadha Kingdom. Jack assembles his team, comprising his assistants Xiaoguang (Zhang Yixing) and Nuomin (Muqi) and the treasure hunter Jones (Rahman), the son of Jack’s old friend. Along the way, Jack and his crew face off against Randall (Sood), a billionaire who claims to be the rightful heir to the treasure. The adventure takes Jack and his cohorts from Xi’an, China, to the Tibetan glaciers, to Dubai and finally to Rajasthan, India.

Jackie Chan has had a long association with the ‘adventurer archaeologist’ subgenre. From the Armour of God series to its semi-reboot CZ12, and from The Myth to the animated series The Jackie Chan Adventures, you’d think Jackie would have gotten the formula right by now. No such luck. Kung Fu Yoga might not be as jarring a cultural mishmash as the afore-mentioned Dragon Blade, but it’s still an ungainly, vaguely insulting creature. Things are preposterous from the outset, with a bizarre video game-esque animated prologue setting the scene. The story of Wang Xuance, a Tang Dynasty guard officer and diplomat who was sent as an ambassador to India in the 7th Century, serves as the jumping-off point for the plot. The chunks of exposition are ostensibly to lend the film some historical plausibility, but everything is so ridiculous that they needn’t have tried.

Kung Fu Yoga’s central quest is difficult to care about, and even when Jack and company are menaced by armed mercenaries on snowmobiles, there’s little urgency or peril to be found. The film’s globe-trotting is poorly justified, with the story leaping from locale to locale without much rhythm. Shooting on location in such places as Svínafellsjökull, Iceland and Rajasthan, India does give Kung Fu Yoga a sense of scale, but this is undercut any time the action moves into patently phony underground tombs. The scenes set in India showcase regrettably retrograde clichés like snake charmers, levitating yogis and the Indian rope trick. This lazy exoticism was already embarrassing in the 1983 Bond film Octopussy, let alone in 2017.

The action sequences are mostly gag-driven, lacking the robust kinetics of classic Jackie Chan fights. While Jackie has maintained himself far better than many action stars his age; his martial arts prowess is not enough to salvage Kung Fu Yoga. The film’s central set piece is a wacky car chase through the streets of Dubai, featuring such shenanigans as a pet lion in the backseat of Jack’s car. While China Daily has claimed that this is a real big cat, it is often obvious that many of the shots feature a computer-generated lion. Not a terrible one, mind you, but conspicuous enough to stick out. Besides the lion, Kung Fu Yoga is positively stuffed with digitally-created critters, including elephants, wolves, cobras and hyenas. This contributes to the film being an altogether cartoony affair.

Leave it to Jackie to force some preachiness into an action-adventure comedy. “I told you, the treasure doesn’t belong to you. It belongs to the whole world, it belongs to the people,” he proclaims beatifically. Not quite as snappy as “it belongs in a museum!” Speaking of Indiana Jones, Kung Fu Yoga cribs heavily from the series. There’s even a female student who stamps her eyelids with heart shapes to woo Xiaoguang, exactly like the student in Raiders of the Lost Ark with “LOVE YOU” written on her eyelids. We can’t decide if we love or hate that Jack actually name-checks Indiana Jones in the film itself. It’s a rip-off passed off as a homage, which is as gleefully shameless as it gets.

The supporting cast is attractive and serves mostly as window dressing. Patani’s character introduces herself as a professor of archaeology, which is about as believable as when Denise Richards played a nuclear physicist. Patani seems like she’s reading off cue cards most of the time. It’s more than a little creepy when Jack makes googly eyes at Ashmita, considering the 38 year age gap between Patani and Jackie.

Zhang Yixing a.k.a. Lay of Exo fame is just here to fulfil the unwritten rule that every Chinese blockbuster movie must include at least one boyband star. The camera leers lasciviously at Miya Muqi, dubbed “China’s most beautiful Yoga instructor”. Rahman comes to closest to exhibiting any discernible personality, working his roguish charm for all it’s worth. And yes, his character really is named ‘Jones’. In the meantime, Randall’s motivations do not stretch beyond “this belonged to my ancestors and now it belongs to me! MINE!” so Sood is stuck playing an utterly generic villain. Aamir Khan was briefly attached to play Randall, but dropped out due to schedulingconflicts with Dangal.

[SPOILER ALERT] It ends with a dance party. A dance party. A. DANCE. PARTY. Minutes after Jack and Randall engage in a battle to the death, Kung Fu Yoga closes with a big, obnoxious, dance number. It reads as a case of “there are Bollywood actors in the film so that’s something we have to do.” [END SPOILERS]

There’s a less cynical, more engaging China-India co-production hidden deep beneath the grating silliness that fills Kung Fu Yoga. Given the resources available to director Stanley Tong and the production, a straightforward adventurer archaeologist yarn shouldn’t be that difficult to get right.