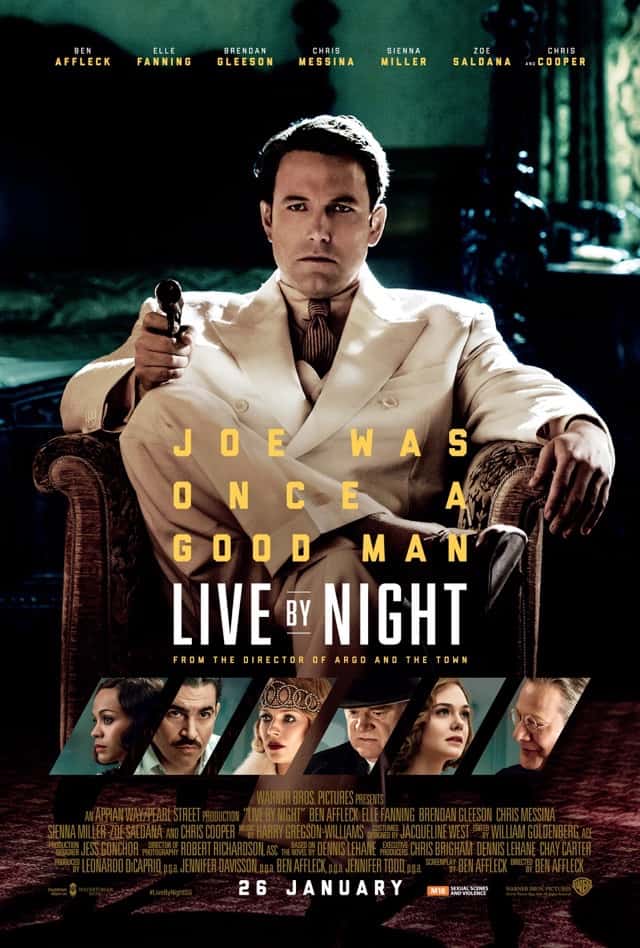 Yes, well. Ben Affleck directing, producing and starring in a film called Live by Night just begs for a smart-alecky Caped Crusader reference, since he’ll also be directing, producing and starring in The Batman. Live by Night, however, is assuredly not just some vanity project for Affleck’s bored billionaire Bruce Wayne-persona to whittle time away on in between bouts of nocturnal crime-fighting (sorry, couldn’t resist a smart-alecky Caped Crusader reference). It’s a solid crime drama in its own right with enough smarts to temper the inevitable excess of guns, booze and babes.

Based on the novel of the same name by Dennis Lehane, Live by Night opens with Affleck’s Joe Coughlin newly returned from the trenches of WWI, where he has cultivated an abiding mistrust of authority figures, including his deputy chief inspector father (Gleeson). Joe’s anti-authoritarian urges lead him to go on a robbery spree in Prohibition-era Boston with his Italian-American buddy Dion (Messina) in tow. An unfortunate relationship with Emma Gould (Miller), the Irish mob boss’ arm candy, however, soon has him seeking greener pastures down south in the multi-ethnic environs of Ybor City, Florida. Once there, he meets the lovely Cuban beauty Graciella Corrales (Saldana) and begins building a criminal empire across traditional gang lines.

There’s something about Dennis Lehane novels and Hollywood: Live by Night is the fourth film adaptation of Lehane’s work. Of the first three, two were award-winning (Eastwood’s Mystic River and Affleck’s directorial debut Gone Baby Gone), and the last was a box-office hit (Scorsese’s Shutter Island). Those are big shoes to fill, but Live by Night manages to somewhat hold its own.

The story is of the slow-burning variety, keeping you on tenterhooks until an explosive final denouement. The attention to detail vis-à-vis the sets and costumes is exquisite, from the brownstones of Boston to the tropical climes of Tampa. All the visuals are exceedingly lush, and your eyeballs will thank you for the feast. If you are into period flavour and a dash of history on the side, then congratulations. You’ll more than get your fix circa the US in the 1920s. There is no doubt that Affleck has competently pieced together a winner – Live by Night is smart, but not to the point of head-scratching obscurity; stylish, but not to the point of avant-garde incomprehensibility.

And yet it lacks that little something that pushes a well-made film over into greatness. Joe Coughlin’s relationship with woman of colour Graciella is perhaps too overtly portrayed as a progressive oasis amidst a desert of conservatism. The Ku Klux Klan, the members of which object to Coughlin’s romance, is perhaps a little too self-consciously demonised. Live by Night hits all the right notes, but there’s something artificial about its synthetic perfection, right down to the flowery dialogue and expertly choreographed gang fights. It is, in fact, similar to how Shutter Island is sometimes regarded in relation to the rest of Scorsese’s oeuvre: a genre piece par excellence that falls short of becoming a game-changer. Affleck still has some way to go before he can be regarded as a great, rather than merely good, director.

The same applies to cast performances. Sienna Miller rocks the Irish accent as girl-on-the-make Emma Gould, but Zoe Saldana’s portrayal of Graciella falls too neatly into the pigeonhole of ‘exotic foreign love interest’. Italian actor Remo Girone is a standout as mafia don Maso Pescatore, though he has too little time to shine in a film with as large an ensemble as Live by Night. A similar problem afflicts Elle Fanning as the troubled Loretta Figgis, not being onscreen enough to properly weave her ethereal web. Affleck is, as usual, a dependable leading man who anchors the film with his performance, even if it still isn’t likely for the acting accolades to come his way in the near future. Then again, what does he need acting accolades for? He’s Batman.

Summary: Good but not great, Live by Night should still manage to allay the anxious fears of fanboys anticipating a disastrous The Batman.