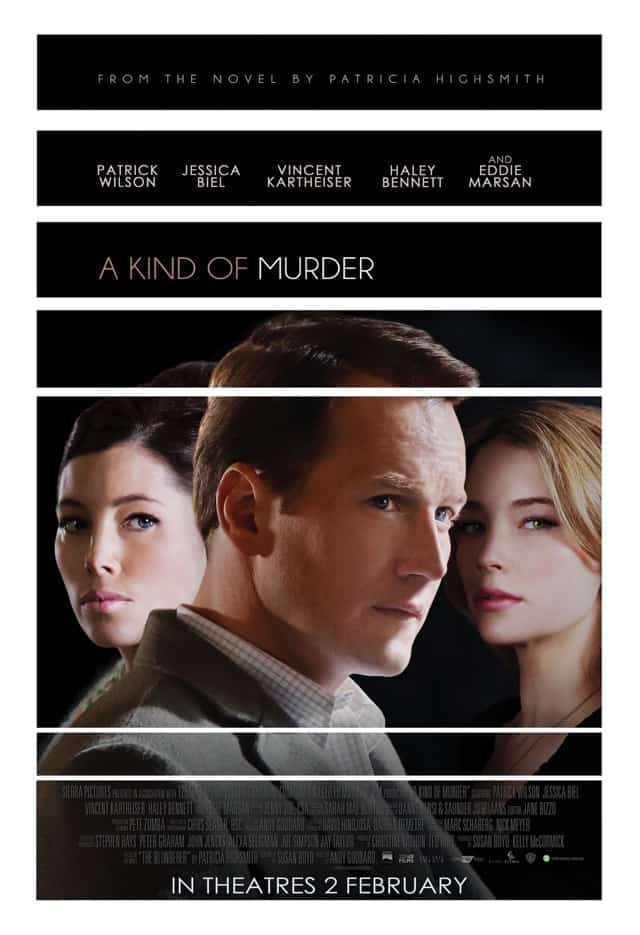 Novelist Patricia Highsmith’s psychological thrillers, including Strangers on a Train, The Talented Mr. Ripley and Two Faces of January, have lent themselves well to many masterful adaptations in the past. A Kind of Murder is based on Highsmith’s third novel The Blunderer, and is set in 1960s New York. Walter Stackhouse (Wilson) is an architect and aspiring crime novelist, who is unhappily married to his wife Clara (Biel). Walter becomes fascinated with the case of bookstore owner Kimmel (Marsan), who was suspected of killing his wife. Walter finds himself attracted to singer Ellie Briess (Bennett), further feeding his fantasies of killing Clara. Walter earns the suspicion of NYPD Detective Lawrence Corby (Kartheiser) and soon finds his sanity unravelling.

The Blunderer was earlier adapted into the 1963 French film Enough Rope. This new adaptation is directed by Andy Goddard, who has helmed episodes of Downton Abbey, and is written for the screen by Susan Boyd, who optioned the novel with her screenwriter/novelist husband William. A Kind of Murder wears its 60s New York setting as an affectation, and never feels like it authentically takes place in that world. The costumes, automobiles and sets all look convincing and the cinematography is often beautiful, but the film is pervaded with a sense of artifice. Because it’s so mannered and manicured, A Kind of Murder fails to grip the audience and pull them into the mystery. The acting is so stilted across the board that the cast seems like high school students stumbling through an amateur production of Death of a Salesman.

Walter Stackhouse has the makings of a compelling character: he’s wealthy but unsatisfied with his existence, and his preoccupation with true crime and crime fiction might be driving him to commit murder himself. While Wilson could pass for a leading man in a 60s crime drama, between the stilted delivery and clunky dialogue, Walter becomes a bland cipher who is difficult to care about. The rocky relationship between Walter and Clara is at the heart of the film’s conflict. However, their brief interactions fail to paint a clear picture of why this marriage has deteriorated to the point where Walter would entertain the thought of murder to extricate himself from it.

Biel’s Clara should be a compelling character in her own right, justifiably jealous when her husband makes eyes at a beguiling younger woman. Instead, we see Clara haranguing Walter and doing little else. Bennett makes for an alluring ‘other woman’, who might be innocent or a devious femme fatale. However, Ellie becomes increasingly extraneous as the story progresses. Walter’s entanglement with the murder suspect Kimmel and the possibly unstable police detective Corby lack the potent mind games a psychological thriller should possess.

Director Goddard seems intent on capturing the superficial look of a noir thriller, and when we get to men in heavy coats and hats pursuing each other through foggy streets, A Kind of Murder is visually captivating. Unfortunately, the whodunit plot is so mangled in an effort to make things more complicated than they need to be, such that the audience is held at a distance. The film also feels far longer than its 95-minute running time, soporific rather than thrilling.

Summary: A Kind of Murder has a glossy exterior, but fails to deliver the engaging thrills expected of a Patricia Highsmith adaptation.