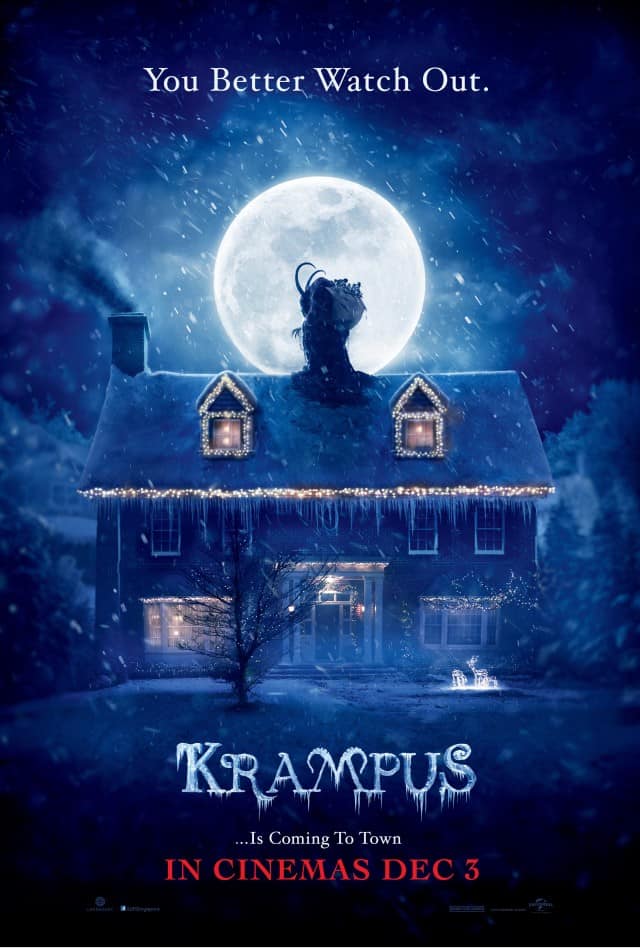 This Christmas, the weather outside is far from the only thing that’s frightful. Tommy (Scott) and Sarah (Collette) Engel, along with their children Max (Anthony) and Beth (Owen), are gearing up for the annual torture that is their relatives visiting for Christmas. Sarah’s sister Linda (Tolman) arrives with her husband Howard (Koechner), their four children and Aunt Dorothy (Ferrell) in tow. They’re stuck inside with no electricity due to a ferocious blizzard. Tommy’s mother (Stadler) begins acting strangely, as she usually does around Christmas, and soon the family is terrorised by some particularly nasty uninvited guests. It turns out that Max has inadvertently summoned the Christmas demon Krampus, Santa Claus’ evil counterpart, and good cheer is not on the agenda.

Krampus, the cloaked, horned figure from Germanic folklore who punishes misbehaving children during Christmas, has only recently entered American popular culture. Krampus seems like a natural antagonist for a film of the holiday horror subgenre and we’re getting two this festive season, the other one being a Canadian anthology movie called A Christmas Horror Story. Michael Dougherty, who helmed the acclaimed cult anthology horror film Trick ‘r Treat, wrote and directed Krampus. While he does ensure the film is tonally consistent and doesn’t stray too far into campiness, Krampus is far from the hearty Christmas meal horror fans have been hoping it would be. 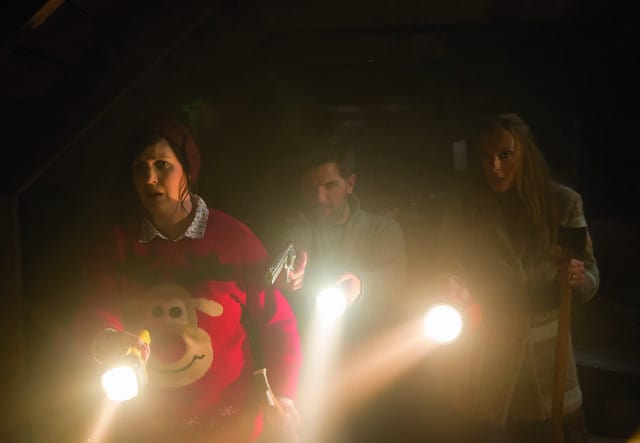 The Krampus mythology is one that most American audiences wouldn’t be familiar with, and the inclusion of a slightly creepy German grandmother figure hints that the film will dive headlong into the trove of tales surrounding this dark anti-Santa. We do get a haunting animated flashback sequence, but there is very little that makes Krampus and his minions stand out from being run-of-the-mill horror movie monsters. There are some fantastic creature effects furnished by Weta Workshop, but apart from CGI gingerbread men attacking David Koechner with a nail gun, there aren’t any particularly inventive set-pieces to be had. The justification that is given for Krampus selecting this particular family as his target is quite flimsy, and the moral of treasuring one’s relatives in spite of how annoying they might be comes off as half-hearted. The film’s scathing opening sequence is set to Bing Crosby’s It’s Beginning to Look a lot like Christmas and depicts crowds violently jostling each other in a frenzy while Christmas shopping at a mall. It suggests a bitter satirical edge which is not followed up on. 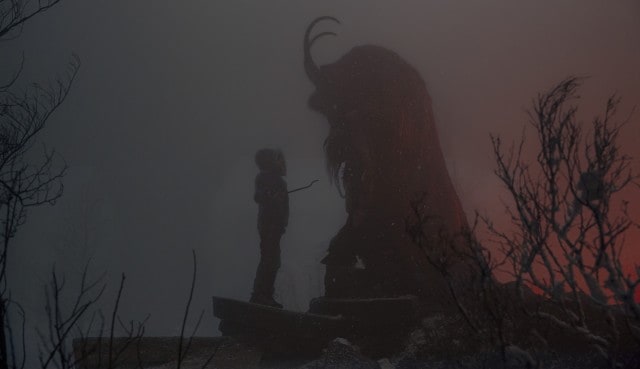 Scott and Collette play it straight and their steadfastness in refusing to wink and nod at the audience does help the material. Anthony, memorably loveable as Jon Favreau’s on-screen son in Chef, is a convincingly earnest good kid. While none of the performances are terrible, everyone here is a family comedy cliché: we have the harried mother who has to hold the fort when the relatives descend on her home, the teenage daughter who is never more than a minute away from rolling her eyes, the boorish uncle, and the belligerent, alcoholic grandaunt. Austrian actress Krista Stadler does lend the film some texture, keeping “Omi” from being a full-on “creepy grandma” type ala The Visit.

The first half of Krampus has dysfunctional family members squabbling, the second half has said family members chased through the house by an assortment of Christmas-themed monsters and the ending is vague at best, a howl-worthy cop-out at worst. The Krampus legend has all the makings of a terrific horror flick, showcasing the dark side of a holiday that’s associated with commercialised cheeriness. There are some effective atmospheric touches, such as the incorporation of the already-kinda creepy Carol of the Bells into the soundtrack. At times, the film almost feels like it could be something in the vein of Gremlins, though it lacks the demented energy to reach that level. Unfortunately, Krampus doesn’t make optimal use of the legend and its PG-13 rating does somewhat hamper the scares it can provide.