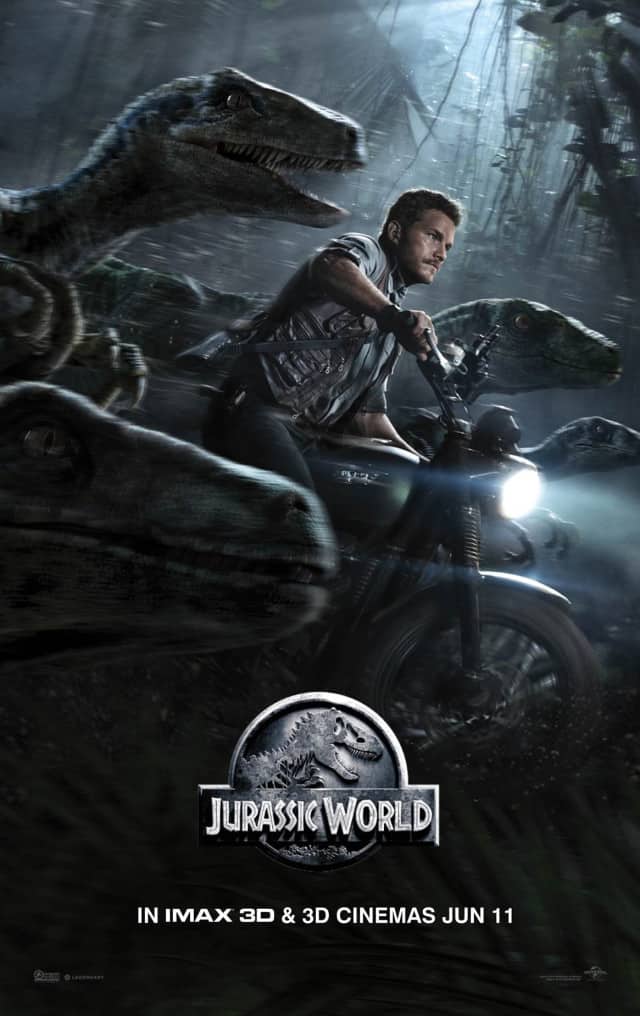 “The park is open.” With those four little words, the 14-year-long wait for a new Jurassic Park film has finally come to an end. 22 years after the events of the first film, Isla Nublar is now home to a fully functioning dinosaur theme park called “Jurassic World”, welcoming thousands of visitors each day. Billionaire Simon Masrani (Khan) has been entrusted with overseeing the park after the passing of founder John Hammond. As visitors hunger for more excitement, the park’s geneticists, led by Dr. Henry Wu (Wong), have spliced together a new hybrid dinosaur, the vicious Indominus rex. In the meantime, the park’s overworked Operations Manager Claire Dearing (Howard) is expecting her nephews Zach (Robinson) and Gray (Simpkins) who are spending the weekend at the Jurassic World resort. When the I. rex escapes and threatens the safety of the visitors, it is up to Velociraptor trainer Owen Grady (Pratt) and the Jurassic World security team to contain the savage behemoth. 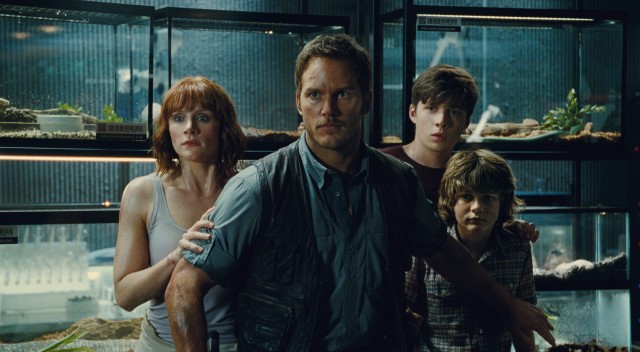 A fourth Jurassic Park film spent over a decade clawing its way out of development hell following 2001’s Jurassic Park 3. Director Colin Trevorrow, known for the indie comedy-drama Safety Not Guaranteed, was given the responsibility of breathing new life into the franchise, not unlike how InGen’s scientists bring dinosaurs back from extinction. The expectations were massive and Trevorrow’s lack of experience with big blockbusters seemed to be against him, but he has come through, not unlike the Russo brothers with Captain America: The Winter Soldier. The screenplay by Rick Jaffa, Amanda Silver, Derek Connolly and Trevorrow, contains a healthy amount of self-awareness. There are jibes at corporate sponsorship and an explanation as to the focus group origins of the name of the Indominus rex. Visitors to Jurassic World have grown difficult to impress, demanding bigger, more exciting genetically-engineered attractions, not unlike moviegoers and their ever-increasing appetite for effects-laden tentpole extravaganzas. The main difference is it’s unlikely for Avengers 8 to break out of the screen and eat the audience alive. 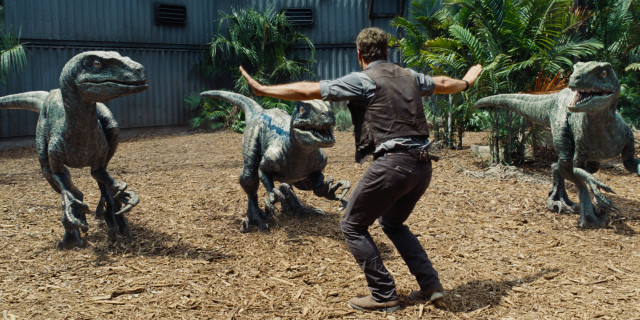 A fully-functioning dinosaur theme park seems like the natural place for a new story to unfold and, for a series ostensibly about a theme park, is long overdue. A tourist attraction at full capacity means more potential for things to go horribly, entertainingly awry. There is a lot of effort put into designing the park and the filmmakers have achieved a sense of verisimilitude with the chain restaurants, open-air arenas, monorail systems and bored employees seen in real-life theme parks. While pushing the franchise forward, there is no shortage of very respectful nods to the past and aficionados of the first Jurassic Park movie will find many rewarding Easter Eggs. A sequence set in the derelict visitor’s centre from the first film borders on the indulgent but this reviewer was too busy squealing with fan glee to really be bothered. 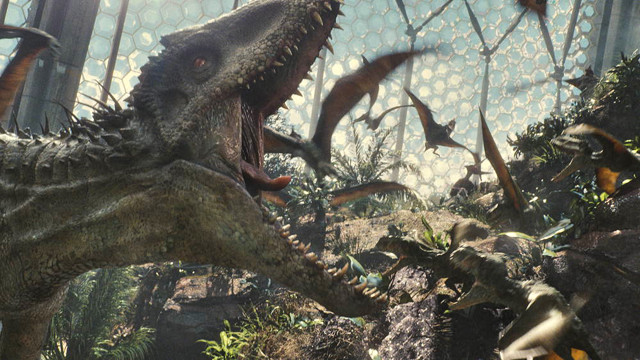 A crucial element of what made the first film so enjoyable was the suspense. The classic T. rex paddock escape and the “Raptors in the kitchen” scene were masterfully staged and dripping with tension. There are several great scenes in this movie that go for the scares and that do have that adrenaline-pumping thrill ride quality to them. One does get a kick out of seeing the Indominus rex make quick work of heavily-armed, highly trained security contractors and a scene in which a swarm of Pterosaurs escapes their aviary to pluck hapless visitors from the park’s grounds is a wonderful “all hell breaks loose” scene of full-on panic. 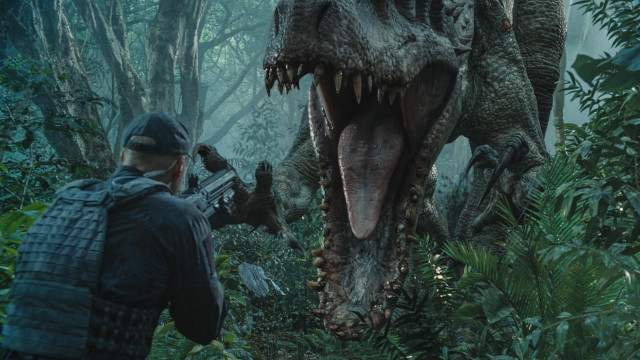 The Indominus rex is an appropriately formidable creature, but sometimes lacks the tactility of the T. rex in the original. There’s also that classic movie monster pitfall, where the big bad beast is so impervious to anything that it can get a little tedious trying to defeat it. Many were worried that the element of trained Velociraptors would detract from the ferocity of these iconic dinosaurs, but rest assured that they’re still unpredictable and still scary. After all, people train Rottweilers, lions and bears, with sometimes-deadly consequences. The film does slightly disappoint with some of the visual effects work – for the most part, the dinosaurs are adequately convincing, but the scene in which a sight-seeing “gyrosphere” travels amongst herds of herbivorous dinosaurs feels particularly artificial. Animatronic effects are still employed, but this one does lean far heavier on CGI than the earlier movies. 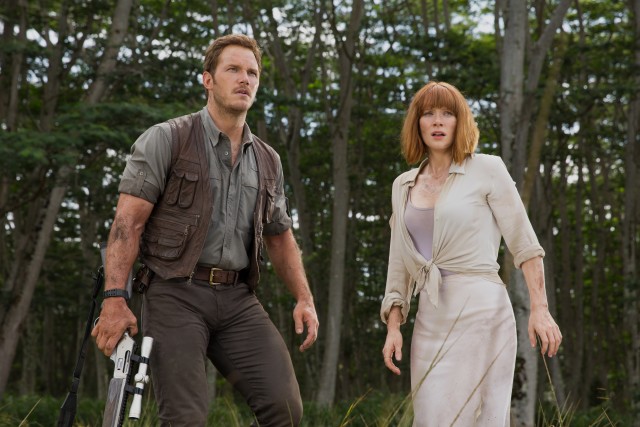 The characters in this film are archetypes and are all relatively simple, but then again, so were the characters in the first movie and in this case, it’s done pretty well. Chris Pratt further cements his A-list action star status as the rugged ex-Navy man Owen Grady, ably carrying the film as a traditional hero. In the scenes in which Owen is interacting with the four Velociraptors under his charge, Pratt displays a knack for acting against nothing, perhaps a skill he honed working with Rocket and Groot in Guardians of the Galaxy. Bryce Dallas Howard plays more of a caricature, the tightly wound career woman just seconds from snapping under pressure, but it’s great that there’s a woman in charge of running things at the park this time around and we are profoundly impressed by how well she can run in heels. 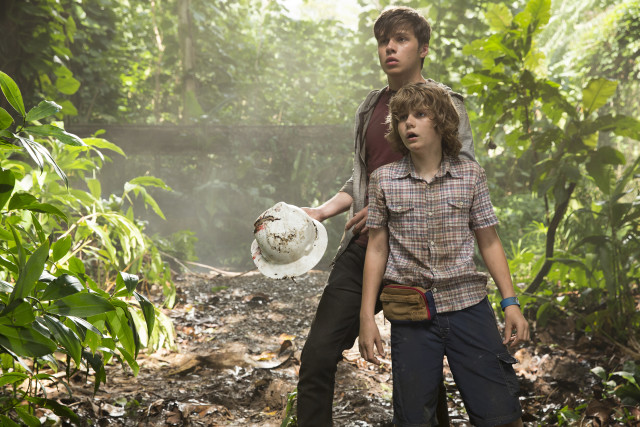 Vincent D’onofrio’s hard-nosed Vic Hoskins, the head of security operations for InGen, is also one-dimensional, dead set on using Velociraptors in military applications. This may be an in-joke referring to an early draft of the film, which had gun-toting human-dinosaur hybrid mercenaries. Yes, we’re glad that didn’t happen too. Irrfan Khan chews some of the lush jungle scenery as eccentric Richard Branson-wannabe Simon Masrani. Ty Simpkins is the stock “kid in peril” and Nick Robinson is his aloof older brother – a film with as high an “embracing one’s inner child” quotient as this one has got to have kid characters in it, and they do far less shrieking than Lex and Tim did in the original. Jake Johnson’s comic relief techie Lowery gets some excellent lines and is, thankfully, not annoying. It’s also really nice to see B.D. Wong again – his Dr. Henry Wu is the only returning character from the first film. 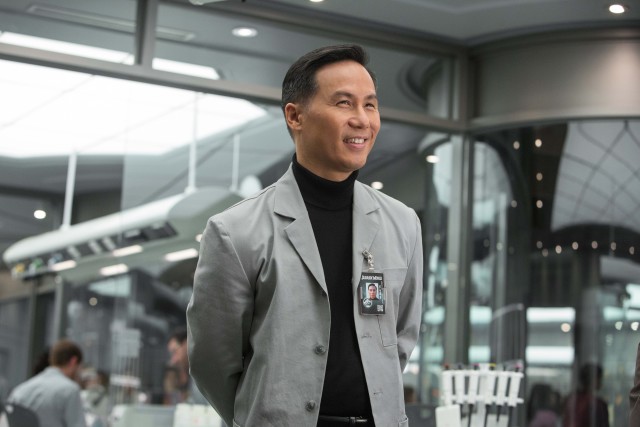 Jurassic World hits all the notes expected of a Jurassic Park film without merely feeling like it’s going through the motions. It’s clear that there’s earnestness and passion behind this and that Trevorrow is a fan who wants to do right by other fans. There’s definitely a tip of the hat to Steven Spielberg and the contemporary sci-fi masterpiece that was 1993’s Jurassic Park – at the same time, there isn’t a slavishness to what has come before. If there’s anything today that could come close to inspiring the wonderment and terror that Jurassic Park did in the kids who first watched it in 1993, Jurassic World would be it.

Summary: Well worth the 14-year wait. A new world beckons; come on in! 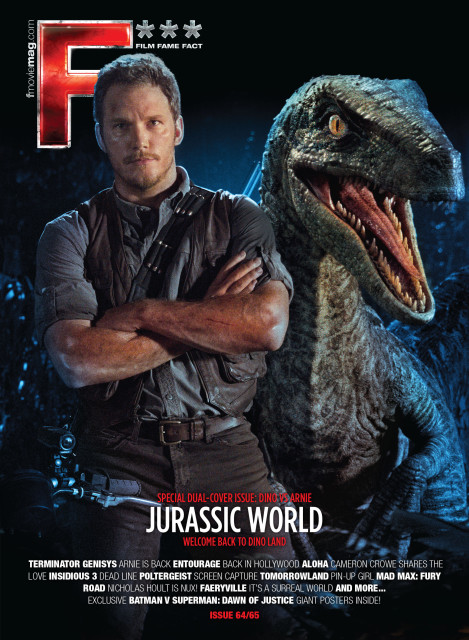