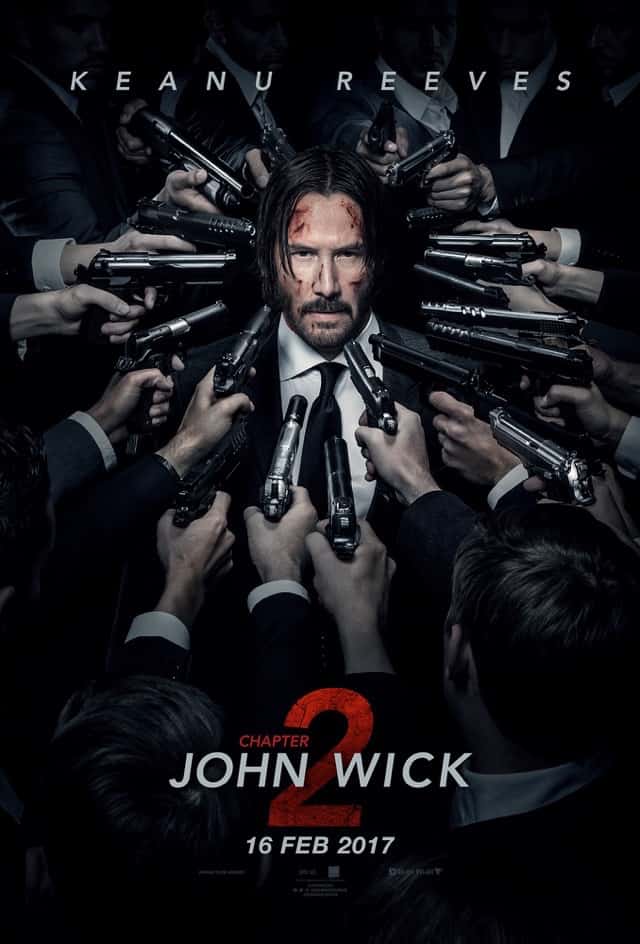 Much like Japanese animator Hayao Miyazaki, John Wick (Reeves) is a man who just can’t retire. After avenging the death of his puppy, the final gift from his late wife Helen (Moynahan), John thinks his hitman days are finally over. However, his former associate Santino D’Antonio (Scamarcio) comes calling to collect on a blood oath Santino and John made years earlier. Santino tasks John with killing Santino’s sister Gianna (Gerini), so Santino can take her place on a high council of assassins. John reluctantly travels to Rome, facing off against scores of skilled hired guns. These include Gianna’s bodyguard Cassian (Common) and Santino’s security chief Ares (Rose). Back in New York, John seeks the assistance of old allies Winston (McShane), who runs the Continental Hotel, and Charon (Reddick), the hotel’s concierge. John also reunites with the Bowery King (Fishburne), a crime lord with whom John has had a tempestuous professional relationship. With a large bounty put on his head, it’s open season on John Wick.

2014’s John Wick is hailed as a minor masterpiece in contemporary action cinema. While it contained many familiar tropes of the hitman movie subgenre, it boasted exceedingly stylish action and established an intriguing mini-mythology. Chad Stahelski, who directed the first film with fellow stunt coordinator/second unit director David Leitch, helms this outing solo. John Wick: Chapter 2 contains everything that worked the first time around. It’s largely more of the same, but it’s good. Screenwriter Derek Kolstad expands on the heightened world, introducing more elements central to the apparently global assassin subculture. Not only are there hitmen decked out in expensive suits who hang out in plush hotels, there are homeless assassins now. Much like the first go-round, this is a tonally assured work: there are dry winks and nods at the more absurd aspects of the premise, while steering clear of all-out self-parody.

Aided by veteran stunt coordinators Darrin Prescott and J.J. Perry, Stahelski serves up a surfeit of fluidly orchestrated violence. The body count here far exceeds the first film, and there are plenty of messy headshots along the way. All the fights, shootouts and chases hit that sweet spot of being stylised and designed while retaining visceral impact. John is a one-man army and because of his nigh-superhuman prowess, the audience never really feels that he’s in grave danger from his opponents. However, the proceedings are never boring and always eye-catching. A showdown in the ancient catacombs beneath Rome is contrasted with a game of cat-and-mouse set in a maze of mirrors. The latter is at once disorienting and mesmerizing, and is also a technical feat seeing how a set comprised entirely of mirrors would make it difficult to hide cameras and crew.

It’s been repeatedly noted that Reeves is not an actor with staggering emotional range, but just as in the first John Wick, he makes for a compelling force of nature. Even pretending to be an expert marksman or hand-to-hand combatant is tricky, but Reeves makes it all look so effortless. Deep beneath his unyielding surface, John is a sorrowful figure. Even though John should be no less fantastical a character than any action hero played by Arnold Schwarzenegger or Sylvester Stallone, Reeves gives him a vital grounding.

Many of the supporting players from the first film, including McShane, Reddick and Leguizamo, return, giving this a strong sense of continuity. Italian actor Scamarcio exudes the sliminess one would expect of a mafia heir without turning the character into a caricature. Gerini’s Gianna has a confrontation with John that is as sexy as it ominous. The film’s detour to Rome seems a little too brief, but the location and the D’Antonio siblings do expand the story’s scope. Iconic Italian actor Franco Nero makes a cameo as the manager of The Continental Rome.

Common gets to grapple with Reeves in an intense fight, but is ultimately little more than a generic henchman. Rose gets a slightly more interesting role as the mute Ares. She cuts an elegant figure in a suit and is entrancing as she signs her “dialogue”. It’s fun to see Reeves reunite with Fishburne, his co-star from the Matrix films. Fishburne’s Bowery King is cheery and exuberant, but we get the sense that this belies an uncompromising ruthlessness. Peter Stormare, who has long been on speed-dial for Hollywood casting directors in search of scenery-chomping European villains, shows up too.

John Wick: Chapter 2 contains equal measures of muscularity and finesse, an action movie carved from polished obsidian. As the middle instalment in a planned trilogy, the film’s conclusion is open-ended, but its cliff-hanger is tantalising rather than howl-inducing. On top of that, the pit bull that John adopted at the end of the first film is adorably obedient.

Summary: Fans of the first film will be transfixed by John Wick: Chapter 2’s brutal, balletic action. The fascinating hitman subculture lore also gets built upon.