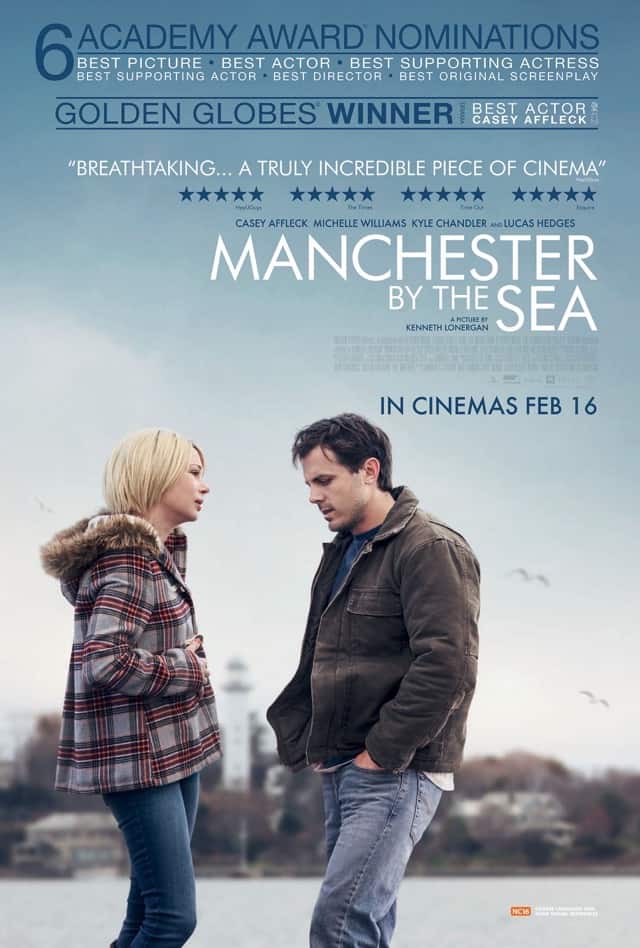 While promoting Batman v Superman, Ben Affleck turned forlorn when the film’s negative reception was brought up. His expression went viral and was coined “Sadfleck”. Now, it’s his brother Casey’s turn to do the moping in this drama.

Casey Affleck plays Lee Chandler, a janitor in Quincy, Massachusetts. Lee keeps to himself and sometimes has terse confrontations with the apartment’s tenants. When Lee’s elder brother Joe (Chandler) dies of a heart attack, Lee is surprised to learn that he has been named the legal guardian of Joe’s teenage son Patrick (Hedges). Because Joe’s ex-wife Elise (Mol) is an alcoholic, Joe decided against giving her custody of Patrick. Lee reluctantly returns to his hometown of Manchester-by-the-Sea to look after Patrick. Lee’s sullen caginess makes it difficult for him and his nephew to bond meaningfully. Going back to Manchester-by-the-Sea unearths painful memories for Lee, whose marriage with his ex-wife Randi (Williams) ended under tragic circumstances. He dreads the prospect of permanently moving back, while Patrick is adamant against having his life uprooted and moving to Quincy with Lee.

Manchester by the Sea has been the subject of Oscar buzz ever since its premiere at the Sundance film festival in 2016. It’s on the “best of 2016” lists of numerous critics, has been repeatedly deemed “a masterpiece” and at the time of writing, is up for six Oscar nominations.

We understand why it’s been such a hit with critics: it’s a character study about grief and loss that’s mature and largely subdued. In an awards season that takes place during a particularly fraught period in American politics, it’s not tackling any topical issues. We appreciate that despite the undercurrent of pain, it’s not oppressively bleak, and writer-director Kenneth Lonergan allows the film to be gently humorous where appropriate. It avoids gloopy sentiment or overwrought histrionics and unfolds naturistically.

By shunning surface-level excitement, Manchester by the Sea feels swamped by mundanity. It’s not an easy film to get into because of its unhurried pace and uneventful nature. The film’s nonlinear structure takes a bit of getting used to, especially because there’s no obvious indication that certain scenes are flashbacks. As an examination of repressed emotions and the angst of the working class white male, Manchester by the Sea is painfully honest but can come across as self-indulgent. Its 137-minute running time is altogether too long, and the emotional impact delivered by a dramatic reveal in the middle of the film dissipates as it continues.

Matt Damon was originally cast as Lee, and remains as a producer. Affleck’s leading turn has been raking in the plaudits, and deservedly so: it’s not a showy performance and is sensitively nuanced. Lee is flat-out unlikeable, and picks fights in bars because he has no outlet through which to channel his hurt and frustration. The reasons for Lee’s self-destructive tendencies and self-loathing are revealed as the film progresses. Affleck demonstrates an understanding of externalising grief, which can be handled clumsily in a lesser actor’s hands. It’s a performance that engenders equal amounts of sympathy and frustration – just when one thinks Lee might make a breakthrough, he falls back into a pattern of self-destruction.

Hedges’ Patrick is written as more than the stock annoying teenager, and the dynamic he shares with Affleck works, even though the relationship goes through repetitive beats. Both Patrick and Lee are in dark places in their lives, but neither will open up to the other. There is some comedy derived from Patrick’s inept garage band, and that he’s juggling romantic relationships with two separate girls. There’s the danger that Patrick might turn out like his uncle, and if the film were more actively engaging, we’d be rooting for both to course-correct.

Williams’ performance as Lee’s ex-wife Randi has garnered significant positive attention, given her relatively short screen time. The flashbacks show a happier time, when Lee and Randi’s disagreements were small and expected. The marriage implodes off-screen, and when Lee and Randi meet again years later, it is an emotional moment. Because nothing that exciting occurs, it dampens the visceral pain of the trauma that led to Lee and Randi parting ways.

While Manchester by the Sea doesn’t contain nearly as much “woe is me” wallowing in self-pity as this review suggests, it is depressing by design, with brief glimmers of levity allowing the viewer to take a breath. Lesley Barber’s Baroque-inspired score is beautiful, but is sometimes slathered on too thick, and at odds with the muted realism Lonergan is aiming for. We comprehend that not all movies are meant to be entertaining in the traditional sense of the word, but while many are praising Manchester by the Sea as understated and sublime, it will generate apathy among more impatient viewers.

Summary: This awards season favourite is a strongly-acted portrait of grief that is sometimes too distant and meandering to be compelling.