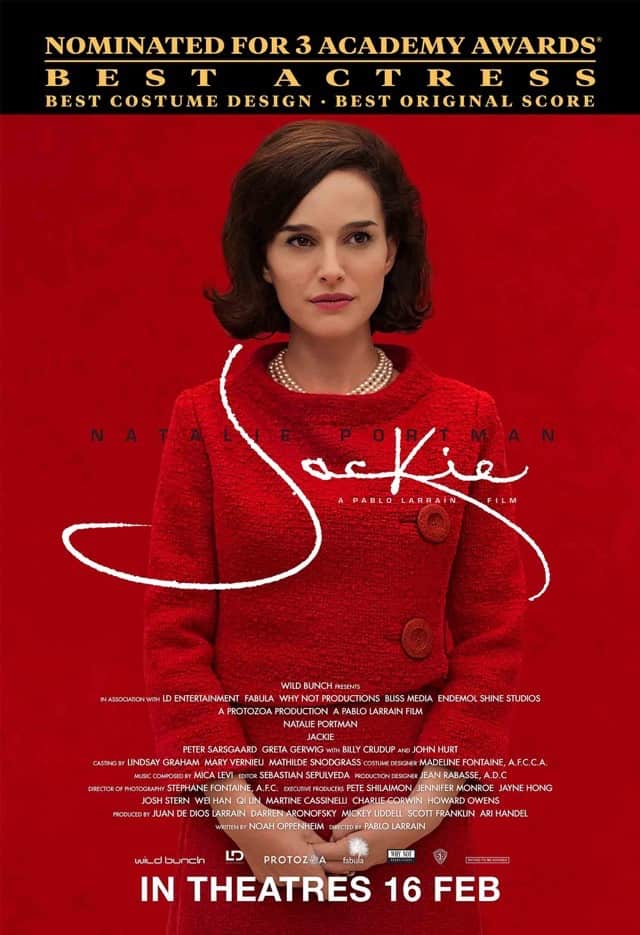 Jacqueline “Jackie” Bouvier, the wife of John F. Kennedy, is among the most iconic First Ladies in U.S. history. This biopic pulls back the curtain on the queen of Camelot, limning the immediate aftermath of her husband’s assassination. Jackie (Portman) hosts a journalist (Crudup) at her home in Hyannis Port, Massachusetts, sitting down for an interview. It is not long after the assassination of president John F. Kennedy (Phillipson) in Dallas. The film depicts Jackie’s interactions with her brother-in-law Robert F. Kennedy (Sarsgaard), her confidante and the White House social secretary Nancy Tuckerman (Gerwig) and a priest (Hurt) who counsels Jackie on the day of the funeral. Jackie must also explain JFK’s death to their young children Caroline (Sunny Pelant) and John Jr. (Aiden and Brody Weinberg).

Jackie aims to pierce the iconography that has surrounded Jacqueline Kennedy. Director Pablo Larraín and screenwriter Noah Oppenheim seek to unearth the woman behind the elegant style icon, while also sidestepping the expected tropes of an awards season biopic. The framing device of Jacqueline Kennedy’s interview with journalist Theodore H. White (who is unnamed in the film) contextualises several vignettes which are deliberately placed out of order. This creates a disorienting effect and makes it more challenging to follow Jackie’s emotional journey, but in a strange way, is also more engaging. However, this does lead to a choppiness, and there’s the possibility that without this structural trickery, the story would be boring and straightforward.

Part of Jackie is a flashback to the filming of the 1962 television special A Tour of the White House, in which Jackie guides audiences nationwide through the executive mansion after the extensive remodelling she had spearheaded. Real footage from that TV special is spliced together with footage shot for this film, giving the subconscious effect that we are given a privileged look at the angles the TV cameras did not see. While much of Jackie is dedicated to how the title character processed the trauma of sitting beside her husband as he was violently killed, the film also explores how she cultivated her image and crafted the First Family’s legacy. Jackie discusses JFK’s fondness for the musical Camelot with the journalist, and a scene in which she stands in the otherwise empty Oval Office with the musical’s title song playing in the background is positively haunting.

Since winning the Best Actress Oscar for Black Swan, Portman hasn’t taken on many high-profile roles, and has recently turned her attention to directing. Jackie puts her back on the awards season map, and her Oscar nomination for this film is well-deserved. It’s a bravura yet nuanced turn, and if the prospect of playing such a well-known public figure intimidated her, Portman never shows it. While she looks and sounds the part, Jackie is about more than how its title character looked or sounded. Portman conveys the profound sorrow and the pressure of life in the public eye, while also essaying Jackie’s impish appeal. The glimpses of fire behind her eyes are impactful, and when the camera locks on her face as she weeps, one cannot look away.

Because of the film’s laser focus on Jackie herself, the supporting players are largely relegated to the background. Crudup’s Journalist is not even named in the film and is meant to be a cipher, therefore there’s not much personality he’s able to bring to the part. Sarsgaard’s Robert, also crumbling from grief and pressure, is magnetic and volatile. This reviewer was hoping for the relationship between Jackie and her close friend and White House employee Nancy Tuckerman to get more screen time than it did. The late John Hurt is a comforting, warmly authoritative presence even though it’s a small part.

Director Larraín cuts through the narrative of the Kennedy clan as a tragic American fairy-tale, while not necessarily undercutting the notion. This film gives Jackie her due, and is a star vehicle that ideally matches Portman’s talents. First Ladies have been often appraised mainly for their style rather than their own merits, with Jackie inadvertently becoming the poster child for that. Jackie finds the woman behind the coiffed bob, Chanel coat and pearls, painting a vivid portrait of Camelot’s queen.

Summary: A biopic which plays with the genre’s conventions just enough, Jackie features an entrancing turn from Natalie Portman and is respectful of its subject while avoiding blandness.