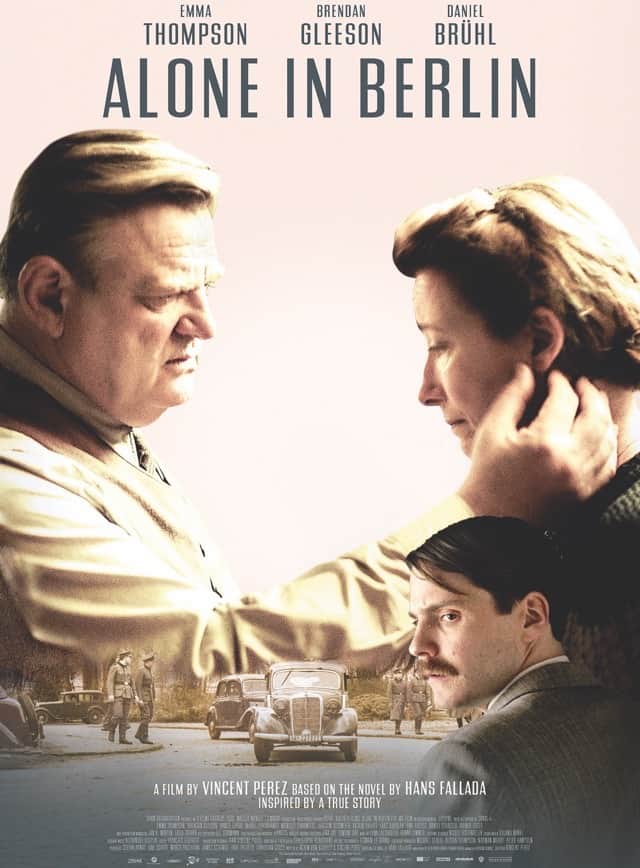 Adapted from Hans Fallada’s 1947 novel Every Man Dies Alone, Alone in Berlin tells of a small but spirited resistance from within the heart of Nazi Germany. It is 1940, and working-class Berliners Otto (Gleeson) and Anna (Thompson) Quangel receive news that their only son has died in combat. After witnessing the treatment of an old Jewish woman in their apartment block, Otto and Anna begin writing postcards containing short messages exhorting for the people to resist Hitler and the Nazis. Otto wants to leave his wife out of it for her protection, but Anna insists in standing alongside her husband. They leave the postcards in public places, and this soon attracts the attention of the police. Escherich (Brühl), the detective put in charge of hunting down the perpetrators, finds himself gaining respect for his elusive targets, while starting to question Nazi ideology.

Every Man Dies Alone is a fictionalisation of the true story of Otto and Elise Hampel, has been adapted for TV and film in German several times, and was also made into a Czech television miniseries. The English translation of the 1947 German novel was only published in 2009. While the story of ordinary German citizens who attempt to stand against the oppressive Nazi regime has the potential to be powerfully resonant, said potential is only glimpsed a few precious times in this film. The family of Swiss actor/director Perez, who also co-wrote the screenplay, experienced the horrors of World War II first-hand. Perez’s grandfather was shot by fascists in Spain, his great uncle was gassed by Nazis, and another uncle died in battle on the Russian front. As such, it’s curious that he seems to approach the material with a distinct lack of passion.

Thanks to location filming in Berlin, Cologne and Görlitz, Alone in Berlin possesses decent production values. Unfortunately, that’s not enough to pull the viewer in. For a film about a time and place where there was danger on all sides, Alone in Berlin fails to generate any urgency or tension. We get an adequate sense of the oppression that the Nazis imposed on their subjects, but nothing leaps off the screen. It’s generic historical drama stuff, when the story of Otto and Elise Hampel deserves a more searing telling.

Thompson and Gleeson are both fine actors. They don’t get too many notes to play beyond “downtrodden”, but are invested in the material. The varying strength of the German accents across the cast can be a little distracting. Mark Rylance was originally cast as Otto, and in part because Gleeson is still unmistakably Irish, we think he might have been a better choice. Brühl tries to give Escherich notes beyond that of the typical dogged inspector, but only makes an emotional impact in the film’s closing moments. The Gestapo agents are stereotypically, blandly evil.

The perspective of the common man living in Nazi Germany coupled with the fact that it’s based on a true story should have made Alone in Berlin a powerful work. Instead, even with its strong lead performances, much of the film is mired in mediocrity. Offering not enough insight into the minds of dissidents in Nazi Germany, nor serving up any wartime cloak-and-dagger mystique, Alone in Berlin will leave most viewers cold.

Summary: Finely-acted but too sluggish and dour to be genuinely moving, Alone in Berlin is far from the full-bodied, stirring tale it should’ve been.