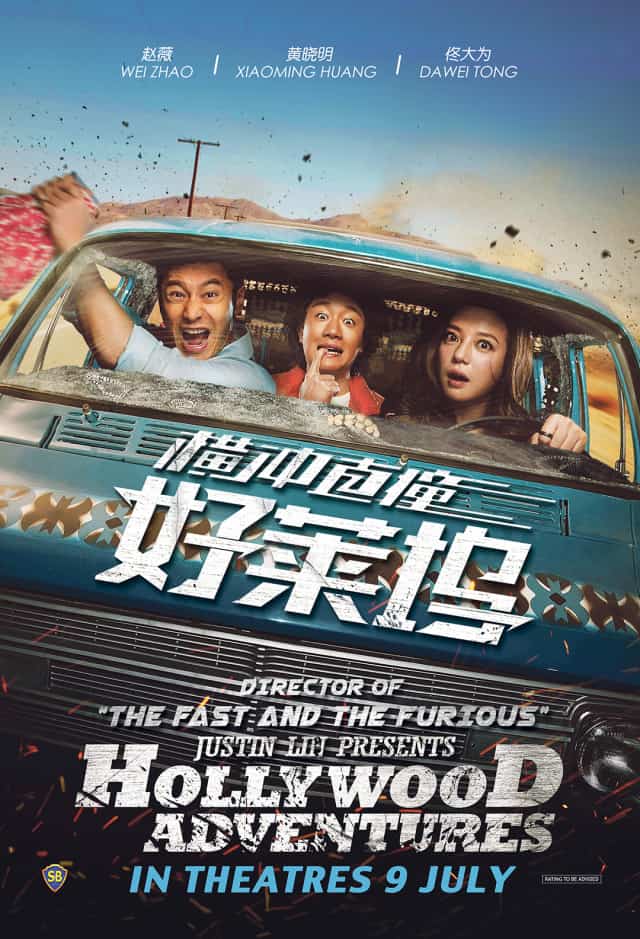 These tourists turn tinsel town topsy-turvy. Say that three times fast. In this action comedy, Huang Xiaoming stars as Beijing car salesman Xiaoming, who is about to propose to his girlfriend Yan Yan (Li) when she up and leaves him to become a production assistant in Hollywood. Xiaoming frantically grabs the last available ticket to L.A., inadvertently joining the “Hollywood Adventures” tour group with garrulous movie buff Dawei (Tong). They arrive in the City of Angels, meeting up with tour guide Wei Wei (Zhao). In the process of his quest to win back the love of his life, Xiaoming stumbles into a smuggling operation, running afoul of various colourful characters including shady motel proprietor Manny Love (Kang), irascible movie director Wronald Wright (Tobolowsky) and diva movie star Gary Buesheimer (Coiro). 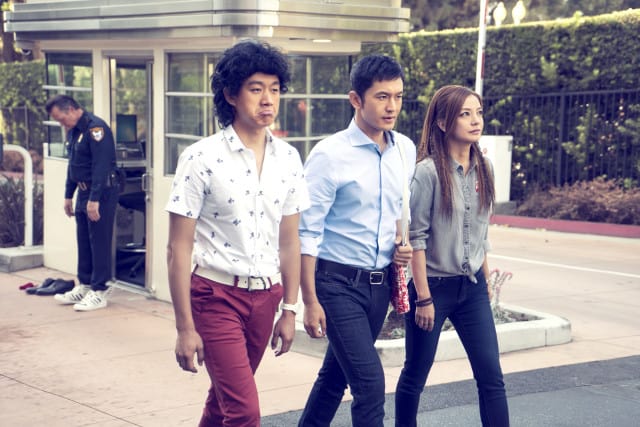 This China-U.S. co-production is half showbiz satire, half “idiots abroad” comedy. Helmed by small-time TV director Timothy Kendall and co-written and co-produced by Justin Lin of Fast and Furious fame, Hollywood Adventures is Lin’s attempt at breaking into the lucrative Chinese film market. The film plays into China’s growing consumption of and fascination with American popular culture, stuffed to the gills with references to movies and TV shows. The creative team, including Lin, Kendall and co-writers Brice Beckham and Philip W. Chung, are all American, casting three of China’s biggest stars in a bid to appeal to Chinese filmgoers. Unfortunately for Lin and company, the film raked in far less than expected upon its opening in China. 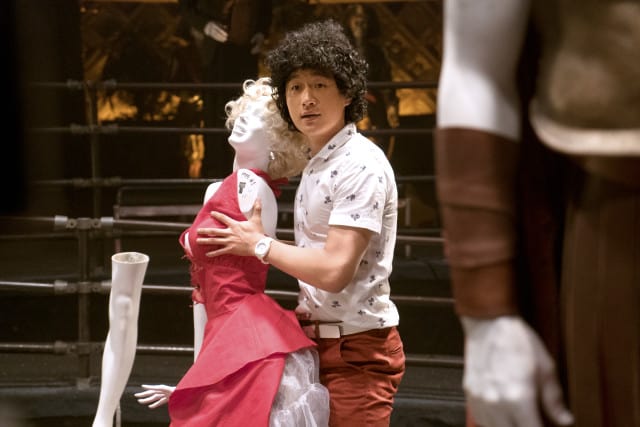 There is the sense throughout the film that the filmmakers are eager to pander to their target audience’s larger-than-life perception of the United States in general and Hollywood in particular. Hollywood Adventures is filled with depictions of ludicrous film industry shenanigans and it portrays Americans as simpletons easily appeased by mindless violence – in-story, a reality TV show called “Punch Me” is sweeping the nation. There are also several surprise celebrity cameos – Dawei has a massive crush on Kat Dennings, whom he naturally runs into in on a movie set, and The Big Bang Theory’s Simon Helberg shows up as a translator. The highlight of these is an appearance by a certain Terminator star, who leaves dignity at the door and skewers his most famous role with amusing aplomb. 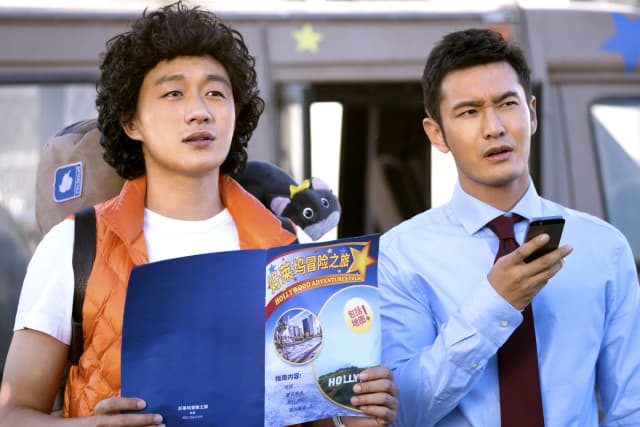 While often unfocused and very, very broad in its comedic stylings, the film does have a fair number of laughs. The Dawei character is one of those guys who speaks exclusively in movie references and quotes and is the source of fourth-wall breaking meta-fictional humour – you’ll notice that all three protagonists share the names of the actors playing them. It’s often very on the nose – upon first seeing Manny, Dawei remarks that he “looks a lot like Han from the Fast and Furious movies” – both characters are played by Sung Kang. However, this type of winking self-awareness is rare in Chinese comedies and fits right in with the L.A. setting of the movie. The film trades in various well-worn formulas, but every time a familiar trope shows up, Dawei is there to remark on it. That doesn’t excuse its lack of originality but it does make it easier to go along with the romp. 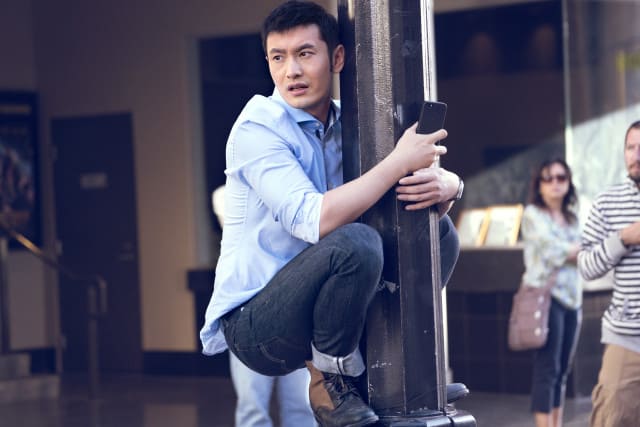 The three leads are excellently cast – Huang Xiaoming plays the strait-laced straight man, Tong Dawei is the silly sidekick and Zhao Wei is the plucky, world-weary lass who has to guide the duo through the unfamiliarity of Hollywood. Tong in particular is admirably game for a variety of embarrassing/dumb scenarios – we somehow wind up witnessing him in drag astride a motorcycle during the film’s climactic action sequence. As is often the case, the de-facto main character is the least distinct, but Huang manages to make Xiaoming adequately appealing. Zhao showcases the comic timing she’s become known for and as she plays the only one of the three leads conversant in English, does most of the interacting with the other characters for the other two. On the other hand, Rhys Coiro is not even a tiny bit convincing as a big-shot movie star involved in some illegal business. We also find it puzzling that the character’s name is a play on “Gary Busey”, of all the “top movie stars” to lampoon. 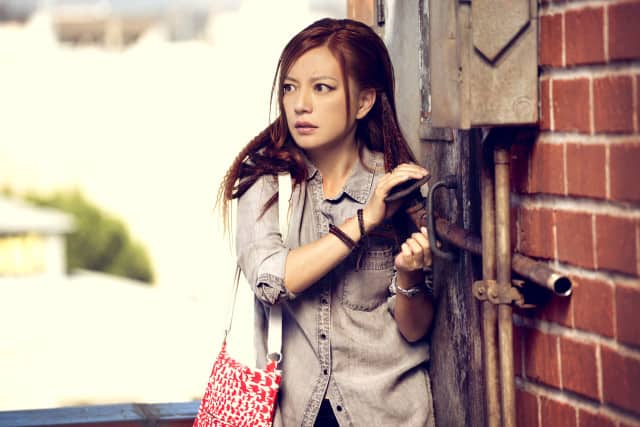 Hollywood Adventures is stupid, but for the most part, it’s amiably so. As a send-up of typical Hollywood excesses, the film ends up partaking in those same excesses, taking a hard right in its third act into thriller territory. There are still gags, but these take a backseat to a kidnapping, a showdown at an exclusive shindig and lots of cars crashing into each other and flipping through the air. The three main characters also rather conveniently become expert sharpshooters, martial artists and stunt performers by the time the denouement rolls around. Even given all that, there’s a fair amount to enjoy and despite its various shortcomings, the movie has enough raucous energy for it to pass as a somewhat entertaining diversion. 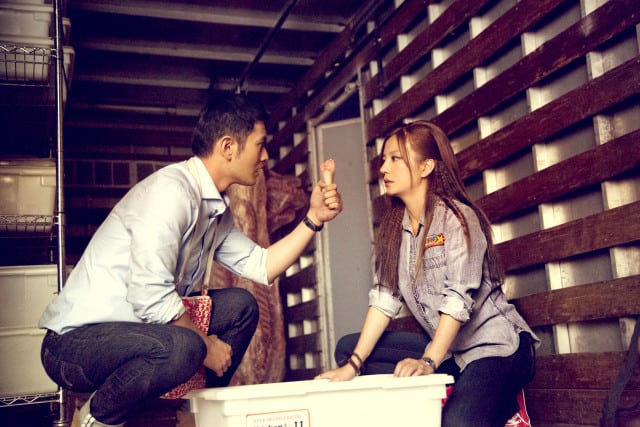 Summary: This rampage through Hollywood is brash and very silly, but the strength of the three leads and a good dose of self-aware humour carry it to the finish line.