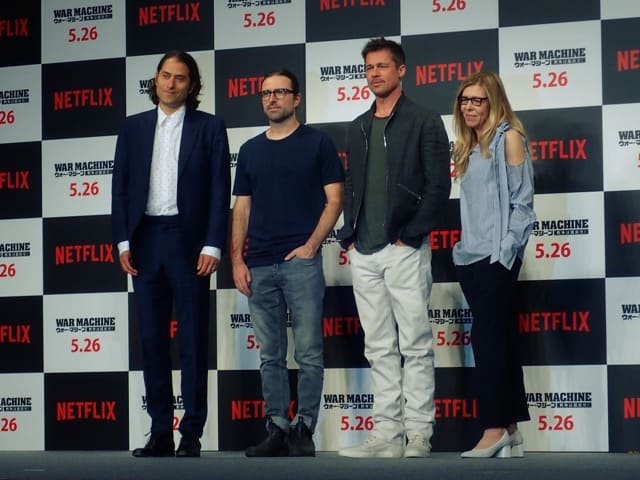 [Tokyo Exclusive] The meteoric rise of online streaming giant Netflix has made several major cinema chains quake in their boots, and for this particular battle, Netflix has come armed with one of the biggest movie stars of the last 20 years: Brad Pitt, who stars in and produces War Machine. F*** was at the Ritz Carlton hotel in Tokyo for a press conference attended by Pitt, writer-director David Michôd and co-producers Jeremy Kleiner and Dede Gardner.

War Machine is based on the non-fiction book The Operators by the late Rolling Stone journalist Michael Hastings. Pitt plays General Glen McMahon, a thinly-veiled fictionalisation of real-life general Stanley McChrystal. A decorated soldier credited with the death of an Al Qaeda leader, McChrystal’s military career came to an end when disparaging comments he made about Vice President Joe Biden appeared in a Rolling Stone article.

Glen McMahon is characterised in the film as a blustering buffoon; Pitt visibly enjoying playing the over-the-top role. Pitt said that he and the filmmakers settled on certain traits, including the character’s awkward posture while running, by deciding what “just made [them] laugh the most.” Pitt observed that McMahon “portrays and sees himself as an emblem of greatness when actually he looks quite silly,” and that the “absurdity of the general” embodied the ultimate pointlessness of the seemingly endless war in Afghanistan.

Pitt was clad in a black jacket over a grey shirt and white trousers, seeming relaxed as he attempted to keep things light by cracking jokes. “I take full credit for the shorts,” Pitt quipped, referring to the shorts that McMahon wears while jogging. He dared all the men present to “start a new trend together” by mimicking the none-too-flattering look. The humorous comment didn’t draw much of a reaction from the Japanese press, and because of the need for questions and answers to be interpreted back and forth from English to Japanese and vice versa, there wasn’t much spontaneity or momentum to the proceedings.

Michôd said it was “terrifying” that the war in Afghanistan has been going on for 16 years. “I couldn’t work out why it has been going on for so long and how it is possible that people- who I would assume are quite smart and capable-are still pretending as though there is some kind of victory waiting for them just around the corner,” Michôd mused. After reading The Operators, it all clicked. “What I saw at the
centre of it was a character, a general who was kind of delusional because he was so removed,” Michôd revealed. In the book, Michôd saw how McChrystal’s ambition “removed him from the experiences of the troops on the ground, and from the civilian world that he was there to serve.” From Michôd’s point of view, the root of the protracted involvement of American and coalition forces in Iraq and Afghanistan was “plain human delusion”.

Gardner echoed Pitt’s sentiments on Netflix, saying “I think everyone has similar intentions, but not everyone has the courage.” Gardner said she “could not have dreamed of a better partner” than Netflix, and that Plan B also had a positive experience working with Netflix for Bong Joon-ho’s upcoming film Okja. Gardner called the Netflix personnel “rock stars”, saying “we try and push boundaries in the stories we tell, and when you meet a company like Netflix who says ‘okay, we want to do that too,’ and they say ‘We have the money for it and we’ve got the manpower to support you’, it’s like a gift from on high.”

War Machine is available on Netflix from 26 May 2017

Read the full article in the upcoming issue of F*** Magazine