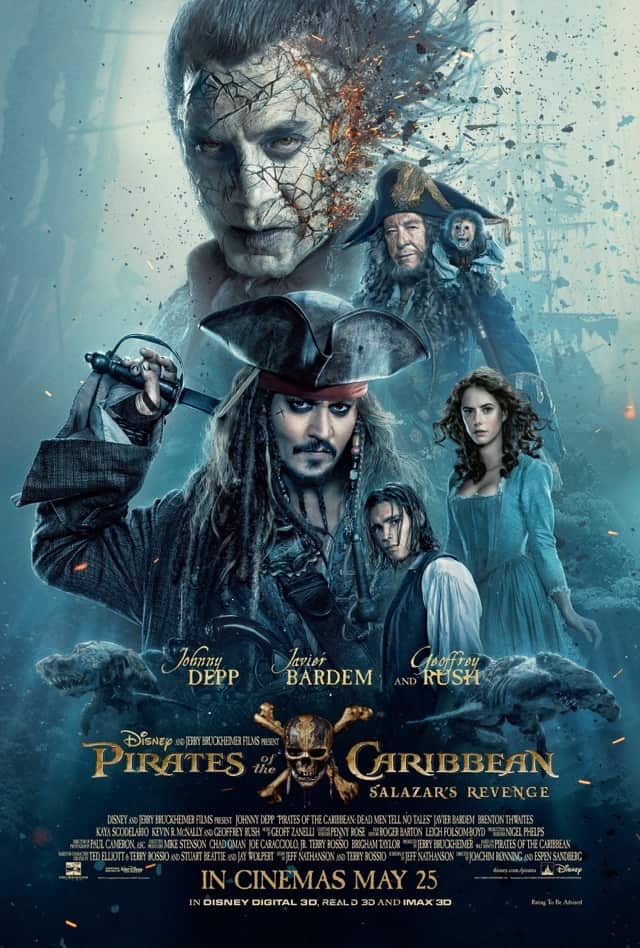 For the past decade or so, the Pirates Of The Caribbean franchise has been living, lumbering proof of Hollywood at its most excessive and profit-oriented. It’s hard not to look at the three films following the sublime Curse Of The Black Pearl as shameless money-making opportunities – the budgets grew bigger and the action sequences more extravagant, sure, but the plots also became more convoluted and forgettable.

One would be forgiven for assuming that Salazar’s Revenge, the fifth and purportedly final Pirates instalment, is every bit as bloated, clunky and (largely) free of artistic merit. Surprisingly, that’s not the case. While Salazar’s Revenge does suffer from some of the franchise’s most pervasive problems, it’s a fun, perfectly decent blockbuster that remembers to add some very welcome heart and soul back into its story and characters.

The film opens on Henry Turner (Thwaites), now a young man determined to free his dad Will (Bloom) from his cursed servitude as the ghost captain of The Flying Dutchman. Henry’s quest prompts him to seek the help of Captain Jack Sparrow (Depp) as he hunts for the Trident of Poseidon, the magical MacGuffin that can undo the many nautical curses plaguing the high seas. Along the way, Henry’s fate becomes entangled with that of astronomer extraordinaire Carina Smyth (Scodelario), who is the key to deciphering the map that points the true way to the Trident.

Matters are complicated, of course, by the film’s top-billed, Oscar-winning antagonists. Salazar (Bardem), a ghostly menace trapped in the moment of his grisly death, rises from the depths to exact his titular vengeance upon Captain Jack. He is helped (and occasionally hindered) by Hector Barbossa (Rush), whose complicated relationship with Jack – teetering as it always does on the knife-edge between friend and foe – has been the unmitigated highlight of even the worst films in the franchise.

That’s a lot of plot and character to work with, and Salazar’s Revenge doesn’t always succeed in tying all the threads together. Setting all the characters on an inevitable collision course takes ages. The sprawling action sequences too often seem to forget when to call it quits. Jeff Nathanson’s script, while sharper and more coherent than its predecessors, tends to get mired in laddish moments and gags that aren’t even that funny the first time round: from the pirates’ amusement with Carina declaring herself a ‘horologist’, to an awkward beachside wedding that’s as uncomfortable for audiences to watch as it must have been for the actors to shoot.

What the film gets right is its decision to return Captain Jack to supporting-character status. That’s not to say he doesn’t have plenty of screen-time. As he has done since 2003, the perennially half-drunk Jack shambles throughout the film, oozing his trademark insouciant charm as he tries to make his crew pay for the privilege of serving and saving him. But Jack is not called upon to carry the emotional weight of the film here, as he has been for the past few films – especially Stranger Tides, a peculiar misfire on almost all counts. Instead, he’s allowed to do what he does best: steal most of the scenes he sashays through.

As a result, the film makes a real effort to focus on its newcomers, and is all the better for it. Carina, in particular, is an intriguing creation. While clearly set up as a love interest for Henry, that’s not all she is: her hunt for the Trident is entirely her own, tied to a storyline that isn’t romantic in the least. Smart and determined (more so than all of the pirates she encounters), she fights or thinks her way out of tough spots and never lingers in the background, damsel-in-distressing. Her relationships with everyone she meets – from Henry to Jack and Barbossa – form the film’s emotional core, anchored by Scodelario’s fun, feisty performance.

That said, it’s Rush who remains the franchise’s ace in the hole. From dastardly villain to reluctant ally, Barbossa has enjoyed a character trajectory that can only be pulled off by an actor of Rush’s calibre. Thankfully, he’s given excellent material to work with in Salazar’s Revenge. There’s a surprising amount of heartbreak in Barbossa’s share of the story, and Rush sells it all beautifully. In just a look or a twist of his gnarled features, Rush communicates the soul of the man long ago buried beneath the swish and swagger of the pirate Barbossa became.

There’s no denying that the Pirates franchise has lost its way over the past decade. It tried desperately to expand the mythology of a one-and-done nautical escapade and missed the mark more often than not. Salazar’s Revenge should have been the final nail in the coffin. And yet, it’s defied the odds (and myriad delays) to be the most enjoyable Pirates outing since the very first. On top of lush seascapes and jaw-dropping oceanic rescues (including one that stretches to the very bottom of the sea), the film’s emotional stakes have been raised – successfully. If this is truly the last we’ll see of the characters we first met 14 years ago, it’s a good way to go out.

Summary: A flawed but refreshing – and, hopefully, final – return to the high seas.