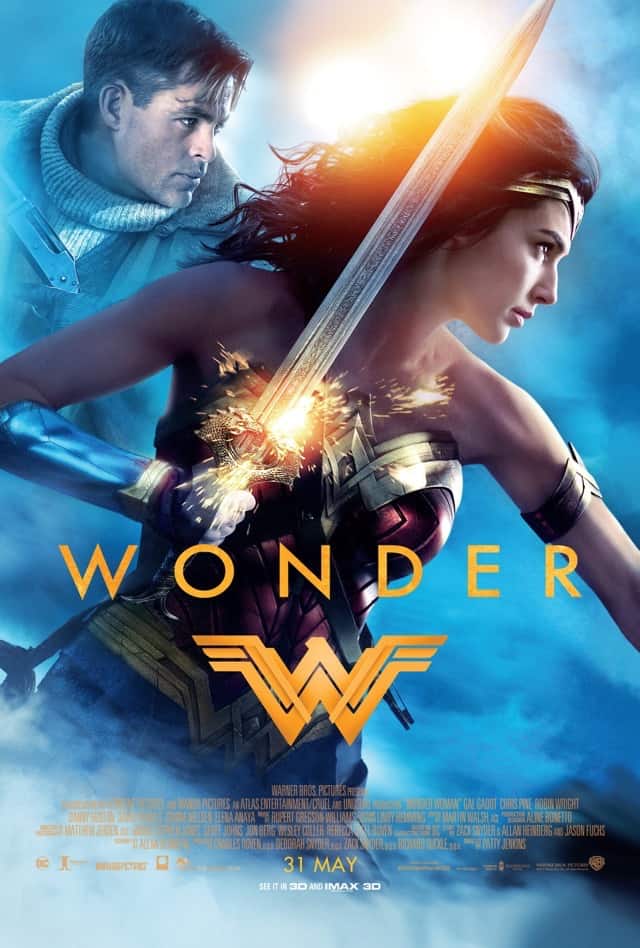 All the world’s been waiting for her, and at long last, here she is in a movie of her own. Diana Prince/Wonder Woman (Gadot) is a demigoddess raised by the mythical Amazons on the island of Themyscira. Diana’s mother Queen Hippolyta (Nielsen) wants to shield her from the outside world, while Diana’s aunt General Antiope (Wright) wants to train Diana into a warrior. When American pilot Captain Steve Trevor (Pine) crash-lands on Themyscira, Diana volunteers to escort him back to the outside world, against her mother’s wishes. It is the final days of World War I, and German General Erich Ludendorff (Huston) is working alongside treacherous chemist Dr. Maru/Dr. Poison (Anaya), devising deadly weapons to use in the war. Diana befriends Steve’s secretary Etta Candy (Davis), and goes to the front to end the war. Diana is accompanied by Steve’s ragtag band of operatives, including Sameer (Taghmaoui), Charlie (Bremner) and Chief (Brave Rock). However, the forces they face are beyond mere armies of men.

Wonder Woman made her first appearance in Sensation Comics in 1941, and a big screen solo outing for the superheroine is long overdue. After varied failed attempts to bring the character to the screen, DC has finally found success – and what a success this is. The DC Extended Universe has generally been greeted with scorn. Moviegoers heading into this movie can be roughly grouped into two categories: those who are eager to see this fail because it’s a DC film, and those who are cautiously optimistic. With Wonder Woman, director Patty Jenkins has crafted a movie that might stun detractors into silence. Working from a screenplay by Allan Heinberg (known in the comics sphere for Young Avengers and his Wonder Woman run), who rewrote earlier drafts by Jason Fuchs and Zack Snyder, Jenkins has delivered a worthy epic that does the iconic character great justice. The filmmakers demonstrate an innate understanding of what makes Wonder Woman tick, and eloquently articulate her motivations, laying out the events that shape her into the heroine she becomes.

Jenkins must have faced the dilemma of depicting an action heroine who’s all about peace, love and understanding: as the lyrics of the theme song go, “make a hawk a dove, stop a war with love”. On one hand, Diana stands for all that is good and pure, and on the other, she’s a bona fide badass who is formidable in battle. Wonder Woman navigates the quandary admirably, and gets surprisingly moving in the process. While the film doesn’t try to give a simple answer to why it’s in mankind’s nature to fight, it attempts to make sense of why conflict comes so naturally to us, and how someone from outside man’s world would process this. It’s also tonally assured: the scenes of war get the appropriate gravitas, but there is a healthy amount of fish-out-of-water comedy, though not so much as to take one out of it. Some took issue with Batman v Superman’s handling of philosophical issues, and Wonder Woman doesn’t get too bogged down with big questions as it serves up plenty of spectacle.

There’s a grandeur to the film, which takes us from the idyllic fantasy paradise of Themyscira to the gritty corpse-strewn battlefield of the Western Front. Aline Bonetto’s production design and Lindy Hemming’s costume design makes Themyscira a thoroughly-realised world, supplemented by location filming on the Italian coast. The statuesque Amazons are fantastical figures, yes, but their domain is immersive and believable. There is enough authenticity to the settings of London, Belgium and the Ottoman Empire, such that this works as a war movie. The action sequences are exciting and staged with finesse, the fight choreography incorporating Diana’s sword, shield, lasso and bracelets. They are just the right degree of showy, a dazzling blend of elegance and strength. When Wonder Woman climbs out of the trenches and charges brazenly through No Man’s Land, it’s wont to give viewers quite the buzz.

Gadot’s casting was met with considerable backlash, and if her turn in Batman v Superman made doubters eat their words, she’s back with a heaping second serving here. Gadot more than proves herself as the ideal embodiment of the superheroine. Diana starts out as an idealist, and Gadot parses the character’s status as an invincible naïf. Audiences at large are not as familiar with Wonder Woman’s back-story as they are the origin tales of Superman, Batman or Spider-Man, and it is told coherently and engagingly. Not only does Gadot truly come into her own as a leading lady in this film, but she looks absolutely fantastic doing it – in both the action sequences and the quiet dramatic moments.

In many comic book films, the romance tends to feel tacked on. This isn’t the case here. The strapping, roguish Steve Trevor is Diana’s primary link to man’s world, and the relationship between the two is crucial to the plot. Through Steve’s eyes, Diana sees both the good and the evil that man is capable of. Pine is charming as always, with a twinkle in his eye and never a hair out of place. It seems like a bit of a waste to cast him as Steve Trevor instead of Hal Jordan/Green Lantern, since Hal is pretty much Captain Kirk. Still, it’s great that Steve is drawn with some depth, instead of being the standard dashing but boring hero. Owing to the respect he shows Diana, he’s as good a role model as she is.

Davis’ bubbly Etta Candy is true to how the character is portrayed in the comics, and as the designated comic relief, she stays a safe distance from being annoying. While Steve’s band of merry men all exhibit stereotypical traits, they get enough development. Taghmaoui is suave and amusing, Bremner has fun playing the wild-eyed Scotsman but also brings out the trauma that mars the character, and Brave Rock is steadfast and a comforting presence as Chief. While Huston and Anaya play largely generic villains, they serve the plot well and chew just enough scenery.

There was a lot riding on this film, with the fear that if it failed, it would spell doom for any female-led comic book movies going forward, just as Catwoman and Elektra sounded the death knell all those years ago. Those fears should be allayed, as this is a grand, heartfelt and rousing film. Despite its 141-minute running time, Wonder Woman doesn’t feel bloated and is light on its feet. At once refreshing and reminiscent of classic wartime romance films, Wonder Woman is a giant leap forward for the DC Extended Universe.

Summary: A soaring, inspiring adventure centred by Gal Gadot’s assured star turn, Wonder Woman is the movie long-time fans of the iconic superheroine have been waiting for.