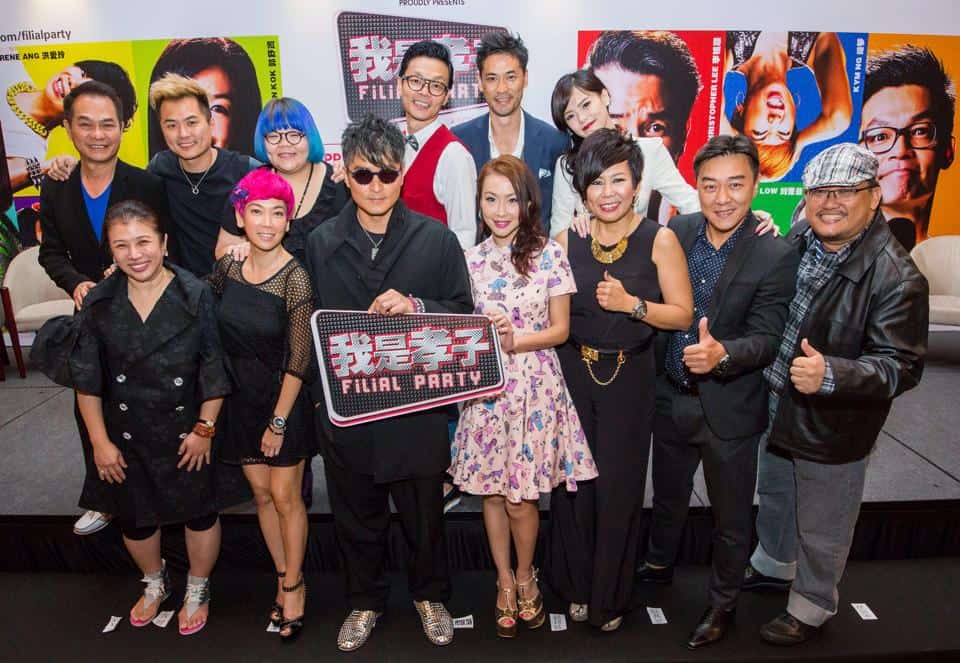 F*** was at Orchard Hotel on Tuesday, attending the press conference and round table interviews for Filial Party. The Singaporean film, starring an ensemble of faces regular Channel 8 viewers will doubtlessly find familiar, is being released in conjunction with Mother’s Day. In the film, Mark Lee plays Millionaire Liu, a producer and TV host who devises a television game show that will reward the most filial contestant with a $1 million cash prize. Christopher Lee, Ann Kok and Hayley Woo play the three finalists vying for the coveted prize money.

“I was able to fulfil a long-time dream of mine on this film: hitting Mark Lee,” Christopher Lee, in shades, tousled hair and silver studded shoes, said to much laughter. “Ever since I’ve entered the industry, I’ve always wanted to hit Mark Lee.” Despite this potentially disturbing glimpse into Christopher Lee’s psyche, it was amply clear that the cast got on like a house on fire.

Christopher’s significant other, currently pregnant with her first child, was on everyone’s minds, so much so that Mark Lee jokingly instated a “$300 fine” for the next person to mention “Fann Wong”. Christopher Lee said he eventually hopes to become a good friend to his child, still withholding the baby’s gender. “I think she looks cute when she’s pregnant,” he said rather sweetly about Fann.

Veteran actor Richard Low plays Christopher Lee’s onscreen dad, a lecherous, unfaithful cad. Christopher Lee insisted that Low is nothing like his character in real life. Low, who celebrates his 30th wedding anniversary this year, said he has never had any big arguments with his wife. Lee vouched that while having dinner with the couple, both Low and his wife spoke to each other very gently. Low sheepishly admitted that he was a little ashamed to face his wife after filming a scene in which his character hired a prostitute.

“I heard the girl gave up her citizenship,” Mark Lee teased. He had taken it on himself to play team leader during the press conference. “I had a good time making this film because they had to do the heavy lifting,” Mark Lee said referring to the rest of the cast. “They have parents, children, they have to strip, be in traffic accidents, I had a comparatively easy time of it.” On the topic of the brief tussle towards the film’s climax that Mark and Christopher’s characters share, Mark said “I don’t think there’s any contest between Christopher and I. He’s just that much stronger. If we were to get into a fight for real, Christopher would definitely win.”

“If I were betting on the fight between Christopher Lee and Mark Lee, I’d definitely put my money on Christopher,” Kym Ng affirmed. Ng sported hot pink hair, having dyed it blonde for the film. Ng, who is Christopher Lee’s onscreen wife in Filial Party, said “I was anticipating playing Christopher’s wife but I was afraid that we wouldn’t be sufficiently familiar with each other, having not worked together before. But we got along very well, even the scenes in which we had to share a bed, there wasn’t any awkwardness about it.”

Getai performer Liu Ling Ling plays wife to Richard Low’s character, mother to Christopher Lee’s and mother-in-law to Kym Ng’s. “His character in this film is such a dirty old man, but Richard was a gentleman in real life,” she said. Last year, at age 50, Liu gave birth to her first child. “My child in real life is eight months old, but in this movie, Christopher plays my son!” she said with a laugh.

Ann Kok is no stranger to the small screen, but Filial Party marks her feature film debut. “It was a very happy experience making my first movie,” she said. In a crucial scene, Millionaire Liu stages a traffic accident, forcing Kok’s character to make a difficult choice: saving her elderly mother or her young son. When asked who she would save if it came down to her significant other or her mother, Kok replied “If I answer this question, I won’t be able to find a husband,” leading Mark Lee to point out that she had indeed answered the question anyway. For what it’s worth, she did confirm that she is still single.

Japanese-American actor Jimmy Taenaka plays the supporting role of Ann Kok’s onscreen husband in Filial Party. Not proficient in the Chinese language, Taenaka attempted a sentence using the only Mandarin phrase he knew, and ended up saying “Ann Kok tastes great,” which naturally got him quite the ribbing from Mark Lee. On the difference between working in Singapore and in Hollywood, Taenaka said “I think there are bigger egos in Hollywood and everybody here is very nice, the cast and crew.” Director Boris Boo shared that Taenaka had come up with a detailed backstory and character history to prepare for his relatively minor role, a method of preparation that isn’t the standard practice in Singapore.

Irene Ang plays the mother of Hayley Woo’s character and the wife of Guo Liang’s. The multi-hyphenate actress joked that she had been “promoted” to playing mothers in films such as Ah Boys to Men and TV shows like Spouse for House. In Filial Party, Ang’s character suffers a heart attack and is loaded into an ambulance. This was the first such scene she had filmed and some crew members, taking it to be a bad omen, offered her a red packet to ward off the supposed bad luck. She brought her mother to see her in the Ah Boys to Men musical and it was the first time her mother had seen a stage show. “I’ve found that humour always works when talking to parents. I try to keep it light because when we discuss serious issues, we tend to get into arguments,” Ang said. Ang is not a mother in real life, but said she views the 43 artistes managed by her company Fly Entertainment as her own “children”.

To show their devotion to their daughter, both Irene Ang and Guo Liang’s characters dressed in garish K-pop attire. “I had the shock of my life when I was told that I had to wear these outfits,” Guo said. “I could identify with the idea of being the father of a teenager because my son is 15, but all the rest, especially these K-pop outfits, that was alien to me.” In the film, it appears that Guo’s character might be having an affair with a younger woman. “I had a scene where I was sneaking off into a hotel and it seemed as if I was stripping and getting into bed. The script was ambiguous on the specifics of this.” He was also bewildered by the lack of direction given to him, Boo evading any questions he had about the scene prior to shooting it.

Filial Party marks the second movie in Hayley Woo’s résumé. “It’s a great to honour to work with actors that I’ve seen in TV shows and never thought that I’d have the opportunity to work with,” she said. In the film, her character is something of a brat who is completely doted on by her parents. “I feel that my generation is more self-centred and that many young Singaporeans treat their parents as if they were their maids,” she commented. Ang added that teenagers seem more entitled these days. “Mark Lee always mangles my name,” she lamented. Lee went on to call her “Hali-copter” and “Hali-leg”.

Director Boris Boo said the project’s inception happened during a brainstorming session when producer Lim Teck suggested he do a film along the lines of Money No Enough, about the pursuit of wealth in Singapore society. “I can’t outdo my master,” Boo conceded, referring to mentor Jack Neo. “I didn’t want to do a typical Singaporean movie where the focus is on just one family, so I suggested ‘why don’t we do a (film about a) game show?’” He described his original idea as a more extreme Hunger Games-esque take, but scaled it down due to budgetary concerns. Boo admitted that he made full use of the TV show-centric premise to pile on the product placement, saying his instructions were “go and find all the sponsors you can, whatever you find, let’s put it in.” He claimed that it would be unnatural for a TV show to have no product placement but admitted that Filial Party probably still is too “blatant” in this regard.

“My primary aim for making this movie is that audiences will make a call to their parents or have a meal with them after watching the movie,” Boo said, echoing what many of his cast members had said over the course of the press conference about filial piety being a day-to-day thing expressed mostly through small gestures.