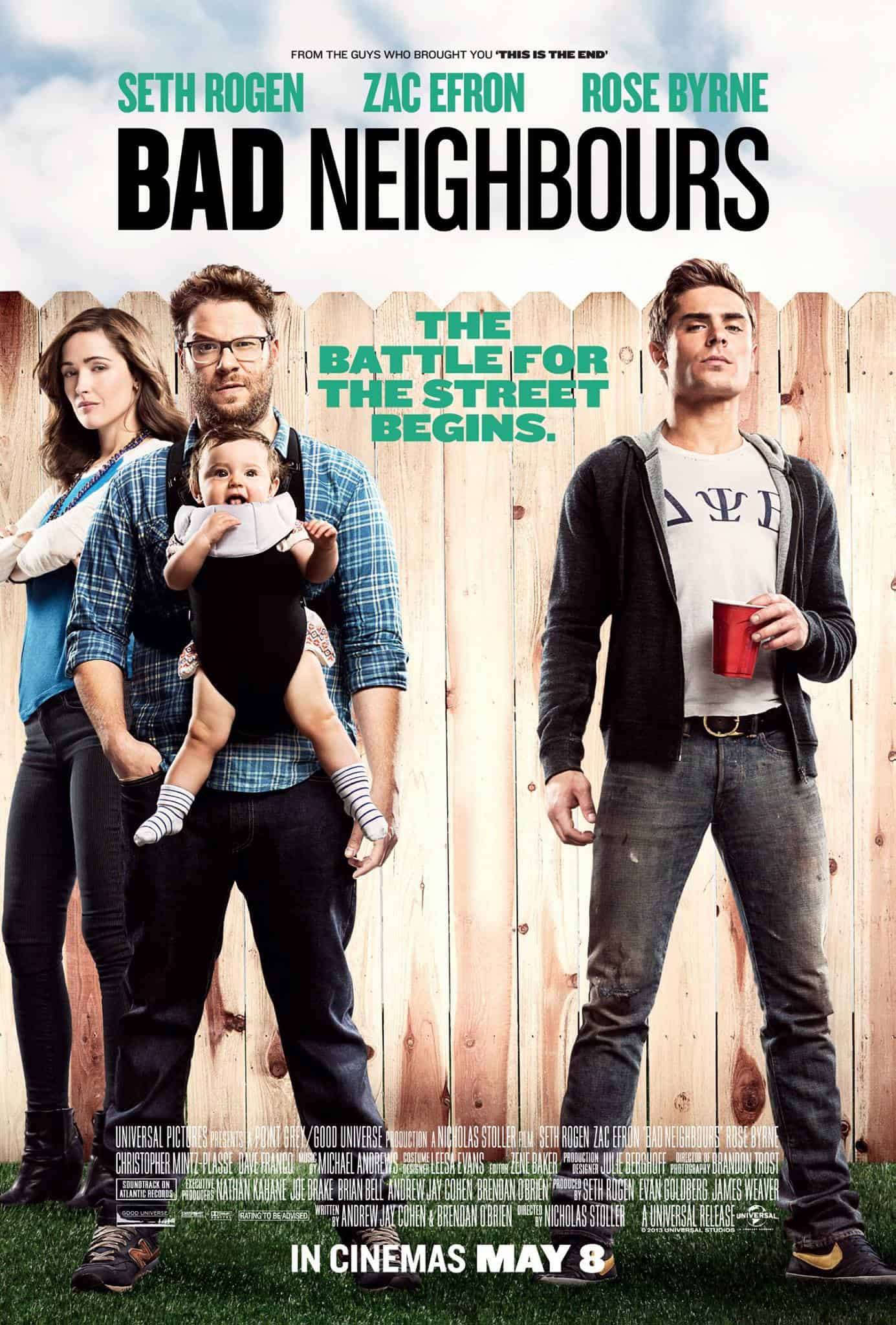 You can’t choose your family, and it turns out you can’t choose your neighbours either – except perhaps if you can buy out the whole row of houses. In this comedy, new parents Mac (Rogen) and Kelly (Byrne) don’t have that luxury. With an infant on their hands, they’re horrified when the Delta Psi Beta fraternity moves into the house next door, since it means endless loud parties and no peace for them or their baby girl. Mac and Kelly initially try to keep things civil with fraternity president Teddy (Efron), but things soon get out of hand as the couple and the frat boys repeatedly clash after deciding that the street isn’t big enough for both their groups. 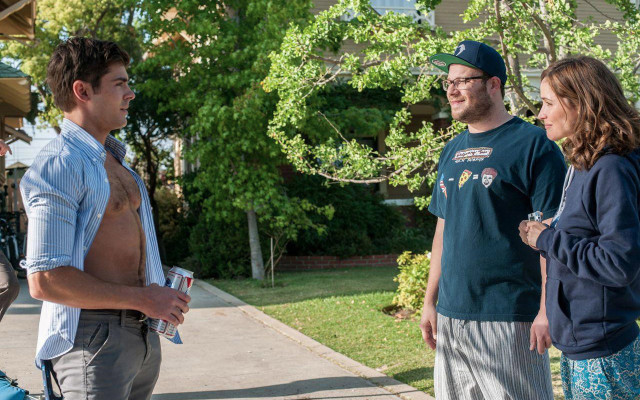 The film is titled Neighbors but is being released as Bad Neighbours in the UK, Australia and other territories, presumably to avoid confusion with the long-running soap opera Neighbours. Director Nicholas Stoller is an oft-collaborator of Judd Apatow, having directed R-rated comedies Forgetting Sarah Marshall, its spin-off Get Him To The Greek and The Five-Year Engagement. As can be expected, there is no shortage of wanton ribaldry on display in Bad Neighbours, every scene featuring large quantities of profanity, drugs, sex and nudity in any number of combinations. If lowbrow, American Pie-esque humour isn’t your cup of tea (or bong of weed, rather), it’s best to give this a wide berth. But if you’ve got no problem with lactation gags and 3D-printed dildos, this is the flick for you. 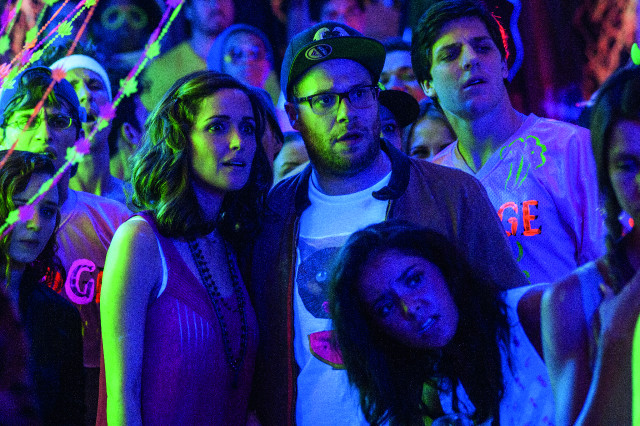 The problem with many films of this genre is that the characters can be pretty detestable and it’s hard to enjoy their antics when you just can’t relate to them or root for them. By any standards, the characters in Bad Neighbours are not good people: Mac and Kelly are irresponsible, hard-partying parents and Teddy and his frat brothers are inconsiderate, lunk-headed jerks. Teddy even has his frat symbol tattooed on his bicep. However, they end up pretty likeable and somehow, it’s hard to stay mad at these guys and it becomes surprisingly easy to go along with the over-the-top gags and the sophomoric silliness thanks to the performances the cast turn in. 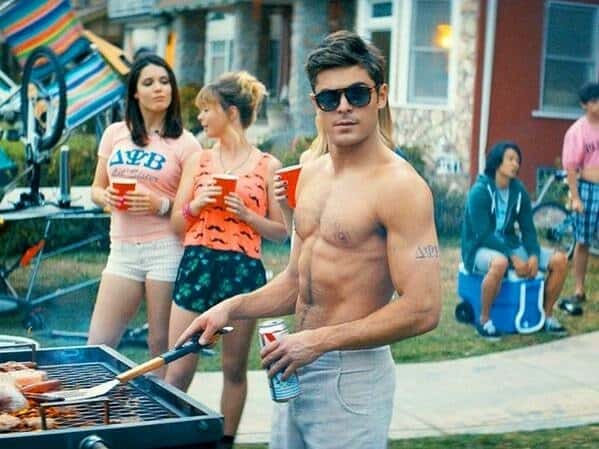 Rogen essentially plays himself once again – a schlubby, pot-smoking “hurr hurr” type – but he’s entertaining and funny while he’s at it and he and Efron throw themselves into their crazy feud. This is far more Efron’s wheelhouse than dramas like At Any Price and Charlie St. Cloud. He gets to goof off and show off that MTV Movie Award-winning physique, charming but never repulsively smug. Once again, Byrne more than proves her versatility, holding her own opposite (and often stealing the show from) Efron and Rogen, gamely partaking in the juvenile hijinks without looking like she’d rather not be there. Dave Franco makes for an excellent foil to Efron as Teddy’s wingman Pete, their friendship/rivalry given surprising depth. 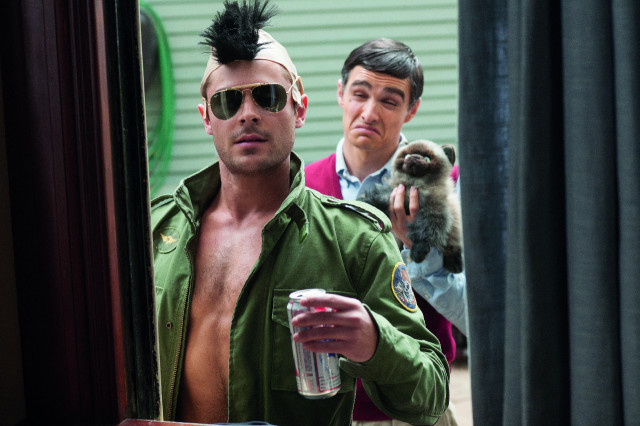 Bad Neighbours unfolds in an episodic, somewhat predictable fashion and is far from a sophisticated affair but it manages to be amusing and engaging and some moviegoers will probably end up enjoying this one in spite of themselves. There’s a scene early in the movie in which Mac and Teddy discuss their favourite cinematic versions of Batman, Mac favouring Michael Keaton with Teddy preferring Christian Bale. It’s a moderately clever way of demonstrating a generational gap and the film tackles the worries of moving on from college to a job and a family without becoming sentimental goop. And hey, when “warring neighbours” comedies like Deck The Halls exist, you could certainly do worse than hanging out with Rogen, Efron, Byrne and co. 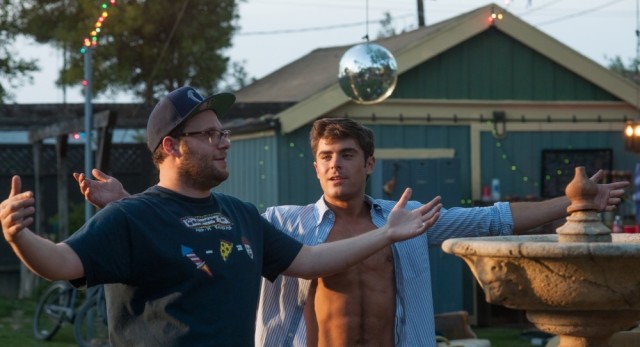 Summary: These bad neighbours make for a pretty good time!