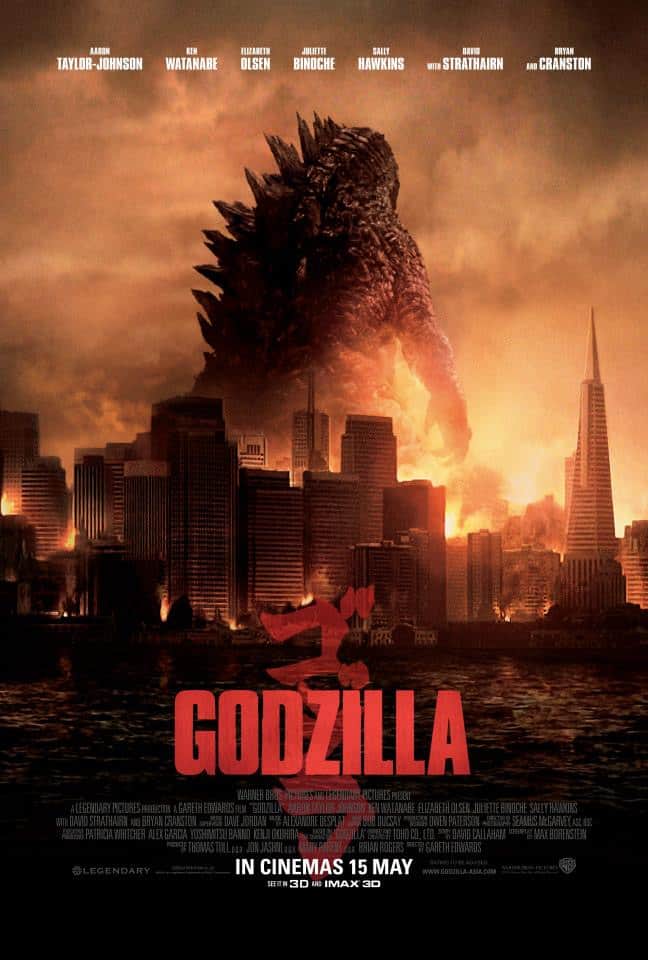 It has been ten years since Godzilla: Final Wars, and the King of Monsters has returned to reclaim his rubble-built throne in this film. Lt. Ford Brody (Taylor-Johnson) is an explosive ordnance disposal technician, who has a young son (Carlson Bode) with his wife, nurse Elle (Olsen).  As a child, Ford lived in Japan, where his parents Joe (Cranston) and Sandy (Binoche) were supervisors at a nuclear power plant. A catastrophic incident in which the power plant was attacked by a Massive Unidentified Terrestrial Object, or MUTO, still haunts Ford. 15 years later, the MUTO has re-emerged and as the military scrambles to fight it, scientist Dr. Ichiro Serizawa (Watanabe) believes only one thing can truly stop it: the powerful ancient creature known as Godzilla – but not without causing its share of damage.

The release of this Godzilla film marks Big G’s 60th anniversary; the creature has appeared in a staggering 30 official films (including this one) since 1954. The original film was a serious-minded one but over time, it’s become harder and harder to take the creation seriously, the iconic kaiju sometimes regarded as camp and mostly viewed as a friendly mascot (look for “Godzilla happy dance” on YouTube). Director Gareth Edwards, who became an overnight sensation with his micro-budget creature feature Monsters in 2010, has delivered an incarnation of the monster that can indeed be taken seriously. With Godzilla, the creature’s second proper Hollywood outing, Edwards has crafted an effective disaster movie which possesses admirable scope and scale. In an age where moviegoers are difficult to impress, this is pretty darn impressive. The sheer amount of visual effects work and the number of major action set-pieces in this one film is hard to wrap one’s head around and yet, it’s not overwhelming or repetitive. 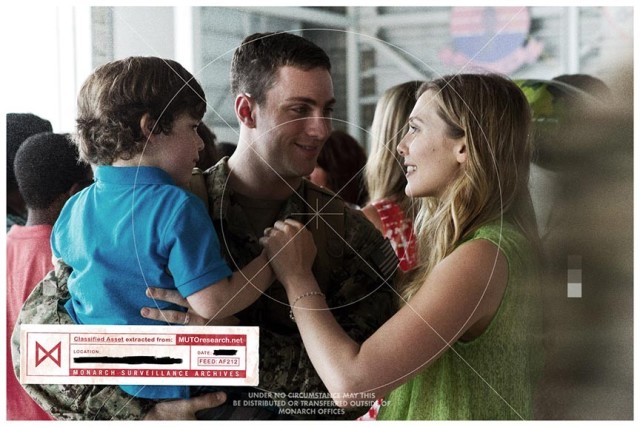 We’ll be upfront about it: the plot isn’t Godzilla’s strongest point. The protagonist is little more than “the soldier” and his wife is merely “the nurse”. There are more than a handful of contrivances which repeatedly position Ford Brody in the middle of the action and he must be followed around by the same guardian angel who was looking out for Brad Pitt’s Gerry Lane in World War Z, seeing how he survives multiple catastrophes with nary a scratch. Seeing the future Scarlet Witch and Quicksilver as a married couple might gross some of the geekier audience members out a tad. However, there are definitely things about the narrative that work: it’s couched as a conspiracy thriller of sorts and the downright terrific opening credits are presented as a montage of Godzilla’s appearances throughout history, which the relevant authorities have tried to conceal from the public. Even though the military plays a pivotal role, Godzilla does not come off as jingoistic.

In addition to essentially being a scaled-up take on Monsters, Godzilla also takes a handful of pages from Steven Spielberg’s playbook. The late reveal of the titular monster (it’s approximately an hour in before Godzilla shows up proper) echoes Jaws, as does the surname “Brody”. The post-9/11 disaster movie feel is reminiscent of War of the Worlds. The daddy issues are present in many of Spielberg’s works. The father who grows obsessed with an outré subject is from Close Encounters of the Third Kind. And of course, there’s the Jurassic Park connection, not just with the giant creatures running amok but also in scenes like a helicopter approaching a jungle. But while Roland Emmerich’s Godzilla was an unsuccessful Jurassic Park rip-off, the above influences enrich Edwards’ work and do not stick out as being “stolen”.

As of late, we’ve heard complaints of blockbusters being stuffed with too much wanton destruction, to the extent that scenes of major cities being levelled no longer carry any weight. Here, there is calamity with consequence; Edwards striking a difficult balance between the visceral thrill of seeing giant monsters punch each other and the solemnity of witnessing cities laid to waste and countless lives destroyed. Japanese fans have complained that Godzilla appears to have become the Burger King of all Monsters, having packed on the tons. Yes, Godzilla does seem a little pudgier here, but his presence is no less awe-inspiring and in spite of the extra weight and relatively small head, nothing seems very “off” about his look here. The character animation on Godzilla and his MUTO opponents is excellent; the creatures end up being great “actors” thanks to the emotion the visual effects artists imbue their facial expressions with. There’s also just enough of a nod in their movements to the heyday of men in rubber suits shoving each other about a model city without coming off as silly. 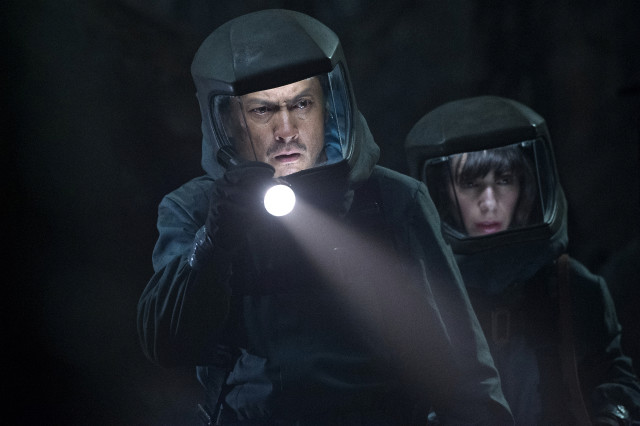 Despite the cast not being the main draw, nobody in Godzilla is terrible. Taylor-Johnson borders on wooden but still brings a humanity to Brody, though at 23, he does seem a little young to be the father of a five-year-old. We do wish Elizabeth Olsen had more to do; she isn’t in the thick of the action for most of the film. Bryan Cranston is good as the troubled, slightly manic dad, though he isn’t in the film as much as the trailers would lead you to believe, playing more of a supporting role. Ken Watanabe is perfectly respectable, but he does constantly look worried/constipated. Sally Hawkins, in her first big-budget blockbuster, doesn’t have much to do either as his assistant. David Strathairn is the standard military type here but thankfully, isn’t characterized as ridiculously hard-nosed.

While the “human element” might be lacking somewhat, there is more than enough in Godzilla to get emotionally invested in and thanks to Edwards’ vision, this does stand above the loud, noisy blockbuster pack. The high-altitude low-opening parachute jump scene towards the film’s climax is gorgeously shot by cinematographer Seamus McGarvey, a moment of calm in the midst of the storm. For the most part though, the 3D effects are not sufficiently noticeable. The spectacle is massive but not numbing and the film takes itself just seriously enough without being droll and depressing. It is respectful of the original 1954 film while offering enough to make modern jaded audiences sit up and take notice. And as an added bonus, at no point does Matthew Broderick remark “that’s a lot of fish”.

Summary: While there isn’t as much to the human characters as there could’ve been, Gareth Edwards serves up a spectacular royal rumble fit for the king.