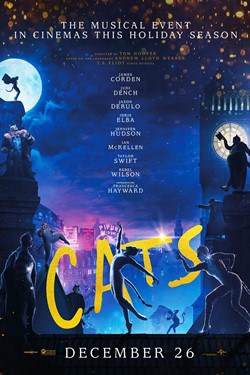 The Low-Down: Andrew Lloyd Webber’s stage musical adaptation of Old Possum’s Book of Practical Cats, a compilation of children’s poems by T.S. Eliot, became an unlikely sensation. The show had long runs on both the West End and Broadway, and now comes to the screen in a way that can be most succinctly described as a mistake. Almost all of it is a mistake.

The Story: Calling it a “story” is being generous, because Cats is not really meant to have a coherent narrative. The premise is that the Jellicle Cats (say “dear little cats” in a low voice, with a thick posh accent) gather for the Jellicle Ball, a ceremony wherein they sing a song about themselves and one of their number is chosen by the leader Old Deuteronomy (Judi Dench) to ascend to the Heaviside Layer, after which they will be reborn.

The movie adds on a subplot about Macavity (Idris Elba), who kidnaps some of the other cats to increase his chances of being the Jellicle Choice.

The Good: Believe it or not, there are good things about Cats. Most of the changes it makes to the stage musical are baffling and highly counterproductive. However, making Mr Mistoffelees (Laurie Davidson) the magic cat a soft boy with anxiety works for the story, even if the kinda-romantic subplot between him and Victoria (Francesca Hayward) feels forced.

Robbie Fairchild is good as Munkustrap, the de facto narrator – he was a principal dancer at the New York City Ballet who then became a Broadway star. Fairchild is one of the few performers in the show who sounds like they’ve undergone any actual musical theatre training.

Steven McRae, a principal dancer with London’s Royal Ballet who also dances tap, is a standout as Skimbleshanks the Railway Cat.

Dame Judi Dench can do no wrong and is weirdly dignified even when reclining somewhat seductively in a cat bed. Old Deuteronomy has always been played by a man, but the gender-flip works well. The few moments in the film that come close to being emotional are courtesy of Dench.

The choreography by Andy Blankenbuehler of Hamilton fame, building off the original choreography by Gillian Lynne, would have looked great if it were danced by actual humans and not the hybrid beasts we do get. Similarly, Hayward, a principal dancer with the Royal Ballet at Covent Garden, would have been mesmerising if it were her and not a strange fur-covered CGI approximation of her that were dancing the role.

The Not-So-Good: Everything that makes Cats work as a theatrical production is rendered utterly null here. Even as theatre, Cats is divisive and widely mocked. However, it is a showcase of incredible physicality and athleticism and is, in many ways, purely experiential. You must be there to get it or even remotely think it works.

Some musicals are easier to translate to the screen than others – the ones best-suited to this transition are typically plot-heavy, because things are easier to follow in movie form. Cats never had any plot to begin with, so making a film adaptation is about as futile as herding, well, you know.

There was a 1998 filmed version of the stage show, which featured what pretty much are the standard John Napier costumes and scenic design one might see in a production of Cats. This movie has decided not to go with costumes at all.

It has decided to go with truly horrifying cat-human hybrid monsters. 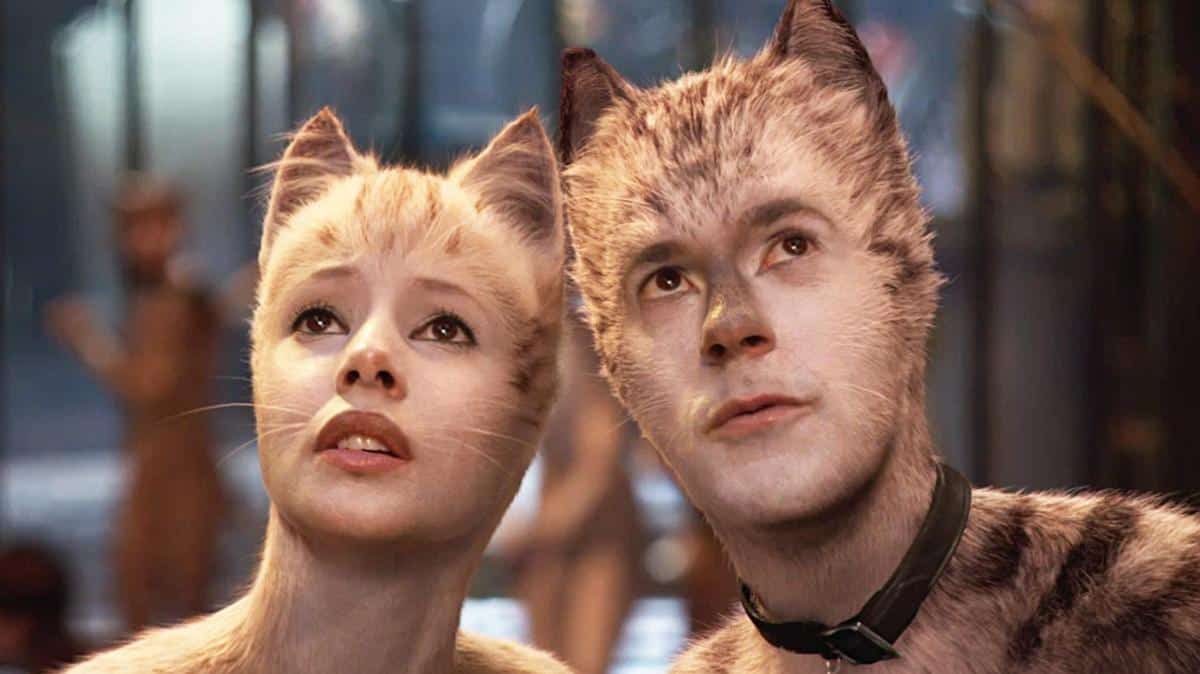 It should go without saying, but human and cat physiology differ in many ways. However, human physiology is required to dance. As such, some aspects of the characters are very human-like, while others are cat-like. To quote another Andrew Lloyd Webber musical, “those who have seen your face draw back in fear”. It’s a face covered in digital fur, with cat ears sat atop it and whiskers above the mouth, yet the noses, lips and teeth are very human. One never quite gets over it. 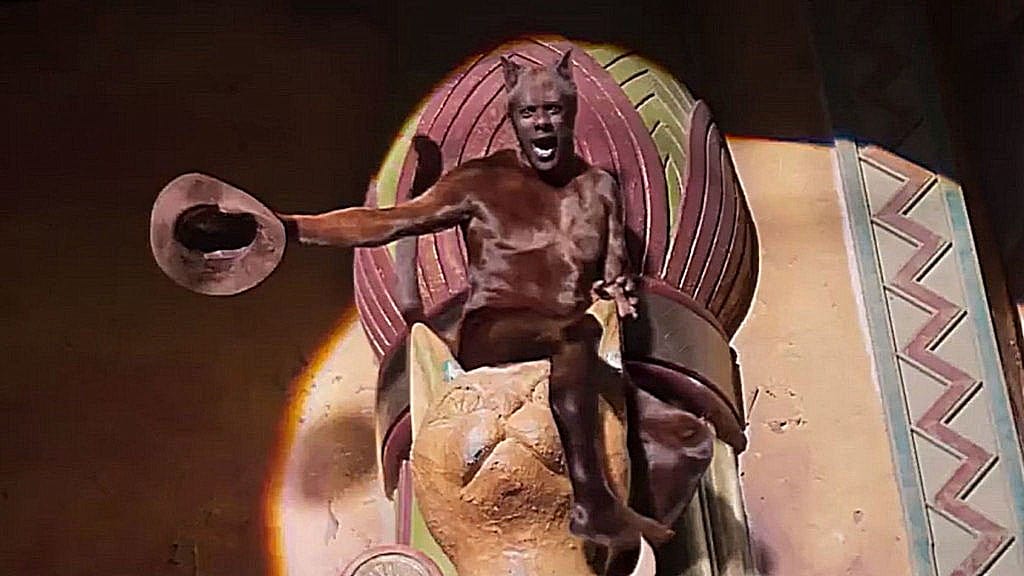 You can see a performer in makeup and a leotard and accept that they’re playing a cat in the context of theatre, but this “realistic” approach almost twists the visual cortex and medial prefrontal cortex, the parts of the brain that recognise something as human. The scale is also wildly inconsistent, changing not just between scenes, but between shots. In some moments, the cats are the height of trash cans, and in others, three of them fit in a dumbwaiter.

The instrumentation is baffling, and a lot of it seems to be midi, when a movie has access to an orchestra full of real instruments since there aren’t the space limitations of an orchestra pit (or in the case of most productions of Cats, a little alcove hidden behind the set). A flailing effort is made to give some of the songs more of a pop sound, with snyth drums. 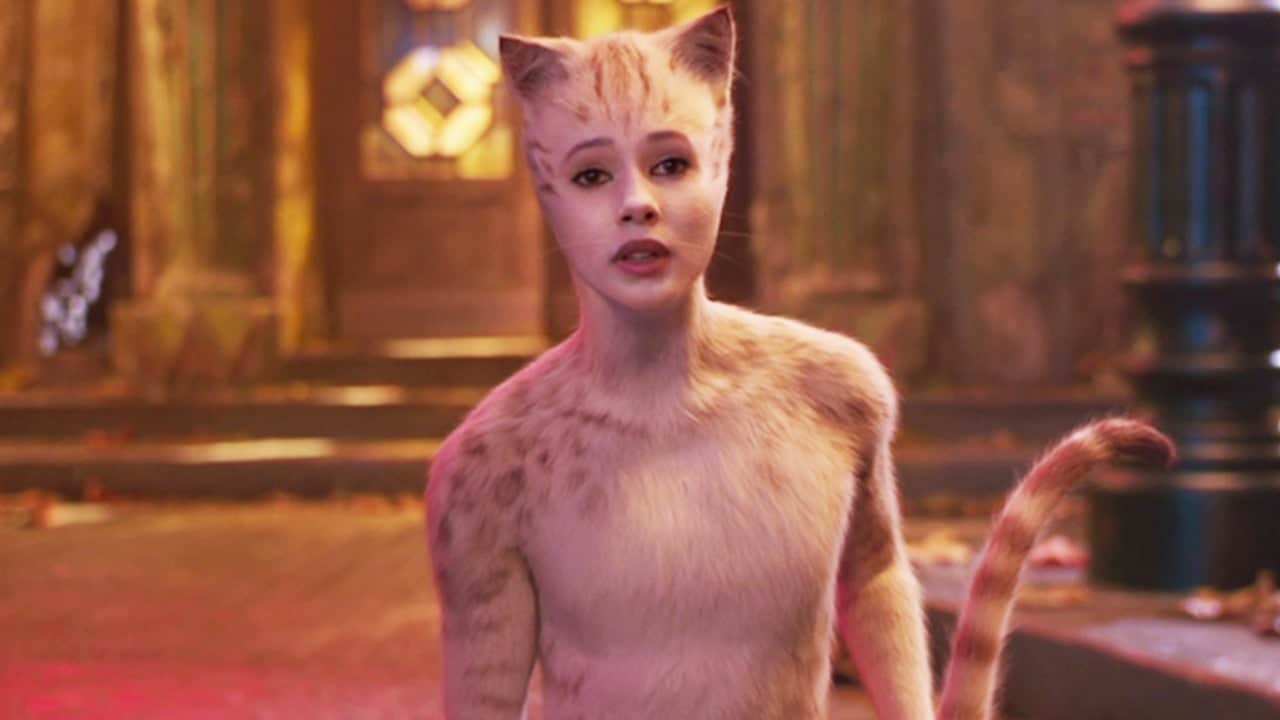 There is a new song written by Lloyd Webber, with lyrics by Swift, called “Beautiful Ghosts”. “If you can’t get T.S. Eliot, get T.S.,” Swift (jokingly?) declared in a behind-the-scenes promo spot with all the hubris of a White Star Line official saying the Titanic doesn’t need that many lifeboats. “Beautiful Ghosts” has some awful lyrics (including rhyming “wanted” with “wanted”) and is the movie’s featured ballad, but is performed by Hayward, who is not primarily a singer and struggles vocally.

Why did anyone say yes to this: The cast is mostly awful. James Corden and Rebel Wilson are annoying, but you knew this already. Both Bustopher Jones and Jennyanydots are silly characters who should be endearing but are rendered irritating by performers that many audiences are already predisposed to disliking.

Jason Derulo is an embarrassingly bad Rum Tum Tugger, unable to enunciate any of the lyrics and never exuding the irrepressible rock star charisma demanded of the character. He makes the sexiest character in the show decidedly unsexy. Derulo complained about his penis being digitally removed, which a) were they all filming this naked? And b) that’s the least of his concerns, really.

It pains us to say that Jennifer Hudson completely butchers “Memory”, the one song from this most people know. She goes for the Anne-Hathaway-in- Les–Misérables-style crying delivery, complete with mucus. It results in a screechy, sometimes-unintelligible delivery that wants to be emotional, but cannot because it is sung by an unholy human-cat monster.

Taylor Swift is awful – she doesn’t have the voice to sing musical theatre, and she adds a “sexy” affectation on top so it sounds even shallower than usual. She also puts on a bad posh English accent. Of everyone in this, she seems the most pleased with herself, the most convinced she is doing great.

Idris Elba’s villainous Macavity is never intimidating because, again, this is all ridiculous.

Sir Ian McKellen laps milk out of a bowl and says “meow meow meow” and comes away with his dignity way less intact than Dench’s.

Why this movie broke critics: The characters apparently have no assholes, so critics have been quick to tear Cats a new one. To quote yet another Lloyd Webber musical, they’re “Falling over themselves to get all of the misery right”. The thing is, yes, bad movies exist, but bad movies made by major studios that are bad in this many ways are a rarity. Many, many people had to approve the bad decisions that comprise Cats. Hundreds of people worked on this – visual effects artists were working on the movie even after it had released, with a version with “improved visual effects” made available to theatres a week into its US release – polishing the kitty litter, if you will.

In a world of franchises, of focus groups and test audiences, of movies needing to play to four quadrants and in every market around the world, a fiasco on this scale is a precious, beautiful, horrendous thing to behold. It is viscerally distressing – you feel it in your very bones. Something this bad is typically made by bumbling would-be auteurs with delusions of grandeur: your Tommy Wiseaus, your James Nguyens, your Neil Breens. Not Oscar-winning directors. 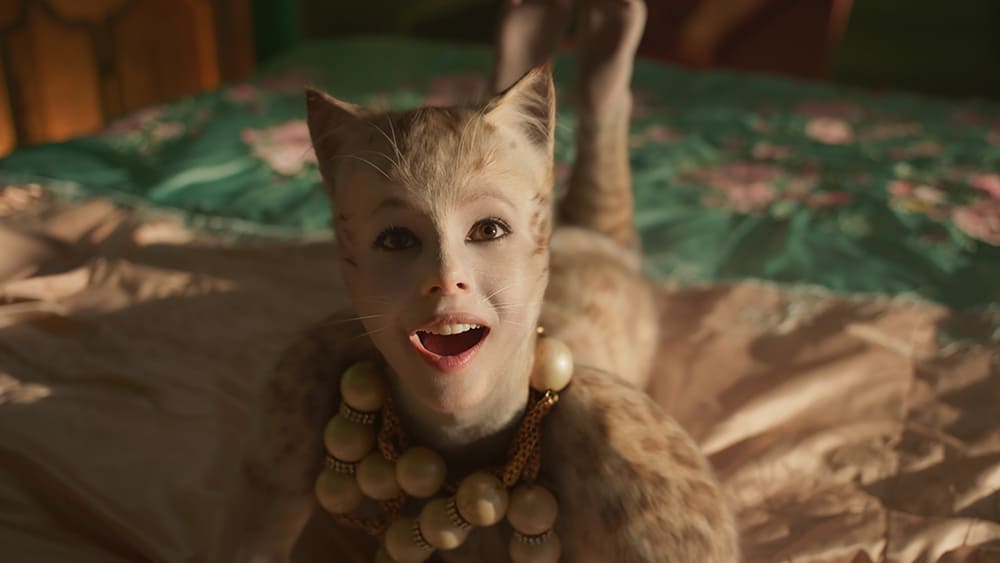 Cats has elicited the most entertaining reviews in a long time because it is awful in ways that movies just usually aren’t.

Recommended? What do you think?