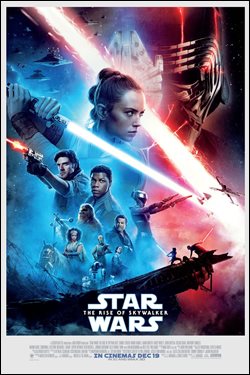 (The following review is spoiler-free)

The Low-Down: 42 years after the original Star Wars movie redefined cinema and started an enduring worldwide phenomenon, J.J. Abrams rings the curtain down on the Skywalker Saga with this film. While this certainly will not be the last piece of Star Wars media or indeed the last Star Wars movie ever, it’s still momentous that this marks the conclusion of the overarching core story of a galaxy far, far away.

The Story: Rey (Daisy Ridley), Poe Dameron (Oscar Isaac) and Finn (John Boyega), the heroes of the Resistance, are flung together for a high-stakes mission with the fate of the galaxy hanging in the balance, as it always seems to. Under the leadership of General Leia Organa (Carrie Fisher), the Resistance continues its fight against the First Order, led by her son, Supreme Leader Kylo Ren (Adam Driver). The resurgence of the ancient evil known as the Sith, locked in a never-ending conflict with the Jedi, unearths long-buried secrets as foes and allies both old and new are drawn into the fray. Rey’s struggle to find her place in the galaxy and Kylo Ren’s own long-standing inner conflict take both characters to places they never imagined they would go.

The Good: You know the Aesop’s Fable about the man, the young boy and the donkey? The one about how you can’t please everyone? One imagines director/co-writer J.J. Abrams as the man in that story. There is no denying that making The Rise of Skywalker was a daunting undertaking, overwhelming in breadth (if perhaps not depth) as a story that must function as the conclusion to not just one trilogy, but three. Taking this into consideration, there is a lot in this film to enjoy.

From the word ‘go’, The Rise of Skywalker is unrelenting, and it is this propulsive kinetic energy that keeps the movie going and going and going, making its 142-minute runtime zip by. Our characters jump from set-piece to set-piece, planet to planet, taking the audience along with them. There are several involving action sequences and the lightsaber battle between Rey and Kylo Ren on a barge in a roiling sea is among the best in the whole series.

Rey, Finn and Poe spent most of The Force Awakens and The Last Jedi apart, and The Rise of Skywalker makes it a point to have these three characters share multiple scenes. We see how each of these characters has grown and evolved and how the events of the past two films have shaped them. The interplay between them, especially between Finn and Poe, is often entertaining. The resolution of the struggle between Rey and Kylo Ren will not please everyone, but there is an elegance in its execution, and it winds up being satisfying while also being unsatisfying, which seems like the intention.

There is a palpa…ble affection for the movies that came before, and as a result one can sense how hard Abrams, co-writer Chris Terrio and crew were trying to create something that honours the films of the past while also not directly contradicting what has been established earlier, which is easier said than done. This is, if nothing else, a big “points for trying” scenario.

The Not-So-Good: The aforementioned Aesop’s Fable ends with the man and his son, carrying the donkey suspended by a pole on their shoulders, falling off a bridge into the river below and drowning. It sometimes feels like The Rise of Skywalker is doing just this. In nostalgia-driven franchises, fans are especially wary of “fan-service” – moments geared to elicit a positive reaction simply by reminding said fans of something they like. The Rise of Skywalker is stuffed with these moments. As a Star Wars fan, this reviewer did enjoy many of them, but after a while, it can get a bit tiresome when one realises this might be getting in the way of the storytelling. It’s like eating dessert for dinner: it’s fun at first, but by the end it’s too much of a good thing.

Much was made about how The Rise of Skywalker would apparently ‘retcon’ the events of The Last Jedi. While on the surface it seems like nothing here contradicts the events and the revelations of that film, one can tell that the vocal backlash against it did affect this movie – one would argue negatively. For all The Last Jedi’s perceived flaws, it was at the very least interesting. It was challenging in the way The Rise of Skywalker never is. Whatever was interesting about The Last Jedi feels flattened here.

Perhaps The Rise of Skywalker just doesn’t need to be challenging and people actually prefer it this way, but as the Skywalker Saga bounds towards the finish line, it feels like narratively, the series as a whole has taken a step backwards. The film was originally set to be directed by Colin Trevorrow, and Trevorrow still receives a screenwriting credit alongside Derek Connolly, Abrams and Terrio. Perhaps it was in the reworking of Trevorrow and Connolly’s original script that things got messy.

The breakneck pacing means that the movie is never boring, but there sometimes is the sense that it serves to paper over the cracks and stop audiences from pausing to look around them. The film’s haste also means that several important revelations and developments just whiz by without a chance to meaningfully explore them.

One last look at my friends: There is a sentimentality to The Rise of Skywalker, but it can be argued that the stories that have endured through the ages are often sentimental. Much of that sentimentality arises from seeing familiar faces, including C-3PO (Anthony Daniels) and Lando Calrissian (Billy Dee Williams), on new adventures that contextualise their relationships to the other characters. The two main new characters introduced here, the warrior Jannah (Naomi Ackie) and the helmeted spice runner Zorii Bliss (Keri Russell), both feel very Star Wars-y.

Considering how poorly a section of Star Wars fans have conducted themselves and how they have expressed their vitriol over certain instalments of the series and made hating something a core part of their personality, there is a comfort in seeing the characters embrace and express their affection for each other. Many elements of The Rise of Skywalker might seem overly engineered, but the positivity and the message of people uniting to defend what they hold dear is sincere.

The Force is strong in my family: The film’s greatest accomplishment is in bringing Carrie Fisher’s Leia to the screen one last time. Through an ingenious and nigh-seamless combination of unused footage from The Force Awakens, body doubles, compositing and possibly a soundalike voice actor, the late Fisher delivers a stirring, dignified and supremely moving final performance. This is, after all, the conclusion to the Skywalker saga and this movie does place the family, the surviving members of whom being Leia and Kylo Ren, front and centre. There is a reverence which makes The Rise of Skywalker sometimes trip over itself, but the Skywalkers are given their due and then some here.

Recommended? Yes, but somewhat cautiously. The Rise of Skywalker has myriad flaws, but it closes out the nine-film cycle in grand fashion. In straining to please fans, the film will probably end up divisive, just in a different way from The Last Jedi. Still, there is plenty for long-time fans to enjoy.