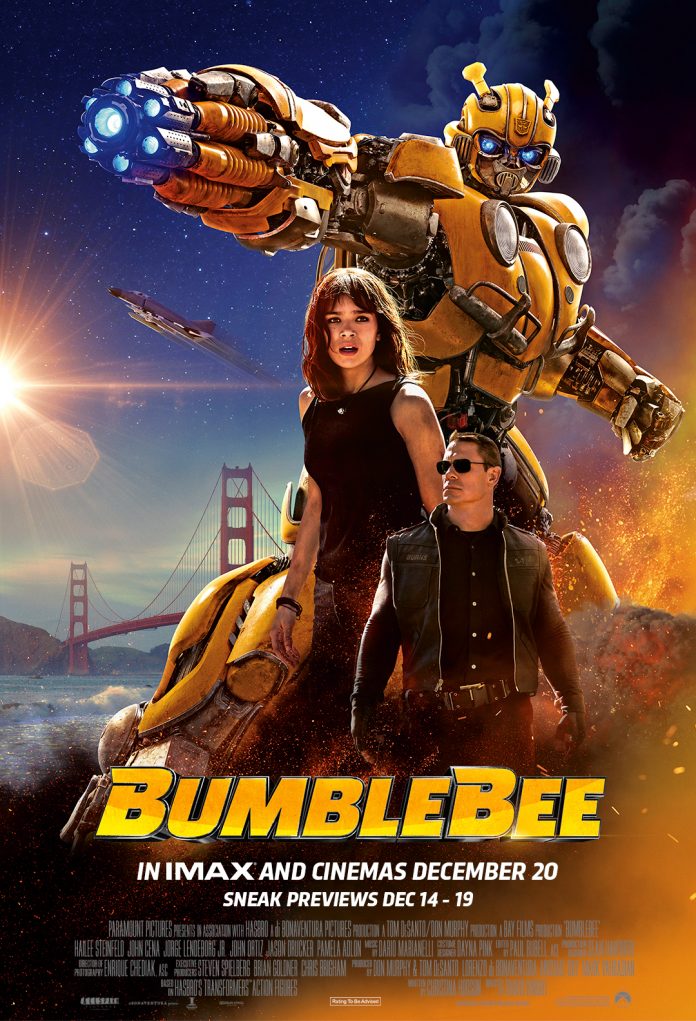 The Low-Down: You’d be forgiven for thinking that Bumblebee is yet another shameless cash-grab by the powers-that-be behind the Transformers franchise. There isn’t much incentive to improve, after all: money keeps pouring in at the box office (especially in China), even as the films – and scripts – have gotten progressively worse and more nonsensical.

And yet, Bumblebee will have you buzzing with delight. In this blockbuster prequel (reboot?) centred on everyone’s favourite sidekick Transformer, everything stale feels fresh again. Most importantly, this film about giant mutating machines has its heart and soul in the right place.

The Good: The Transformers franchise takes a page from the hugely successful Marvel playbook, entrusting Bumblebee to a visionary director who’s as comfortable with telling a story as creating jaw-dropping visuals. (Apologies to Michael Bay, but explosions do not a movie make.) Travis Knight – who gave us the sublime Kubo And The Two Strings – makes his live-action debut with plenty of heart and flair. He lavishes time and care on the film’s emotional beats, grounding it effectively in the tender friendship between Bumblebee and Charlie (Hailee Steinfeld), the mechanically-minded teenager who saves him from a salvage yard. Even with this almost arthouse focus on character development, Knight still delivers no shortage of expertly-choreographed explosions and action sequences.

The Not-So-Good: Bumblebee’s action-packed climactic showdown isn’t half as consequential as it wants to be – indeed, it’s the least interesting thing about the film by far. And it’s not helped by the fact that Charlie and her friends and family seem to be the only humans on the planet worth saving. Jack Burns – played with intermittent charm by John Cena – just barely works as a character, while everyone around him is either forgettably bland or memorably idiotic.

The Nostalgic: Fans of the original Transformers cartoon from the 1980s will lap up all the references and re-designs in Bumblebee. When first stranded on Earth, for instance, our titular hero finds refuge in a familiar form: a canary-yellow 1967 Volkswagen Beetle.

Knockout Performance: Steinfeld hasn’t really managed to find a movie role deserving of the talents she displayed as a young child actor in True Grit (2010) – a performance that nabbed her an Oscar nomination. Who’d have thought that role would come in a Transformers movie? Steinfeld is quite wonderful as Charlie, allowing us to peek beneath her character’s tough exterior to see the oceans of hurt and heartbreak she’s hiding – from her family and herself. She’s remarkably good at playing the hero and the human in Charlie, often at the same time.

Script Tease: There are a ton of eye-popping special effects in Bumblebee, including a fantastic moment in a tunnel when he shrinks and stretches to protect his human cargo. But the real special effect in Bumblebee is the script by Christina Hodson. By injecting heart and humour into her words and characters, Hodson has helped create the first Transformers film that might actuallymake you laugh and cry. Unlike later installments in the series, you’ll actually root for her characters to live onin the sequels. And, as if all that weren’t reason enough to celebrate Hodson’sscript, Bumblebee manages to be fun, funny and also feminist: establishing Charlie as a person and hero first, before giving her full control over when and whether she’ll be anyone’s love interest.

Recommended? Surprisingly, unexpectedly, unreservedly – yes. Bumblebee is the best Transformers film yet, so full of warmth and character that it will leave you wanting more.