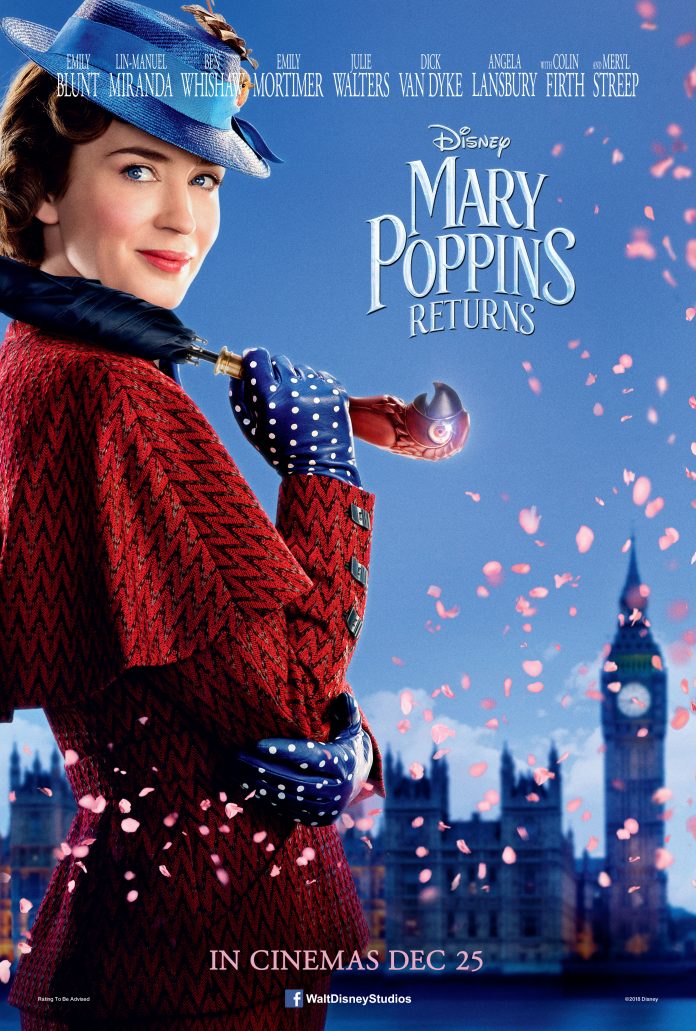 The Low-Down: Disney has been trying to make a sequel to 1964’s Mary Poppins – a classic in every imaginable sense – for decades. But author P.L. Travers, who publicly disapproved of the studio’s adaptation of her books, stood in the way of most early attempts. Ultimately, it’s taken a good 54 years for everyone’s favourite magical nanny to finally return to the silver screen. That’s more than enough time for several generations of children to fall in love with the original film, grow up, and worry that the sequel will ruin their childhoods.

The Story:Mary Poppins (Emily Blunt) returns to Cherry Tree Lane just when two generations of Banks children need her most. All grown-up, Michael (Ben Whishaw) – with the help of activist sister Jane (Emily Mortimer) – is a widower trying to keep it all together after the death of his beloved wife. As he ransacks the family house to ward off the threat of foreclosure by Fidelity Fiduciary Bank, Mary Poppins takes charge of his three children – John (Nathanael Saleh), Annabel (Pixie Davies) and Georgie (Joel Dawson).

The Good: There’s plenty of spark and dazzle in Mary Poppins Returns, but its truest magic comes in the loss and heartbreak layered into its narrative. This time, Mary Poppins isn’t here just to remind everyone to embrace their inner children (as was the case 54 years ago). She’s back to patch up a handful of broken hearts that are sorely missing a mother or a wife. This deep, rich and necessarily darker aspect of the film works wonderfully – its wisdom, depth and maturity will make you weep your heart and your childhood out of your eyes, in a good way.

The Not-So-Good: Less successful is the film’s creaky adherence to the formula established by its predecessor. Meryl Streep – so often the best thing about any film she’s in – is both over-the-top and slightly pointless as Topsy, Mary Poppins’ indiscriminately Eastern-European cousin, and the clear equivalent to the first film’s laughing/floating Uncle Albert. As Jack the lamplighter, Lin-Manuel Miranda leads his fellow leeries in Trip A Little Light Fantastic – a flame-lit number that isn’t half as magical as Step In Time, the glorious chimney-sweep dance in the original movie.

Practically Perfect In Every Way: Blunt may not have Julie Andrews’ soaring soprano (now tragically lost to us all), but she makes the iconic character thoroughly her own. She’s wonderfully adept at playing the heart of gold, tinged with an unspeakable grief, that lies beneath Mary Poppins’ sarcasm and stiff upper lip. It’s a shame, though, that her character almost fades into the background in the film’s final act. There’s a climactic moment featuring Big Ben and a lot of ladders that will make you wonder why Mary Poppins doesn’t get involved sooner rather than later.

Jack Of All Trades:At some point in the sequel, we’re informed that Dick Van Dyke’s Bert – everyone’s favourite chimney sweep with the godawful Cockney accent – is off having untold adventures. His replacement is Jack, who literally brings light to the streets of London, and helps to take it away. Jack is mostly charming, but doesn’t have quite the snap and fizzle of his predecessor. That’s likely because Miranda – an unqualified creative genius (Hamilton ftw!) – isn’t quite as strong an actor as he is a wordsmith. While he improves (very marginally) on the Cockney accent, he lacks the on-screen presence and charisma that Van Dyke has in spades.

High Score: Marc Shaiman of Hairspray fame has created a score that’s eminently lovely and accomplished. It’s been criticised as forgettable, especially in contrast with the numerous breakout hits from the first film. But the Sherman brothers’ score has had 54 years to soak into the cultural consciousness. On their own merits, Shaiman’s songs are wonderfully tuneful, alternating jaunty numbers like Can You Imagine That? with sob-inducing ballads like A Conversation. If nothing else, Shaiman gives us The Place Where Lost Things Go – a modern classic built out of love and loss that will settle in your heart, where all the lovely, sad, joyful things go.

Watch Out For: Two absolutely fantastic cameos that will make your soul sing. Van Dyke’s return to the franchise – at the venerable age of 93 – is pretty much the most magical moment in a film that’s deliberately packed full of very magical moments. And we defy your Disney-loving heart not to swell with joy when Dame Angela Lansbury makes her appearance!

Recommended? Yes. Mary Poppins Returns often goes too far in the wrong direction when it tries to be a homage to the first film. But, when it does its own thing, the final result is both wonderful and wondrous.