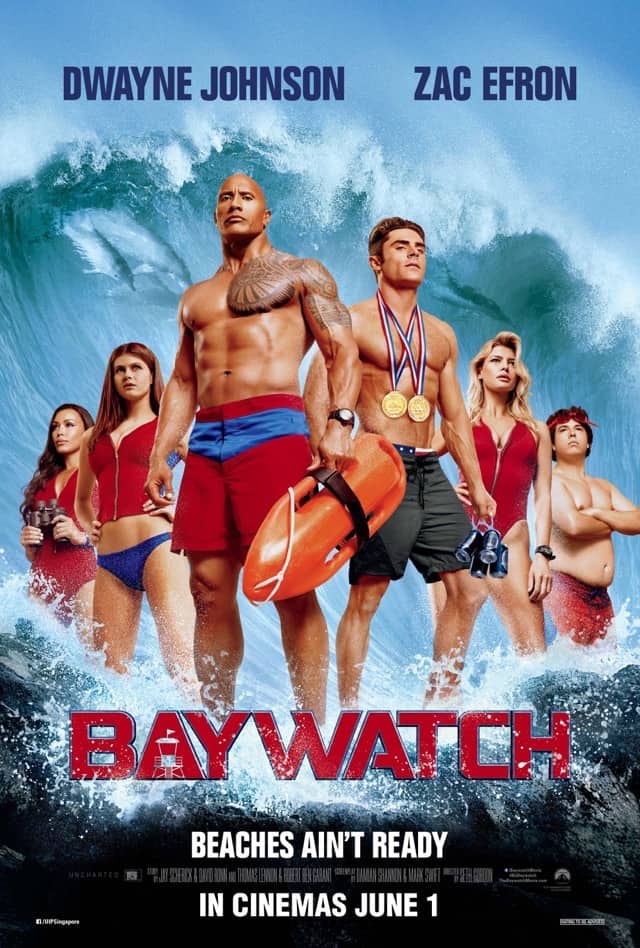 Let’s dive into some ‘90s nostalgia that’s been given an irreverent update, to see if the water’s still inviting. Dwayne Johnson stars as Mitch Buchannon, who leads an elite team of lifeguards known as ‘Baywatch’, including C.J. Parker (Rohrbach) and Stephanie Holden (Hadera). Thorpe (Huebel), Mitch’s boss, assigns disgraced Olympic swimmer Matt Brody (Efron) to the team. Brody, alongside lifeguard hopefuls Summer (Daddario) and the nerdy Ronnie (Bass), joins Baywatch. Brody goes about pursuing Summer, while Ronnie nurses a crush on C.J. Brody’s cockiness creates friction between him and Mitch, throwing off the team’s finely-tuned synergy. In the meantime, wealthy developer Victoria Leeds (Chopra), who just might be using her fancy country club as a front for criminal activities, attracts the suspicion of the Baywatch crew. With a string of murders frightening beachgoers away, it’s up to Baywatch to restore order and bring back the fun under the sun.

For a film about such athletic characters, Baywatch is lazy – that is its primary shortcoming. The formula of adapting a TV series into an R-rated send-up of the source material worked wonders for 21 Jump Street, but when CHIPs tried to follow in those footsteps, it crashed and burned. Because the Baywatch TV series is generally viewed as a cheesy guilty pleasure, it stands to reason that there would be a lot to make fun of in a big screen pastiche. However, there’s very little wit on display, and not a lot of energy fuelling the rampant silliness. The plot is generic, many of the jokes miss their target, and the action sequences are underwhelming. A signature set piece involving a blazing yacht features markedly unconvincing computer-generated fire, and you’ll witness more impressive jet ski tricks at the Waterworld stunt show in a Universal Studios theme park.

With the budget of a big summer movie, Baywatch had the potential to go balls-out, indulging in over-the-top spectacle and comic action that wouldn’t have been possible in the TV show and the subsequent made-for-TV movies. It seems that Baywatch is pandering squarely to the dude-bro set, and many jokes are of the “ew, men touching other men, how gross!” variety. Yes, both the men and the women in the cast showcase their impressive physiques, but weirdly enough, there’s no female nudity. There’s male frontal nudity, but not from who you’d expect. Johnson himself promised “gratuitous boobs, bums, abs, whatever” when promoting the movie. Perhaps this was edited out at the last minute – but all the swearing and the aforementioned male nudity is intact, so it couldn’t have been to secure a more lenient rating.

Much of the film is riding on the brawny shoulders of Johnson and Efron, but both actors’ natural charisma only carries things so far. Johnson plays yet another no-nonsense noble hero who looks out for his team. He’s good at this, but there isn’t as much of the nigh-ridiculous, yet awesome near-superhuman quality he’s displayed in the Fast and Furious films.

Efron plays the same character he’s played in much of his recent career: the lunk-headed, vain hunk who’s a big show-off, but who eventually becomes sympathetic. Most of the back-and-forth between Mitch and Brody consists of the former calling the latter mocking nicknames, including one that’s pretty meta. Unfortunately, the chemistry between Johnson and Efron doesn’t reach the heights this reviewer hoped it would.

What would Baywatch be without women running in slow motion? There’s a fair bit of slow-mo jogging down the beach, but there’s also an effort to make the female characters more than mere eye candy. Daddario’s Summer is the most knowledgeable member of the team, while Hadera is lean and formidable as Stephanie, Mitch’s second-in-command. Rohrbach has the responsibility of filling the sizeable, uh, shoes left by Pamela Anderson. As C.J., she has enough of the blonde bombshell quotient, but lacks comedic chops.

Baywatch falls back on that hoary trope of the awkward geeky guy slobbering after the unattainable hot girl, and it’s often grating. The mere fact that Bass’ Ronnie is nowhere near as toned as the other characters is meant to induce laughter, and the character’s establishing moment involves him getting his private parts stuck in a deck chair. It’s yet another sign of the film’s laziness.

Chopra’s Victoria is a wannabe Bond villain – she even says the line “I’m not a Bond villain…yet.” Chopra brings industrial-strength strut to the role, but the character of the evil land developer is so played out that it’s boring, even if this archetype is usually male. She even has lumbering, suit-clad henchmen doing her bidding. There is some fun to be found in Victoria’s final showdown with Mitch and Brody, though.

Even when David Hasselhoff and Pamela Anderson make their requisite cameos, it fails to enliven the proceedings, because there’s nothing particularly creative about their guest appearances. What could’ve been wickedly goofy, raunchy and exciting is instead a ho-hum production line comedy offering – not even the combined biceps of Dwayne Johnson and Zac Efron can haul this above mediocrity.

Summary: Instead of being risqué, action-packed and subversively funny, Baywatch sinks like a stone, even with several likeable cast members on board.