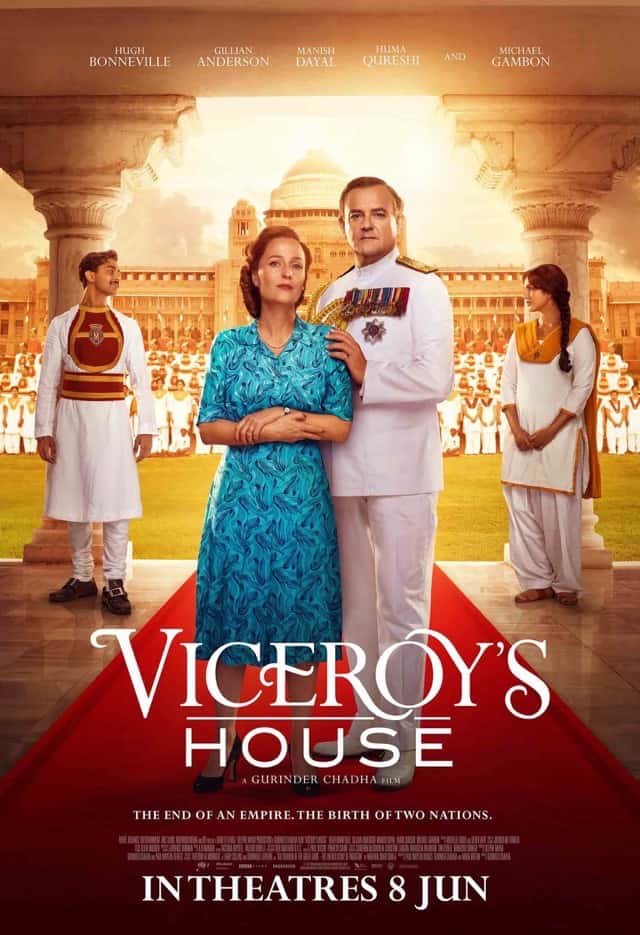 Director Gurinder Chadha takes us inside the Viceroy’s House amidst the tumult of the Partition of India. It is 1947, and Lord Mountbatten (Bonneville), the last Viceroy of India, has arrived in New Delhi with his wife Lady Edwina Mountbatten (Anderson) and their daughter Pamela (Travers). Mountbatten is tasked with overseeing the English withdrawal from India, after a 300-year presence in the country. As unrest among Hindus, Sikhs and Muslims erupts across the nation, Muhammad Ali Jinnah (Smith) of the All-India Muslim League champions the formation of Pakistan, a nation-state for the Muslim minority to call home. Mountbatten meets with Jinnah, Jawaharlal Nehru and Mohandas Gandhi (Kabi), as the schedule for independence is moved up.

In the meantime, Jeet Kumar (Dayal), a new member of staff at the Viceroy’s House, falls in love with Aalia Noor (Qureshi), an assistant to Pamela. Jeet was a prison guard who was sympathetic towards Aalia’s blind father Ali Rahim Noor (Puri) when he was imprisoned. However, their love is forbidden because Jeet is Hindu and Aalia is Muslim. Furthermore, Aalia is promised to Asif (Arunoday Singh), who has just returned from combat overseas. With the tension manifesting itself within the over 500-strong staff of the residence, Mountbatten finds himself in a house, and a nation, divided.

The Partition is a historical event that has repercussions to this day and this year marks its 70th anniversary. It is understandable that Viceroy’s House would be controversial, with some accusing the film of being revisionist history. Pakistani poet and member of the Bhutto political dynasty Fatima Bhutto decried Viceroy’s House as a “servile pantomime”. Director Chadha, who co-wrote the screenplay with her husband Paul Mayeda Berges and Moira Buffini, took inspiration from the non-fiction books The Shadow of the Great Game: The Untold Story of India’s Partition by Narendra Singh Sarila and Freedom at Midnight by Dominique Lapierre and Larry Collins. This reviewer will admit to knowing very little about the Partition of India and is frantically researching as he types. What we’re sure of is that as with every historical occurrence, there are a great many sides to the story. Chadha is cognisant of this, opening the film with the quote “history is written by the victors”. However, there’s a niggling lack of authenticity, a sense that this is a skewed point of view.

Viceroy’s House is an ambitious undertaking, because it attempts to neatly package deeply-complicated politics and tragedy on a vast scale into a Merchant Ivory-style period piece. It’s clear that Chadha did not set out to misrepresent or offend anyone – in 2005, Chadha visited her grandfather’s home in Pakistan for the documentary series Who Do You Think You Are? This was the home he was forced to vacate when he was displaced during Partition. While Chadha’s personal connection to the story cannot be denied, there are times when it seems she has bitten off more than she can chew. Perhaps this story would be more suited to a miniseries format, as there so many players and moving parts.

While actual historical figures play an important role in the plot of Viceroy’s House, the romance between Jeet and Aalia is the audience’s way in. Both Dayal and Qureshi are lively, watchable performers and they lend this love story its sweet and moving moments but it’s obvious that this fictional subplot was tacked on to add accessibility. There’s every chance that a relationship like Jeet and Aalia’s could have developed in the actual Viceroy’s House, but this is a device that’s recognisable from many earlier historical films. It’s not the best comparison but think Jack and Rose in Titanic, or the recent film Bitter Harvest about the Holodomor genocide-famine in Soviet Ukraine. Instead of adding humanity, this sometimes-clumsily executed romance adds artifice.

The cast makes one wish this were a six-episode-long TV event, because then we’d get more time to see the character dynamics play out. Mountbatten is depicted as a man of noble intentions and that everything that went awry during the Partition was a result of him being kept in the dark. It seems most historians beg to differ. Bonneville is refined and respectable but not terribly interesting. Anderson’s Lady Mountbatten is shown as striving to be inclusive and to understand the plight of everyday Indian people, eager to go beyond the walls of the House. Travers’ Penelope is a little bit of a spoiled princess but ends up being pleasant to watch.

Smith is a charismatic presence as Jinnah, the film taking the effort to flesh out his arguments. Kabi is convincing as Gandhi, having also played the role in the television series Samvidhaan: The Making of the Constitution of India. Viceroy’s House marks one of the final film appearances of the late Om Puri, a towering figure in Indian cinema. As Ali Rahim Noor, Puri exudes good-natured wisdom.

Throughout Viceroy’s House, one can sense the filmmakers tiptoeing through history, afraid to make any bold statements. The film is lovely to look at, with location filming in Rajasthan, India lending it high production values. However, it also feels distant and rigid. Even though this is a subject close to Chadha’s heart, it’s one that’s difficult to explore – let alone in the relatively brief 106-minute running time of the film. It’s a film about a fraught period in history which, any way one looks at it, is challenging to portray objectively and coherently.

Summary: Viceroy’s House appears to simplify and sanitise the complex conflict that precipitated the Partition of India, but it functions competently as a period drama.