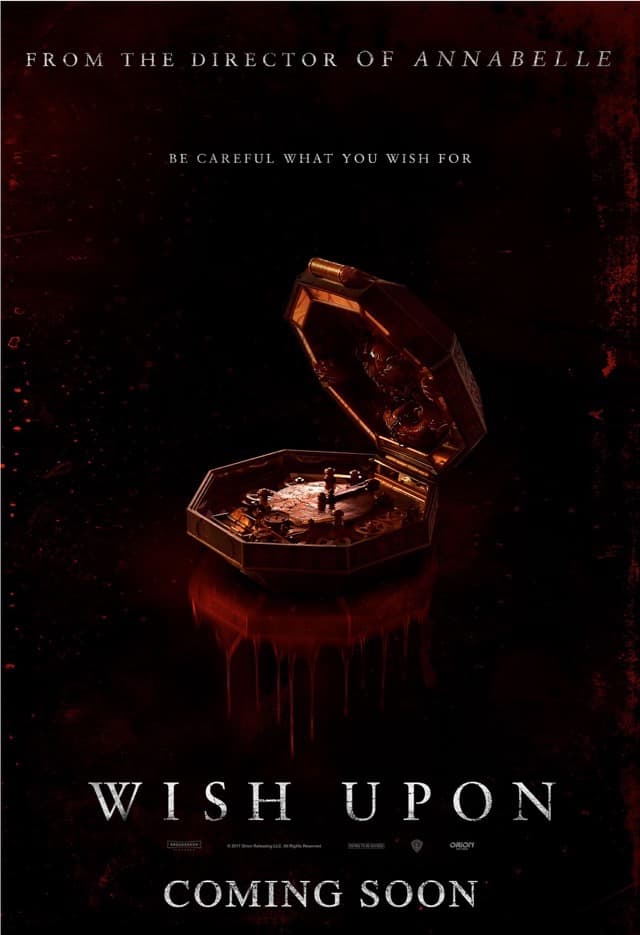 Wishing upon a star seemed like a fairly harmless exercise for Pinocchio. Wishing upon a Chinese music box is a different story. In this horror flick, Clare Shannon receives a mysterious box from her father Jonathan (Phillippe), a rag-and-bone man. The box, inscribed with ancient Chinese characters, promises that it will grant the user seven wishes – for a price. Not taking its power seriously, Clare uses the box to enact revenge on Darcie (Langford), who has been bullying Clare at school. She also wishes for Paul (Mitchell Slaggert), the boy she has a crush on, to fall madly in love with her. Clare’s best friends Meredith (Park) and June (Purser) get drawn into the eerie goings-on and deaths that seem to follow Clare around. Ryan (Ki-Hong Lee), who has a crush on Clare, offers to take the box to his cousin Gina (Alice Lee), so she can translate the inscription. Gina uncovers the box’s dark secret, and everyone is powerless to stop the horrors it unleashes.

Wish Upon plays on the old ‘be careful what you wish for’ adage, while also hinging on the classic horror movie device of a cursed artefact. It’s a variation on the short story The Monkey’s Paw by W. W. Jacobs, in which the titular object grants wishes but punishes the user for meddling with fate. Wish Upon also recalls the Wishmaster series with its sinister genie, and the deaths depicted are Final Destination-esque, albeit not as elaborate. As with many a teen-aimed movie before it, the dialogue strains to sound contemporary, and is sometimes unintentionally silly. Because of its PG-13 rating, Wish Upon doesn’t linger on the gruesome deaths. This means it isn’t gratuitous, but it also means that the consequences don’t carry too much weight. Final Destination let its inventive, gory deaths play out in full, because cutting away from them would diminish the selling point. Because we don’t see the deaths play out, they aren’t as unsettling or disturbing as they could’ve been.

The film also employs a familiar structure, in which the protagonist unwittingly makes a deal with the devil – her wishes will be granted, but horrible fates will befall those she holds dear. We also get the requisite exposition-heavy scene of the characters doing a Google search to figure out what’s going on, as we are told the back-story of the music box. While the music box prop itself looks finely crafted and is reasonably spooky when it opens by itself, the accompanying mythos isn’t sufficiently interesting. The invoking of Chinese culture and superstition is meant to add a textural element, but this is under-developed. We’re relieved Wish Upon doesn’t fall back on an elderly Asian antique store owner to explain its central cursed artefact – instead, we get a tattooed young woman to fulfil that function in the plot.

Horror movies starring teenagers tend to have annoying characters, and one of Wish Upon’s strengths is that it acknowledges its heroine’s flaws while keeping her sympathetic. Having suffered from a family tragedy and being bullied by the popular kids in school, it’s easy to see why Clare might be frustrated. King, who also starred in the horror films The Conjuring and Quarantine, does a fine job as a relatable teen character. It does get to a point where one wonders why Clare isn’t more suspicious of this box that eerily unlatches and plays music on its own any earlier in the story.

Ki-Hong Lee demonstrates his ability to pass for a high-schooler at age 30, and is likeable enough as the guy whom Clare places in the dreaded friend zone. Park can come off as a little annoying, and her character seems more like she would fit in with the stuck-up popular kids than with Clare. Purser, best known as Barb from Stranger Things, is underused as ‘the other friend’. Twin Peaks star Sherilyn Fenn doesn’t get too much to do either. The film aims for depth depicted in the strained relationship between Clare and her father, but because Phillippe is as handsome as he is, it’s hard to buy him as a down-on-his-luck average Joe digging through the trash for scraps.

Wish Upon might not be as actively grating as most teen-centric horror films of its ilk, but it’s too derivative to be truly scary. Director John R. Leonetti, who also helmed Annabelle, passes up a chance to meaningfully develop an engrossing mythology around the music box, and the ending is as unsatisfying as it is shocking. Stick around past the main-on-end titles for a sequel bait stinger scene.

Summary: The teen target audience might be spooked but horror aficionados won’t find too much of value when they look in the cursed music box.