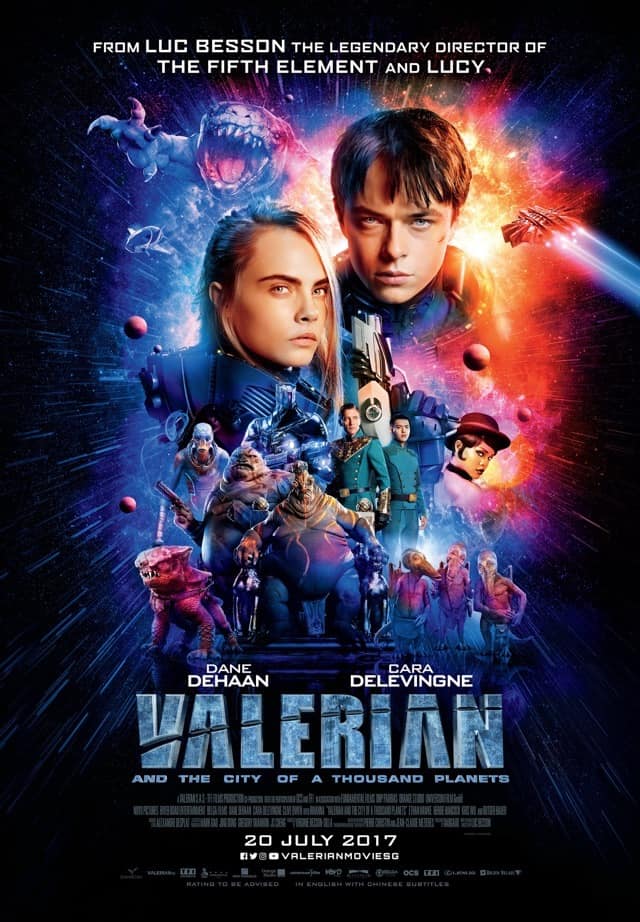 20 years after The Fifth Element, Luc Besson takes another crack at the space opera subgenre with this sprawling sci-fi epic. It is the 28th century, and Major Valerian (DeHaan) and Sergeant Laureline (Delevingne) are Federation operatives tasked with keeping the peace across the cosmos. Valerian is drawn to Laureline, but because of his reputation as a serial heartbreaker, Laureline rebuffs her partner’s advances. The minister of defence (Hancock) sends the pair on assignment to Alpha, a bustling space station metropolis home to 30 million inhabitants of every conceivable species, nicknamed ‘the city of a thousand planets’. When Valerian and Laureline’s superior Arün Filitt (Owen) is kidnapped, they must get to the bottom of a long-buried conspiracy. Along the way, the pair meets colourful characters including the shape-shifting nightclub singer Bubble (Rihanna) and her sleazy pimp Jolly (Hawke).

Valerian and the City of a Thousand Planets is based on the classic French comic Valerian and Laureline, created by writer Pierre Christin and artist Jean-Claude Mézières and first published in 1967. When writer-director Besson was growing up, the comics were a favourite of his, and they became a strong influence of The Fifth Element. Mézières was a concept artist on that film, and pre-dating that, many French observers noted strong similarities between the aesthetic of Star Wars and that of Valerian and Laureline. An anime adaptation called Time Jam: Valerian and Laureline was made in 2007, but a feature film adaptation hasn’t been made until now.

This is clearly a labour of love for Besson, and it’s abundantly obvious that lots of people put staggering amounts of effort into bringing this film to fruition. Environments bursting with imaginative detail are all over the movie. There is extensive, expansive visual effects work from vendors including Weta Digital, ILM, Rodeo FX and Hybride. While the film is fun to look at, after a certain point, it becomes exhausting, as if one has gotten indigestion after a feast for the eyes. This is yet another example of an adaptation being late to its own party – in between 1967 and now, audiences have seen similar visuals in many sci-fi films and TV shows. Beyond the obvious Star Wars and Star Trek connections, Valerian is also quite reminiscent of the Mass Effect video games. There is a race of slender, sylph-like tribal aliens with translucent, glowing skin, which will instantly conjure up memories of the Na’vi from Avatar.

Besson busies himself far more with the world-building than with developing the story. The plot is surprisingly difficult to follow, until everything is laid out in an exposition-heavy scene towards the film’s conclusion. While the action set pieces and chases are relatively thrilling, every other scene feels like a diversion, and it seems like we take extended breaks from furthering the plot to poke around some corner of some extra-terrestrial city. Our heroes don’t go through that grand an arc, and because of the episodic nature of the central adventure, it seems like we’re watching a stretched-out episode of a TV series. Audiences might be tired of origin stories, but perhaps that would have served this well, since most viewers outside France aren’t overly familiar with the property.

The film’s biggest weakness is the casting of its two leads. At every turn, DeHaan and Delevingne look woefully out of place amidst the dazzlingly designed surroundings. Valerian and Laureline should be swashbuckling action heroes, charismatic, larger-than-life figures. DeHaan and Delevingne aren’t the obvious picks to lead a sci-fi action adventure, and that’s a significant problem. Leaning into, instead of rejecting, the archetypes would play better, since this is something of a tribute to the space opera genre. Beyond their inability to convincingly inhabit the other-worldly environments, DeHaan and Delevingne have minimal chemistry with each other. The bickering rom-com relationship is tiring rather than tantalising, most of their interaction consists of Valerian harassing Laureline, and a lot of their dialogue borders on Star Wars prequel, Padmé and Anakin cheesiness.

The movie is packed with characters, but none of the supporting cast has that big an impact on the story. Owen does next to nothing, and Kris Wu stands around the control room a bunch. Hancock mostly appears as an image on the screen giving orders to our heroes via video call. Rihanna gets an extended dance sequence, which is entertaining, but is yet another moment when it feels like the story comes to a screeching halt to turn its attention to a distraction. Her character Bubble is sympathetic and is more interesting than either Valerian or Laureline, but she’s only in the film for a bit. Hawke has fun as the cheerfully cruel Jolly, but it amounts to little than a cameo.

Valerian serves up spectacle in spades, and packs in a lot of weirdness that’s sufficiently different from standard Hollywood blockbuster fare. However, it can’t help but feel derivative, even if its source material is a progenitor of the media that this film appears to borrow from. This is meant to be a light-hearted jaunt, but a key plot point centres on war crimes and genocide. It’s often close to being immersive, but is hampered by marked unevenness and miscast leads.

Summary: Visually, Valerian and the City of a Thousand Planets serves up bang for your buck, but no matter how dazzling the effects or how thrilling the action, you’ll have a hard time believing Dane DeHaan and Cara Delevingne as space-hopping super agents.