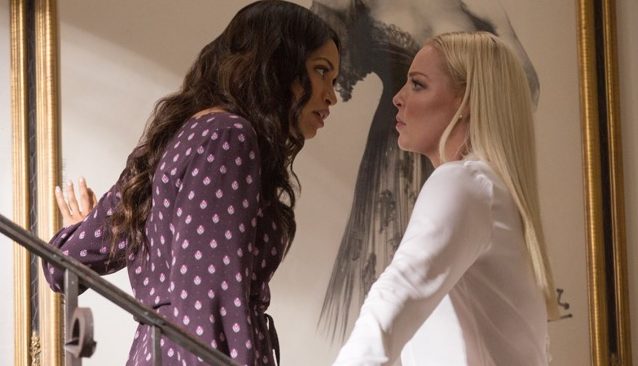 Katherine Heigl stars as Tessa Connover, who is barely coping with the end of her marriage when her ex-husband, David (Stults), becomes happily engaged to Julia Banks (Dawson) — not only bringing Julia into the home they once shared but also into the life of their daughter, Lilly (Isabella Rice). Trying to settle into her new role as a wife and a stepmother, Julia believes she has finally met the man of her dreams, the man who can help her put her own troubled past behind her. But Tessa’s jealousy soon takes a pathological turn until she will stop at nothing to turn Julia’s dream into her ultimate nightmare.

QUESTION: This film was quite a ride, and also makes you think. How did this story come about and, Denise, when did you make the decision to direct?

DENISE DI NOVI:   I’ve been a producer many years and partnered with Alison and we had been developing the script with another woman director, who left when one of the films she was producing got green-lit. We had prepared a list of other women directors for Warner Bros., which asked me to direct the film. I have been at Warner Bros. for over 20 years and they know me very well, and I’ve produced many different kinds of movies.

As terrifying as it was to think about making that transition, it was really a thrilling opportunity and I was very grateful. I jumped in a hundred percent.

It was great to collaborate with Alison Greenspan, who I’ve been working with for over 16 years. We both connected with the story very deeply—this tyranny of perfectionism, that we feel like we have to be perfect at everything and do everything right, and we can’t share our weaknesses, or the truth of who we are.

At the same time, the film is a really fun ride and a classic thriller. I’ve always been a fan of the genre. Adrian Lyne is one of my favorite directors. So it looked like a great combination.

ALISON GREENSPAN: Just to add to that, I have had the privilege of working with first-time directors, but because Denise is a powerhouse producer with an incredible breadth of experience. So it was a very seamless transition to her directing.

QUESTION: Rosario, what drew you to the role?

ROSARIO DAWSON: What I loved about this film was the opportunity to work with remarkable women and tell a multi-faceted story about two women struggling with the idea of perfection and how each gets lost along the way.

QUESTION: How did you approach your respective characters?

KATHERINE HEIGL:   We all worked together on that. Julia’s drive for perfection sets the tone for me—the way she would hold herself and do her hair. It works great for the film, but it didn’t work great for my head (laughs).

DENISE DI NOVI:   There was a lot of upkeep on the hair (laughs).

KATHERINE HEIGL:   That’s how I started to dive into Tessa’s personality, because there’s something about the clothing, the shoes, the hair, the makeup, and how it all changes the way she holds and expresses herself. I also feel some sympathy and compassion for Tessa, so that she doesn’t appear to be always maniacal. Tessa is heartbroken and insecure and afraid, and didn’t know how to deal with any of it.

QUESTION: How did you come to cast Cheryl Ladd as Tessa’s mother?

DENISE DI NOVI: I’m so grateful to have Cheryl in the film. I was really nervous about finding someone who could be believable as Tessa’s mother, and who had equal beauty, intelligence and perfectionism. I mean, look at Cheryl and Katherine; they’re just so perfect together.

QUESTION: Cheryl, how did you prepare for the role?

CHERYL LADD: Again, it’s all about the hair, which reflects Helen’s attitude. I feel that she comes from a long line of perfectionist women and that expectations were very high, while emotion was suppressed.  She thinks she’s the greatest mother on the planet because she loves her daughter, but the demand of that perfection and her inability to hide her disappointment just crushes Tessa.

QUESTION: Geoff, what was it like to work with all these strong women?

GEOFF STULTS: All I know is that two really beautiful women were fighting over me. So I was happy. (Laughs)

My character, David, is doing the best he can with raising his child with Tessa, while falling in love with Julia. It’s not easy.

DENISE DI NOVI:   Geoff did make it look easy, but if I did not have a guy who you would believe that both of these women would go this far for, the movie would not have worked. You believe that David wants to do the right thing. He wants to be a good ex-husband, a good co-parent and a good new husband. He’s trying hard and has a lot of integrity. But it’s a more difficult role to pull off than you might imagine. I think he did a great job.

QUESTION: Katherine, Tessa’s movements and mannerisms are so measured and precise. Did you draw that from someone in particular?

KATHERINE HEIGL:   Not from anyone specifically. Those mannerisms did cause a lot of back pain after a while. She holds herself very stiffly, but I think a lot of that is because Tessa is wound so tightly.

QUESTION: Rosario, your character, Julia, is a victim of domestic violence. Did you research that subject?

ROSARIO DAWSON: I’ve been a spokesperson for different campaigns helping victims of domestic violence, including Purple Purse Campaign. I’m on the board of V-Day campaign to end violence against women, and I’m on the board of Riverside Girls’ Club. So that was a big consideration in playing Julia, who’s gone through all of that, which is why she can have love in her life. She did that work, looked at her pain, and she dealt with it.

That also points to the critical relationship between Julia and her boss and best friend, Ali played by Whitney Cummings, because she’s the only person in Julia’s life who knows her true journey.

QUESTION: How did you avoid making Tessa cartoonish, and at the same time find that level of craziness that made her so scary?

KATHERINE HEIGL: It really starts with compassion. I had compassion for Tessa and I felt sorry for her, and I identified with her fear. Her “crazy” is really born out of insecurity and fear and the idea that she is terrified of not achieving perfection in her life, in her marriage, with her child and in herself. She believes that without this perfection, her whole world will fall apart. The desperation to hold onto it is what drives her to make choices that any sane person wouldn’t make.

DENISE DI NOVI:   It was really important to me that audiences have compassion for Tessa. When you meet her mother, you see what she’s gone through. You’re terrified of Tessa, but you also have moments where your heart goes out to her.

QUESTION: There are some very sexy scenes in the movie. Is it easier having a woman at the helm for those scenes?

GEOFF STULTS: There’s nothing gratuitous about them. They serve a purpose. Denise put a lot of care and thought into those scenes.

DENISE DI NOVI:   Having been on the set as a producer during the filming of these kinds of scenes, I knew what I didn’t want to do. They’re very difficult to shoot. They’re very uncomfortable for people, no matter what they say. I really wanted those scenes to be important story points and have an emotional impact. Thanks to the actors’ performances, you really feel what’s going on; it’s not just about watching them have sex.

QUESTION: This film deals with a scary contemporary issue, which is online privacy. Can you talk a little bit about that aspect of the story?

DENISE DI NOVI:   That’s when Tessa crosses the threshold—when she does online “catfishing” and lures Julia’s abusive ex-boyfriend into trying to reconnect with her. People told me that it happens all the time. It’s terrifying because it’s a violation. It really can hit you where you live emotionally, and make you vulnerable. You can’t control it.

Unforgettable opens in cinemas 4 May 2017.