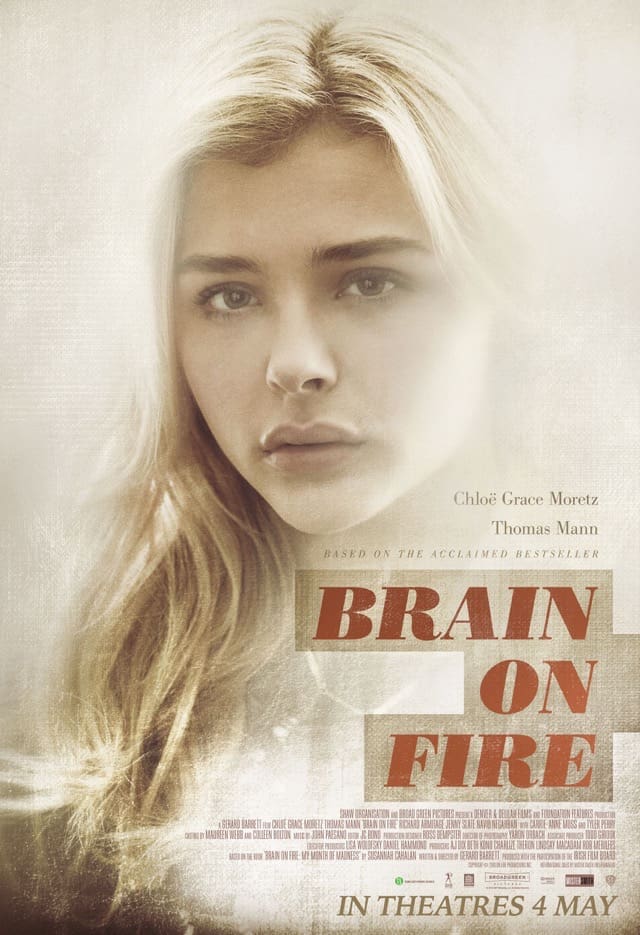 In this biopic/medical drama, Chloë Grace Moretz finds her life spinning out of control, and she doesn’t know what’s causing it. Moretz plays Susannah Cahalan, a 21-year-old reporter for the New York Post. Susannah befriends her colleague Margo (Slate), and her stern but fair boss Richard (Perry) views her as a rising star in the bullpen. She’s dating a sweet aspiring musician named Steven (Mann), and all seems to be going well. Suddenly, with no prior history of mental illness, Susannah suffers a breakdown, starts hallucinating and having seizures. Her divorced parents Tom (Armitage) and Rhona (Moss) are understandably worried for her, as various diagnoses come back inconclusive. With not just her job but her life threatened by this mysterious condition, only neurologist Dr. Souhel Najjar (Navid Negahban) might be able to get to the bottom of Susannah’s circumstance.

Brain on Fire is based on the memoir of the same name by the real-life Susannah Cahalan. Charlize Theron optioned the film rights and dropped out of a supporting role, but remained onboard as a producer. Any film that deals with a rare illness, particularly one which affects the mind, is in danger of being manipulative. Writer-director Gerard Barrett succumbs to the tropes one often sees in movies or TV shows in which characters suffer mental breakdowns. However, he strikes a fine balance of making the audience uncomfortable by depicting the harrowing effects of anti-NMDA receptor encephalitis, while refraining from making things exploitative. Brain on Fire often feels like the ‘Hollywood version’ of Susannah’s experience, but it’s engaging and sufficiently credible even as it feels a little overwrought.

One of the themes that drives the story is the feeling of powerlessness that a young person can have when stepping into the adult world. Susannah is fresh out of college, and initially attributes her symptoms to simply being overwhelmed. Irish writer-director Barrett is himself young and successful – this is the 29-year-old’s third feature film. Upon finding out Barrett’s age, a sense of ennui washed over this reviewer. The story takes place in New York City, arguably one of the worst places in the world to suffer from a sudden mental breakdown. Unfortunately, Vancouver doesn’t do the best job of doubling for the Big Apple in this case, especially because Brain on Fire doesn’t quite convey the overwhelming sensory stimulus of New York City.

Dakota Fanning was originally cast in the role of Susannah, with scheduling conflicts leading to Moretz replacing her. Moretz’s bubbly demeanour makes Susannah a pleasant protagonist to begin with, which means it’s easier with the audience to stick with her as she experiences the crushing lows and unsettling delirium that she does. It’s a fine performance, but as one would expect, also a showy one. It’s easy to overplay struggling with an affliction physical or mental, with the unfortunate implication over the years being that if actors want to win awards, they’ll play characters who are stricken with grave illnesses. What helps mitigate this cynicism is the knowledge that Susannah Cahalan is a real person, who had to sign off on this portrayal of her. Even if Moretz’s acting borders on over-the-top, she keeps Susannah feeling like an actual person as she rides the frightening roller coaster that is anti-NMDA receptor encephalitis.

The supporting cast is fine, but each character falls to neatly into boxes labelled with their archetypes. Mann’s Steven is the dopey, devoted boyfriend – he seems a better fit for the role than the initially-cast Will Poulter. Slate’s Margo is the upbeat friend from work, while Perry’s Richard is more or less Laurence Fishburne as Perry White in the DC Extended Universe movies. It’s not a huge role, but Perry gets to show that he has decent acting chops when he’s not in anything he writes or directs. As the concerned parents, Armitage and Moss don’t get too much to do, and Armitage wrestling with his accent is more than a little distracting.

While it is heart-rending to watch Susannah go through hell as her loved ones are rendered helpless, the parts of the film that deal with the medical theory are somewhat more interesting. Barrett is conscious that too much jargon might bore audiences. As such, Negahban’s warmth and quiet intelligence is greatly welcome. The film highlights how much harm misdiagnoses can be – it’s estimated that only 10% of people who have anti-NMDA receptor encephalitis were properly diagnosed at the time.

As heartless as it sounds, Susannah Cahalan’s ordeal is far from the most dramatic or extreme true story to be brought to the big screen. However, this movie is important in its own way. While the specifics feel embellished slightly, with the romantic and workplace comedy elements of the film too obvious, Moretz’s performance holds one’s attention.

Summary: While there’s the niggling vibe of an illness-of-the-week Lifetime TV movie here, Brain on Fire is mostly moving and the right amount of unsettling.