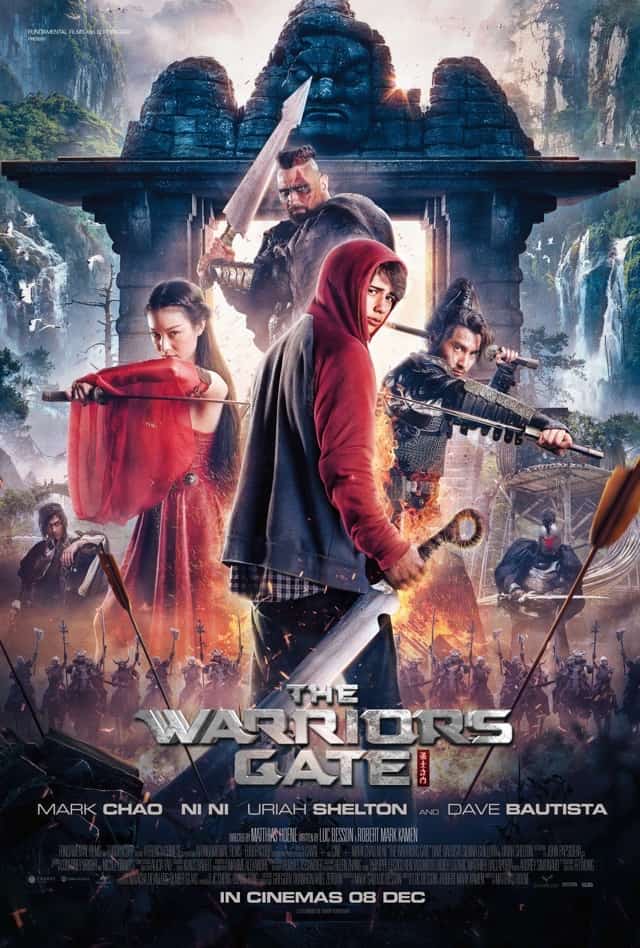 An ancient Chinese kingdom is under threat, and only one person can save the land: an American teen gamer from the year 2015. Jack Bronson (Shelton) spends most of his time engrossed in an online game, taking on the persona of a fearsome warrior called the Black Knight. His single mother Annie (Guillory) is struggling to make ends meet, and their house will soon be foreclosed on. Jack works part-time for antiques dealer Mr. Chang (Mah), who entrusts Jack with a priceless chest. One night, the warrior Zhao (Chao) and Princess Sulin (Ni) emerge from the chest through a portal called ‘the Warrior’s Gate’ into Jack’s bedroom. Zhao gives Jack the mission of protecting the princess. When Sulin is abducted by barbarians, Jack leaps into the chest after her, and is transported to ancient China. Standing alongside Zhao and with the help of the wizard Wu (Ng), Jack must rescue Sulin from the clutches of the ruthless Barbarian king Arun the Cruel (Bautista).

The Warrior’s Gate is a co-production between France’s EuropaCorp and China’s Fundamental Films. EuropaCorp’s head honcho Luc Besson produced the film and co-wrote the screenplay with long-time collaborator Robert Mark Kamen. The Warrior’s Gate comes off as an extremely tired enterprise. It’s a bog-standard coming-of-age hero’s journey story, combined with fish out of water hijinks. It also feels horribly dated, as if the filmmakers are scrambling about wondering “this is what kids these days like, isn’t it?” The production notes refer to The Warrior’s Gate as “an action-packed adventure film with martial arts derring-do, seen through the eyes of a Gen Z video gamer and set to a hip-hop breakdance beat.” Excuse us while we roll our eyes. There’s a BMX bike chase scene straight out of the 90s and our hero has a rotund, bespectacled best friend who says “bro” a lot.

Thankfully, The Warrior’s Gate doesn’t take itself too seriously at all, and several jokes land. It does, however, play the Mary Sue (or Marty Stu) trope painfully straight. A meek teenager who is habitually bullied is suddenly thrust into the middle of a grand adventure where he must beat the bad guys and save the girl despite lacking skills and being unfamiliar with the world. The similarities between The Warrior’s Gate and 2009’s The Forbidden Kingdom are inescapable. In that film, it was a martial arts movie geek rather than a gamer who was pulled through a portal into ancient China, but most of the story beats are the same. The Forbidden Kingdom boasted Jackie Chan and Jet Li going toe-to-toe on the big screen for the first time, in fights that were choreographed by Yuen Woo-Ping. The Warrior’s Gate has nothing close to that.

Shelton, whom teen audiences might recognise from the Disney Channel sitcom Girl Meets World, play the designated white saviour. Somehow, an entire contingent of royal guards who have been trained since birth aren’t good enough to defend the kingdom: we need a modern-day millennial for that. Jack is meant to be a shut-in who gets lost in his video games, but his BMX skills are on par with a professional stunt rider and when we see Jack with his shirt off, dude’s got abs. It’s the kind of role Shia LaBeouf would’ve gotten 15 years ago, and Shelton is frequently just about as annoying.

Taiwanese-Canadian actor Chao, who starred in the TV series Black and White and its big-screen spin-off, does the stoic action hero thing well enough. You know the drill: Zhao thinks little of Jack, but the two eventually bond and learn from each other. Zhao teaches Jack martial arts and discipline; Jack teaches Zhao to loosen up a little. Ni Ni’s Sulin is the spoiled, feisty princess who spends the bulk of the film in captivity. Mah’s Mr. Chang is yet another ersatz Mr. Miyagi – the presence of that hoary archetype is to be expected, given that Kamen wrote the Karate Kid screenplay. As Mr. Chang’s magical ancient Chinese counterpart, Ng is the playful sorcerer with a twinkle in his eye. He sounds like James Hong as Mr. Ping in the Kung Fu Panda films to a distracting degree.

Bautista is a bright spot here. He’s having great fun playing the villainous Arun, who appears to be a riff on Khal Drogo from Game of Thrones. He even gets a dim-witted henchman named Brutus. Thanks to his sheer physical presence and comic timing, Bautista comes off as both funny and imposing. Fans of Hong Kong cinema will enjoy the cameo from Kara Wai, who makes a brief appearance as a mountain witch.

While the sub-par visual effects work is most evident during a fight against a trio of tree monsters, the production values benefit from location filming in China. It’s obvious that Besson is attempting to jump on the Chinese film industry bandwagon, because that’s where all the money is now. The Warrior’s Gate is formulaic and limp, a clear demonstration of how out-of-touch its filmmakers are.